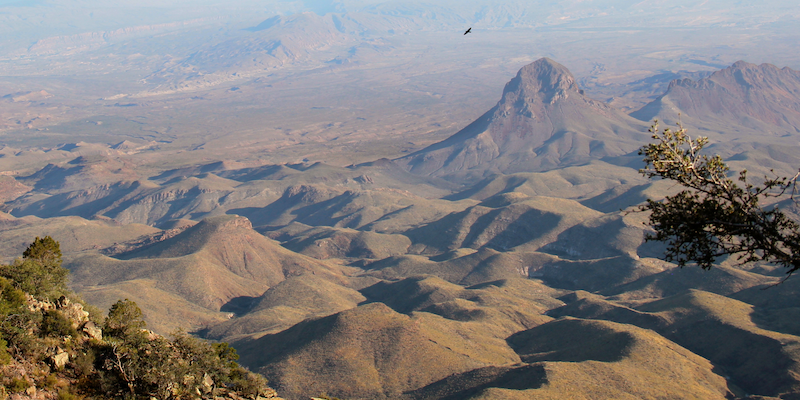 The history of the borderlands is full of murder, theft, banditry, and violence—starting with the Treaty of Guadalupe Hidalgo.

While I probably shouldn’t let you know exactly what happens in my novel In the Land of Dead Horses, I can tell you where and why the action occurs. Much of it takes place in the desolate region shared by western Texas and northern Mexico, and why it happens involves old conflicts between Spaniard and Indian, Mexican and Anglo—clashes that, more times than we might care to admit, have led to violence on both sides of the border.

Fact is, the relationship between the U.S. and Mexico is rooted in crime. Texas’s declaration of independence from Mexico in 1835 was itself considered illegal—sedition—by its mother country. The “peace” that followed Texas’s victory at San Jacinto was hardly peaceful, and led just a few years later to America’s invasion of its southern neighbor. The result of that war was Mexico’s concession of huge amounts of territory in what is now the American Southwest under the Treaty of Guadalupe Hidalgo, and that treaty’s legality has been contested ever since. Indeed, President Ulysses Grant once wondered if there was ever “a more wicked war than that waged by the United States on Mexico.” Our heroes are often Mexico’s villains, and vice versa.

So maybe it’s not surprising that literature concerning the two countries speaks fluently of war, banditry, murder, and theft. The history is there for all to read. But sometimes only the stories of individuals—fictional or real-life—can tell us what that history felt like. Fortunately, there is no shortage of books about living on the border and what it means to cross it. There are classics like Caballero: A Novel, by Jovita Gonzales and Eve Richmond, and Edna Ferber’s Giant, better known now for the beautiful people who populate the film version of the story; ambitious epics such as Philipp Meyer’s The Son and Larry McMurtry’s Lonesome Dove; and science fiction efforts like Fritz Leiber’s A Specter Is Haunting Texas, Roberto Bolano’s 2666, and Fernando Flores’s recent Tears of the Trufflepig.

All are good reading. But to truly understand the currents of violence and criminality that run just below the surface of U.S.-Mexican relations, try these six books. 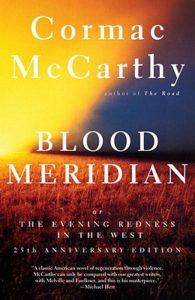 The Jupiter of the border fiction solar system, a sort of Bible of blood and bad feeling, McCarthy’s 1985 masterpiece chronicles the relationship of two men—the Kid and the bizarre, possibly supernatural Judge—as they immerse themselves in murder and mayhem from Texas down into Mexico and back again. Set against the horrific true tale of the 1842 Mier Expedition, Blood Meridian has enough apocalyptic prose and dreamlike distancing to double as a script for the end of the world. Truly horrific and stunning, not quite allegorical but not entirely real either, you’ll want to wash your hands after reading this one—and maybe scrub your soul while you’re at it. For a more recent treatment of similar themes, try the 2021 film “The Forever Purge” (seriously). 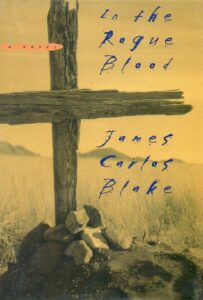 In the Rogue Blood by James Carlos Blake

In some ways even more ambitious than Blood Meridian, Mexican-born Blake’s In the Rogue Blood is an obvious but able McCarthy copycat that chronicles the long, bloody migration of two brothers from the U.S. to Mexico during the Mexican-American War. South of the border, the brothers find themselves on opposite sides of the conflict: One rides with a group of Mexican outlaws helping the American army, while the other finds himself serving in St. Patrick’s Battalion, a contingent of Americans and Europeans fighting for Mexico. It’s a narrative contrivance, to be sure, but it’s one that allows us to better understand Mexican resentment of the American invasion. Published in 1997, In the Rogue Blood is worth a read, but it fails as art somewhere along the way, featuring so many fistfights, knifings, and broken skulls that it forfeits credibility. Blake has made the bloodbath his cup of tea, and has written a number of other novels involving the border, including The Friends of Pancho Villa and a “border noir” series about the piratical Wolfe Family. They’re all crunchy and vivid, but they tend to hit some of the same notes in their gore-soaked sonatas. 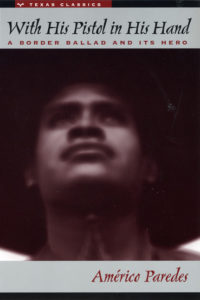 With His Pistol in His Hand by Americo Paredes

One of the most enduringly popular American genres of fiction is the western, which typically features a larger-than-life Anglo male employing righteous violence to bring (or restore) order to a lawless region. Border literature contains plenty of such stories, though the more interesting of them tend to question the accuracy of the cowboy—and, more specifically, the Texas Ranger—mythos. The first important book to peel back the façade surrounding the Texas Rangers, Paredes’s 1958 work examines the legend of Gregorio Cortez, a Tejano who killed a Texas sheriff in 1901 and thereafter eluded (for a time) a massive manhunt by law enforcement authorities, including the Rangers. Paredes’s book is hard to categorize, as it’s part history, part folklore, and part explication of the songs—corridos—that sprung up to lionize Cortez. It has nevertheless grown in stature as it’s aged, and can count itself the spiritual forefather of such recent works as Forget the Alamo: The Rise and Fall of an American Myth. For further investigation of the Rangers’ reputation, see The Injustice Never Leaves You: Anti-Mexican Violence in Texas, by Monica Munoz Martinez; and for a revisionist Ranger, see James Lee Burke’s House of the Rising Sun. 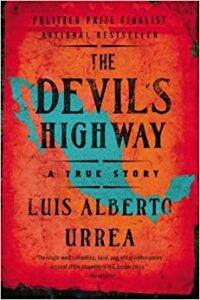 In modern times, the border has become more controversial, less a notional place of transition from one culture to another and more of a physical impediment: a wall, in some places; a fence; a line of cars. Undocumented Mexicans in the United States are considered criminal simply for being in the country. Perhaps the best telling of the horrors and rewards the undocumented face when trying to enter the United States is still The Devil’s Highway, Urrea’s 2004 non-fiction account of a group of Mexican men who take a dangerous route to cross the border into Arizona. Some survive; others don’t. Urrea provides graphic accounts of the would-be immigrants, coyotes, and Border Patrol agents who populate a netherworld most of us only see on TV. See also: The Line Becomes a River, by former Border Patrol agent Francisco Cantu, and All the Agents and Saints, by Stephanie Elizondo-Griest. 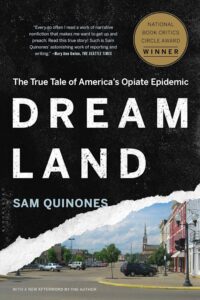 When American health authorities finally realized the dimensions of the opioid crisis decimating the Midwest, supplies of OxyContin and dried up. Addicts turned to a new and distinctive drug to take their place: black-tar heroin from a tiny Mexican state called Nayarit, on the country’s west coast. Drug dealing cells from in and around Xalisco infiltrated small and mid-sized American cities affected by the OxyContin crisis and fueled a secondary wave of heroin addiction. The result was thousands of overdoses, many fatal, and public health costs that will probably never be fully reckoned. Oh, yes, and grief. Oceans of it. In Quinones’s 2015 account, the black tar gangs are made up primarily of young men from starving, stagnant towns, eager to make money from the appetite of avaricious Anglos previously preyed upon by U.S. pharmaceutical manufacturers and unscrupulous physicians. Dreamland questions which nation is the conquered, and which the conqueror, as the U.S. and Mexico continue their decades-old dance of drugs, dependency, and political denial. See also: No Country For Old Men, by Cormac McCarthy, for a fictional (and horrifying) account of narco-violence on the Texas-Mexican border. 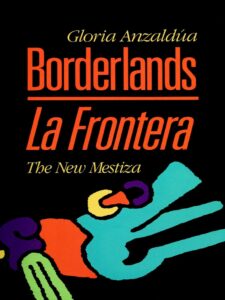 Anzaldua’s 1987 collection of essays isn’t about criminality per se, but it does start with the argument that the Anglo occupation of the Southwest is illegitimate, the result of coercion and broken promises, and thus brings us back to where we started. Anzaldua, who died in 2004, grew up in South Texas, worked in the fields as a child, and eventually made a career for herself in academia, a passionate voice that was both Latinx and lesbian. Her essays, frequently angry, always challenging, and written in a combination of languages, exemplify what it means to be a product of the border, with its varied linguistic and cultural influences. Her attempt to transform herself into something inclusive, not defined by barriers, is her response to the institutionalized marginalization that non-mainstream individuals and cultures experience on a daily basis, and which can serve as the preface to, and excuse for, violence. For a simpler treatment of related ideas—cross-cultural prejudice; transgressive love—with a cautiously hopeful conclusion, see John Sayles’s 1996 indie film, “Lone Star.” 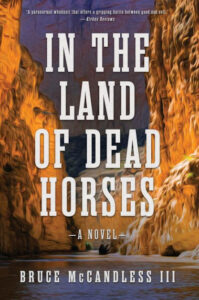 Bruce McCandless III grew up in the shadow of Houston's Johnson Space Center during the Apollo and Skylab eras. He graduated from the Plan II Honors Program of the University of Texas in 1983 and went on to earn advanced degrees from the University of Reading in England and the University of Texas School of Law. After teaching at Saint David's School in New York City, he returned to Austin to practice law in 1995. He is the author of Sour Lake (2011), Beatrice and the Basilisk (2014), and, with his daughter Carson, Carson Clare's Trail Guide to Avoiding Death (And Other Unpleasant Consequences) (2017). Bruce serves on the board of directors of the Worthy Garden Club, an Oregon-based environmental organization, and the Austin Public Library Foundation. He and his wife, Pati McCandless, live in Austin. 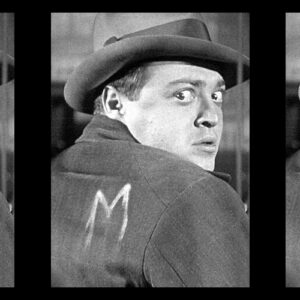