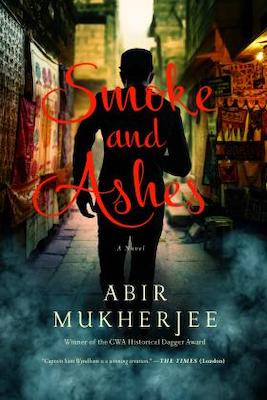 The following is an exclusive excerpt from Smoke and Ashes, the latest in Abir Mukherjee’s historical Calcutta-based mystery series, which finds opium-addicted Captain Sam Wyndham and his Indian Sergeant, Surrender-Not Banerjee, investigating a series of gruesome killings.

It’s not unusual to find a corpse in a funeral parlour. It’s just rare for them to walk in the door under their own steam. It was a riddle worth savouring, but I didn’t have the time, seeing as I was running for my life.

A shot rang out and a bullet flew past, hitting nothing more offensive than rooftop laundry. My pursuers – fellow officers of the Imperial Police Force – were firing blindly into the night. That didn’t mean they mightn’t get lucky with their next round, and while I wasn’t afraid of dying, ‘shot in the backside while trying to escape’ wasn’t exactly the epitaph I wanted on my tombstone.

And so I ran, opium-fogged, across the rooftops of a sleeping Chinatown, slipping on loose terracotta tiles, sending them smashing to the ground and clambering from one roof to the next before finally finding shelter in a shallow crawlspace beneath the ledge of a low wall which separated one building from its neighbour.

The officers drew closer, and I tried to still my breathing as they called out to one another, their voices swallowed by the darkness. The sound suggested they’d separated, now possibly some distance from each other. That was good. It meant they were groping around as aimlessly in the dark as I was, and that for now my best chance of escape lay in staying still and silent.

Being caught would lead to some rather awkward questions which I preferred not to have to answer: such as what I happened to be doing in Tangra in the dead of night, smelling of opium and covered in someone else’s blood. There was also the small matter of the sickle-shaped blade in my hand. That too would be difficult to explain.

I shivered as the sweat and the blood evaporated. December was cold, at least by Calcutta standards.

Snatches of conversation drifted over. It didn’t sound like their hearts were in it. I didn’t blame them. They were as likely to stagger off the edge of a roof as they were to stumble across me; and given the events of the last few months, I doubted their morale would be particularly high. Why risk a broken neck chasing shadows along rooftops, when no one was going to thank them for it? I willed them to turn back, but they doggedly kept at it, tapping in the blackness with rifle butts and lathis like blind men crossing a road.

Being caught would lead to some rather awkward questions which I preferred not to have to answer: such as what I happened to be doing in Tangra in the dead of night, smelling of opium and covered in someone else’s blood.

One set of taps grew louder, a rhythmic presence drawing ever closer. I considered my options, or I would have done, had I been able to think of any. Running was out of the question – the man was armed and sounded so close now that, even in the dark, he’d have little difficulty in shooting me. Taking him on was also a non-starter. I had the blade but I was hardly going to use it on a fellow officer, and, in any case, with three of his colleagues in close proximity, the odds of eluding them were shrinking faster than a poppy at sunset.

The tone of the tapping changed, taking on an echoing hollowness as it struck the thin concrete of the ledge above my head. The man must have been standing directly above me. He too noticed the change in tenor and stopped in his tracks. He knocked at the ledge with his rifle, then jumped down. I closed my eyes in anticipation of the inevitable, but then a voice called out. One that I recognised.

‘All right, lads, that’s enough. Back inside.’

The boots turned towards the command, and for the longest of seconds stood rooted before finally climbing back onto the ledge. They began to move off and I breathed out, then ran a hand, still sticky with blood, over my face.

The voices receded and the rooftops returned to silence. Minutes passed and from the street below came shouts – English, Bengali, Chinese – and the sound of lorries starting up. I stayed where I was, shivering in the confines of the crawlspace, and tried to make sense of it all.

The night had started quite normally, though normal is, admittedly, a relative term. At any rate, tonight seemed no different from any other night that I visited one of the opium dens which pockmarked Chinatown. From my lodgings in Premchand Boral Street, I’d made my way south to Tangra by one of many circuitous routes, to a den I was fairly sure I hadn’t visited for at least a month. This one was in the basement of a row of sagging tenements, entered via a dank stairwell at the back of a funeral parlour that reeked of formaldehyde and the proximity of death. It was one of my favourites, not for the quality of the opium, which was as bad as anywhere else in the city – one part opium to three parts God knew what – but because of the faintly Gothic aura the place exuded. Calcutta opium is best smoked ten feet below the corpses of half a dozen dead men.

I’d arrived sometime after midnight and the doorman had seemed surprised to see me. I didn’t blame him, though it wasn’t the shakes that unnerved him – he would have seen many a punter coming through the door with those symptoms. Rather it was the colour of my skin. Seeing an Englishman in Tangra wouldn’t have been all that remarkable a year ago, but a lot had happened in the last twelve months. These days, with the police force stretched thin outside of the meticulously manicured confines of White Town, sahibs were hard to find in Calcutta after dark. Fortunately, though, in this part of town economics still trumped issues of race and politics, and upon sight of the fan of rupee notes I clutched in my hand, I was admitted without fuss or fanfare and accompanied down to the cellar.

The first drag of the first pipe was a deliverance, like the breaking of a fever. With the second pipe, the shaking stopped, and with the third, the nerves steadied. I called for a fourth. If the first three had been a medicinal requisite, the next would be for pleasure, setting me on my way to what the Bengalis called nirbōn – nirvana. My head rested on a pillow of white porcelain as the velvet veil enveloped my senses. That’s when the trouble started.

From a thousand miles away came sounds: jagged and incomprehensible, growing louder and piercing the fog of my stupor. I screwed my eyelids shut against them, until a woman, one of the girls who rolled the O and prepared the pipes, was shaking me like a rag doll.

I opened my eyes and her heavily powdered face floated into focus.

‘You must go, sahib. Police raid!’

Her lips were painted blood red, and for some seconds the sight of them held my attention more than anything she might be saying. It was the sound of crashing furniture and porcelain smashing on a hard floor somewhere close by that finally began to break the spell. That and the hard slap across the face she gave me.

I shook my head as she slapped me again.

The words registered. I tried to stand on legs shaky like a newborn calf. Taking my arm, she pulled me towards a darkened passageway at the far side of the room, away from the oncoming commotion.

She stopped at the threshold and gestured with her free hand. ‘Go, sahib. Stairs at end. Up to back way.’

I turned to look at her. She was little more than a girl. ‘What’s your name?’ I asked.

I did as she ordered and staggered into the blackness, as behind me I heard her trying to rouse another punter from temporary oblivion. I groped blindly, feeling my way along walls slick with moisture, the stone floor slippery underfoot and the air fetid with the ammonia stench of stale urine. In the distance a blue light illuminated a narrow, sagging staircase. My head spinning, I made for it. Sounds echoed down the corridor: orders shouted in English. Then a woman’s scream.

I didn’t look back.

Instead I lurched on towards the stairs and looked up. The exit was barred by a hatch, a little light falling in thin shafts between it and the floorboards. Hauling myself up the steps, I reached the top, pushed the hatch and cursed as the thing refused to budge. I shivered as a wave of fear swept over me. Wiping the sweat from my eyes, I tried to focus on the hatch’s outline. There seemed no sign of a lock, at least no on this side. I took a breath and tried again, this time charging it with my shoulder. The hatch shifted a few inches, then fell back heavily. There was something on top of it. Something weighty. Behind me, the voices grew louder. Summoning what strength I had left, I charged the hatch one more time. It burst open, and suddenly I was flying through the air, momentum carrying me upward into a ruin of a room, its ceiling half gone and open to the moonlight. I landed hard on the floor, in a pool of something wet. Pulling myself up, I quickly shut the hatch and looked to weigh it down with whatever had been on top of it. Strangely there was nothing close by. Other than a body.

From SMOKE AND ASHES. Used with the permission of the publisher, Pegasus Books. Copyright © 2019 by Abir Mukherjee. 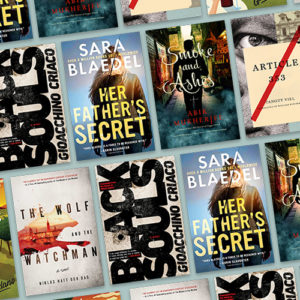 March's Best International Crime Fiction Every month, like customs agents with a penchant for literature, we’re scouring the latest imports to these shores looking...
© LitHub
Back to top