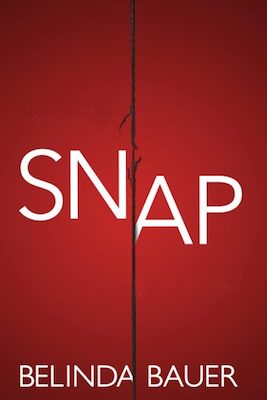 The following is an exclusive excerpt from Snap, the latest work from British psychological thrillist extroardinaire, Belinda Bauer. In the following passage, a woman wakes up in the middle of the night to find that there’s an intruder in her house, and receives a disturbing message.

Catherine While woke with a start and the feeling—the certainty—that somebody was in the house.

Adam wasn’t there. He was in Chesterfield. Catherine knew that because only yesterday he’d sent her a postcard of the bus station with an ironic doodle on it.

And yet she called out again.

Nothing. Just that creepy feeling that she was not alone. The streetlamp outside the window flickered and went out, leaving her momentarily blind.

‘Adam?’ she whispered into the blackness.

Catherine squeaked as the cat landed on her legs.

She sat up with a grunt and a series of awkward wiggles under the weight of her occupied belly, and shooed the cat off the bed.

Adam had had a second cat, called Fish, who had been squashed by a car before they’d met. Catherine had made a sympathetic face, of course, but secretly she had been relieved to hear it. One cat was more than enough to worry about sitting on the baby’s face. Chips was a fluffy white rag-doll, with fetching blue eyes, but Catherine wasn’t a cat person. That didn’t make her a dog person, mind—she’d never had a pet of any description, not even a goldfish – but in the two years she and Adam had been together, she’d learned enough to know she definitely wasn’t a cat person. He was. He was all over the cat, and the cat—and its hair—was all over him. Catherine was sure that cats had their place in the grand scheme of things – but she was equally sure that that place wasn’t shitting in a box in a corner of the kitchen.

Or jumping on her bed.

She must have left the bedroom door ajar last night, and Chips had seen his chance to reassert his right as a cat to lie on his minion’s pillow, and to piddle freely in his sock drawer.

Catherine hissed, and Chips stepped haughtily out of the room with a look over his shoulder that said, I’ll remember this.

‘Do your worst,’ said Catherine defiantly, and lay back on her pillow.

At least Chips had brought her back from her fright. Catherine clasped her hands over her stomach—amazed and amused by how far away it was from what she’d always thought of as her body. The first few months had been nothing really—a bit of a tum, of the sort that might quickly disappear after a few weeks on an exercise bike. Then the bulge had become big enough to celebrate by leaning back and sticking it out—like carrying a potted plant in from the garden. Now, seven months in, getting out of a chair felt more like hoisting a bag of compost on to a trolley at B&Q.

She couldn’t wait for the day when the baby was laid on her breast, red and screwed up and bawling . . .

I’ll never let anything hurt you!

The vehement promise was not something Catherine had ever formulated or decided. It came unbidden and at random times, straight from her heart, in the same way she imagined the baby would come from her womb—in a rush of emotion that brought tears to her eyes and steel to her spine.

She wiped her eyes on the heel of her hand and sighed and cursed Chips. She was going to need all the sleep she could get quite soon, and resented missing out on even a wink.

Dr Samuels had told her to create the utmost serenity for herself and her unborn child.

The doctor had actually used those words and Catherine had actually laughed at them. But the longer her pregnancy went on, the more she could see the value of utmost serenity, and she had started to meditate and light candles, and to read trashy novels in the bath. She had foot massages and kale smoothies and went to weekly antenatal classes, where she rolled around on her back like a stuck beetle while Adam helped her to breathe and to push and to giggle helplessly in supposed readiness for what was to come.

Catherine decided to read herself back to sleep. She had a tempting To Be Read pile, but her hormones kept drawing her compulsively to The Big Book of Baby Names. It was silly really; she and Adam both preferred traditional names, and the book was full of ridiculous ones. Plus, they’d sort of settled already on Alice for a girl and Frank for a boy, for her grandmother and his father. But while she knew she was never going to call her baby Bunker or Crimpelene, Catherine felt duty bound not to overlook even a remote possibility.

She turned to switch on the lamp, but stopped with her hand in mid air.

There was a noise.

She couldn’t identify quite what or where it was, but it sounded like somebody trying not to make a sound.

Article continues after advertisement
She couldn’t identify quite what or where it was, but it sounded like somebody trying not to make a sound.

Somebody in the house.

She was thirty-one and had lived alone all her adult life until she’d moved in with Adam nearly two years before. When you lived alone, and you heard a noise in the night, you didn’t cower under the bedclothes and wait for your fate to saunter up the stairs and down the hallway. When you lived alone, you got up and grabbed the torch, the bat, the hairspray, and you sneaked downstairs to confront . . .

Which was the only thing that had ever made a noise loud enough to wake her.

Catherine wasn’t as well prepared as she used to be—and was a lot more pregnant than she’d ever been. But there was nobody here but her. And so, with a muffled grunt, she swung her legs out of bed and rocked to her feet.

She crept on to the landing and picked up the vase from the bookshelf. It was chunky Swedish glass and she’d never liked it. Throwing it at an intruder would kill two birds with one stone.

She took a deep breath, then snapped on the landing light and yelled, ‘Whoever’s there had better get the hell out of this house! I’ve called the police and I’m armed!’

She started down the stairs, holding the vase at shoulder height, feeling both terrified and idiotic. At the bottom she stopped and listened again.

Had she been mistaken? It wouldn’t be the first time. Being alone in a house made every noise louder. Scarier. If she’d been sure, she’d have called the police, and she hadn’ t—even though the phone was right next to Adam’s side of the bed . . .

She adjusted the vase in her right hand, and moved cautiously from room to room. She gained courage with each doorway she passed through. The lounge and the dining room and the kitchen.

There was nobody there.

Catherine put the vase down on the kitchen table next to her camera and phone, and blew out her cheeks in relief – glad to be wrong.

Then she stared at her camera and phone. She didn’t remember leaving them on the table. Why would she? And Adam’s laptop was beside them, when it was always on the desk in the study—

Son of a bitch!

Catherine understood in a flash. The items were on the table next to the back door so that the burglar could pick them up on his way out!

Breathless with panic, she checked the door. It was unlocked! She had locked it, she was sure of that. The intruder must have left through it when she’d shouted—not even stopping to grab his loot!

Quickly she locked it again, and then pressed herself desperately against the cold glass—cupping her hands around her face to see into the night.

Then she sucked in her breath as a liquid black shape detached itself from the shadow of the house and flitted through the shrubbery and over the fence, like oil.

Her heart hammered but the words gave her strength.

And then it was over.

He was there and he was gone.

She was scared and she was safe.

It was over, and the patch of condensation her shout had left on the glass shrunk slowly away to nothing.

Catherine stepped back from the door. Her legs shook, and she sat down and put a trembling hand on her belly.

Her mind flitted through the events—darting back and forth between cause and consequence, and what was and what might have been, until it finally started to settle and function at a more normal rate.

Nothing bad had happened. Nothing had been taken.

Those were the most important things. The basics.

Catherine had almost forgotten what independence felt like, and she went back upstairs with a tiny grain of pride starting to swell in her chest.

She went into the bedroom and closed the door firmly behind her and let out an enormous sigh of relief. Then she turned to the bed and her stomach clenched so hard that the baby kicked back.

The bedside lamp was on.

It hadn’t been on. Her hand had stopped in mid air, remember? She knew she hadn’t turned it on.

And in the little pool of light, there was a knife.

Not a kitchen knife.

She looked down on the knife.

A bright blade—serrated on one edge, curved on the other to a cruel point; the handle inlaid with pearly clouds reflected in a petrol sea of . . .

The word surfaced from the deep ocean of her mind and felt right, even though she wasn’t sure what abalone was. The pale shell was so serene, so beautiful, that surely the blade could not be as brutal as it looked? As if from a great distance, Catherine watched her own hand reach out and touch a brief finger to the point. She gasped as electricity raced up her arm and neck to the top of her head. Tears sprang to her eyes and a tiny red ball swelled from the pad of her forefinger and sat there shining like a ruby in a Swiss watch.

She put her finger in her mouth with a shudder.

And noticed the birthday card.

Flowers in a bucket. To my Daughter on your Special Day. Her mother chose the worst cards. A week after her birthday Catherine had bundled it up with all her others and put them in a drawer in the spare room.

She felt disorientated, as if this were a dream, or a time warp.

She opened the card.

Her mother’s scratchy signature had been roughly crossed out and on the blank side was scrawled a new message . . .

I could have killed you.

SNAP © 2018 by Belinda Bauer. Reprinted with the permission of the publisher, Atlantic Monthly Press, an imprint of Grove Atlantic, Inc. All rights reserved. 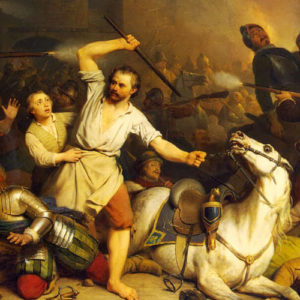 Revolutionary Crime Fiction In honor of the 4th of July, we decided to celebrate crime fiction set during all revolutions, even those that succeeded...
© LitHub
Back to top