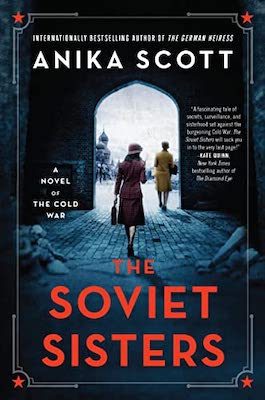 The following is an exclusive excerpt from The Soviet Sisters, by Anika Scott. In the following passage, the narrator remembers a telling moment from childhood, then reveals to her Berlin-based American lover that she has a sister in the KGB. Scott, who has previously worked as a journalist and written several historical novels, lives in Essen, Germany with her family.

“I think it’s time for me to tell you about my sister.”

I didn’t know where to begin and surprised myself by starting on the day when Vera was eleven and went missing. Everyone in our apartment house on Arbat Street in Moscow looked for her, in every flat on every floor, in the yard, in the alley, in the square. I was six and wasn’t supposed to help; our mother took me to bed, tears in her eyes behind her thick glasses. My brother, Yuri, was eight, and as we lay together in our bed listening to our neighbors call “Vera! Vera!” he patted my hair and told me not to worry. If somebody tried to snatch Vera away, she’d kick and bite them, and they’d regret picking on her.

I wasn’t so sure; Vera was a big girl to me but I knew she was a small girl to the rest of the world, with serious brown eyes and thick hair the color of honey that she wore in two long braids. She was the cleverest girl in her school, and I was proud that she taught me calligraphy and numbers and other things the big children knew. She was always patient and kind when I was listening and applying myself to her lessons. When I made a stupid mistake, or babbled about something other than the lesson, she was severe. She never hit or pinched me—that was Yuri’s way when I annoyed him—she would just . . . shut me out. Pretend I didn’t exist. She could do it for days, floating around me in our little apartment as if I were a ghost, not speaking to me, not looking at me. She kept it up until I cried and begged her to stop. Then she would hug and kiss me, and I knew her punishing me hurt her almost as much as it hurt me.

And so, when she went missing, I lay in bed sure that I was the reason she’d run away. I’d done something wrong, though I didn’t know what, and she’d run away and maybe she’d fallen into the river or gotten hit by a bus, and it was my fault. I had to help her. I told Yuri I had to go to the toilet, slid out of bed, and joined the search.

Most of the adults were outside the building now, and I took it upon myself to slink into the neighboring flats, which wasn’t hard since all doors were generally open and we children ran in and out of one another’s homes all the time. “Vera,” I called in the rooms upstairs. “Vera, come out.” I tried to think of it as a game of hide-and-seek. Where would she hide?

I looked in places the adults hadn’t, behind doors, under the washing, in the small spaces under the stairs. I dared to do what I was normally not allowed, opening other people’s closets and cupboards. In the flat of the downstairs neighbors, in a wooden cupboard, I found her—Vera, in her Young Pioneers uniform, hunched into a small circle like a snail. I gasped, and she shushed me. “Is anybody around, Masha?” she asked. “Check the hallways.” I did, and returned shaking my head. She unfolded herself from the cupboard, grasped my hand, and crept with me to the door. I imitated her careful footsteps, and when she began dashing up the stairway to our flat, I stumbled to keep up. We flew into the bedroom and leapt onto the bed. Yuri looked unimpressed.

“I knew you weren’t really missing,” he said.

“What were you doing in the neighbor’s cupboard?” I asked, relieved, but also confused.

“Being vigilant.” Vera unknotted the scarlet scarf around her neck, the symbol of the Pioneers, and carefully folded it. Ever since she’d joined the communist youth league, she’d hinted at the important work she did for the party and the Motherland. It all seemed mysterious and exciting to me. But what did it have to do with Vera disappearing for a whole day? “You learn a lot about people,” Vera said thoughtfully, “when you hide in their cupboards.”

When Mama came in and found her with me and Yuri, Vera said, “You didn’t have to worry about me, Mamochka. I was just up the street playing at Svetlana’s.”

Over the years, I’d caught her lying again and again, about where she’d been or who she was with. I grew wary of her, and ashamed of myself for feeling that way about my own sister. Vera, the oldest and best of us children, the child we all thought Papa would’ve loved the most for becoming exactly what we thought he wanted. She was the first of us to go to university, the first to go to war. By then, I loved her as I always had, but it was a careful love, full of caution.

“Vera led the way,” I said to Henry, “in all things. School and the war and . . . She’s the strong one. The clever one. Brave. She always knows best. Even if she isn’t easy to live with. Or understand.”

“Marya,” Henry said in such an odd tone, I blinked and realized I was here, in Berlin, speaking to him. I held his hand on the tabletop.

“If you squeeze my hand any tighter, they’ll have to amputate it.”

I let go of him and said in a rush, “Vera is in the MGB, an officer of state security. I’m not sure what she does exactly. Investigations. Counterintelligence . . .” I stopped.

The silence lasted long enough for the clock on the sill to click over louder than usual, sign of the minute hand on the twelve, a new hour. Henry said, “Say that again?”

“All this time, you’ve been scared of the secret police finding out about us, and your own sister is one of them?”

“I should’ve told you earlier. But she doesn’t know about us. I haven’t seen her since the war. She’s not even in Berlin.”

He shook his head and looked at the portrait of his daughter. It was easier for him to look at her than me. I didn’t know what his people would do to him if they knew he was not only seeing a Russian in secret but a Russian whose sister was an officer of Soviet state security. I imagined the worst, Henry arrested by his own people and taken in for questioning. They would assume I had ensnared him for my own and my country’s ends. He wouldn’t be trusted to work for the military government anymore and would lose his rank and his job. He might be court-martialed, sent back to England in disgrace.

“I understand if you’re angry. Henry? Henry, are you going to throw me out?”

He wrapped his hands around his teacup and raised it to his lips. He still wouldn’t look at me.

I went into the living room for my purse and shoes, everything awash in the thin wall of tears I could not, would not, let fall from my eyes. Because of Vera, this affair—casual or not—was over. I should’ve never said anything about her. She wasn’t an immediate danger to us. Why did I have to tell him?

I thought about the things of mine I should take with me, things he wouldn’t want to see anymore, my hairbrush, my negligée, the soaps and perfumes he’d bought and kept for me here. I didn’t have the heart to pack any of it. He could throw them out himself if he wanted. What did people say at the end of a casual affair? It was fun while it lasted? So long? 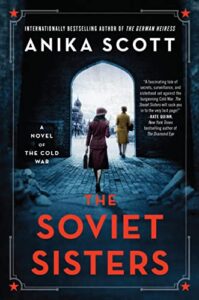 Bad Seeds and Mad Scientists: On the Build-A-Humans of 19th-Century Literature 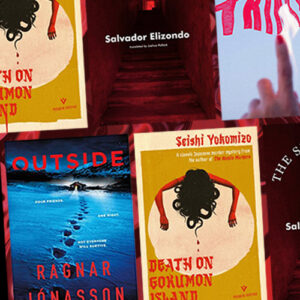 The Best International Crime Fiction Out This June and July I know, I know, this is a monthly column, but sometimes your whole team gets Covid and you get a little behind on monthly...
© LitHub
Back to top