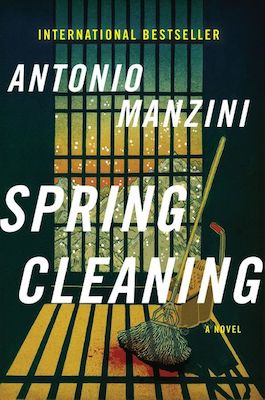 The following is an exclusive excerpt from Spring Cleaning, Antonio Manzini’s newest installment in the Rocco Schiavone mystery series. Hiding out in a hotel in northwestern Italy after his best friend’s girlfriend was killed, the Deputy Police Chief, who believes he was the intended target, searches the deep forests for the murderer. But Rocco’s grudge-bearing adversaries in the mafia still haunt Alpine Italy.

Sprawled in his bed, Rocco was looking at the facing wall. He had fixated on a stain in the uppermost corner. A gray patch. It looked like Great Britain. Or the silhouette of a bearded man laughing. Lupa’s tail swished through the air. The dog pricked up her ears and raised her muzzle. Three seconds later someone knocked at the door.

It was the voice of the doorman in the residential hotel.

“Dottore, there’s a visitor to see you. Could you please open the door? Answer me!”

He had to answer now. He got up and dragged himself over to the door. He turned the key and opened it.

The doorman was accompanied by an enormous man. Rocco recognized him: the deputy chief of the Turin mobile squad, Carlo Pietra, deployed to Aosta since Rocco had shut himself up in that residential hotel room.

The deputy chief threw the door open wide. “Come on in . . .” he said. Pietra barely cracked a smile, stepped past the concierge, and walked into the room.

“Do you need anything?”

Schiavone said nothing. He limited himself to shutting the door.

Carlo Pietra was like a human sphere who seemed to fill up the 325 square feet of the room all by himself. He had cheerful, light-blue eyes; he wore a sparse beard and long hair. “May I?” he asked Rocco, pointing to the only armchair in the one-room studio.

“Why of course, make yourself comfortable.”

He sat down, making the armchair creak. He looked at the deputy chief, his growth of whiskers from the last several days, his unkempt hair. Then he opened the binder that he had been holding on his knees and stuck his face into it. “Certainly, it’s depressing in here,” he observed as he leafed through the various documents.

“It’s not as if things are that much nicer at my old place.” Rocco opened the little fridge. “Want anything to drink? Let’s see . . . I’ve got a Coke, some fruit juices, and three mini bottles of some brand of whiskey I’ve never heard of.”

Carlo Pietra was like a human sphere who seemed to fill up the 325 square feet of the room all by himself.

“Otherwise, I can make you a cup of coffee with a filter pack. It’s better than you’d think.”

“No, no, nothing for me. I’m going out to dinner at a trattoria and I want to have plenty of room.” And he smacked himself three times on his ample belly.

Rocco went over to the galley kitchen in the corner. Actually, he felt like a coffee. “Well then, Dottor Pietra, tell me everything.”

Pietra pulled out a handkerchief and blew his nose. “Listen, let’s do one thing before we start getting tangled up with formalities?”

“Can we use the informal? Be on a first-name basis?”

“That would be better.” The deputy chief pressed a button, and the espresso immediately began tumbling out of the coffee maker and into the porcelain demitasse cup.

“So, in that case, Rocco, do you feel like going over the situation quickly?”

“Let’s go.” Rocco picked up the espresso and went back to sit on the bed. Lupa had fallen asleep again.

“First of all, do you have any idea of who might have entered your apartment on Thursday, May 10, and shot . . .” Pietra hesitated as he leafed through the pages in the binder.

“Adele Talamonti,” said Rocco. “That’s right. Adele Talamonti was at my home. She was the girlfriend of a close friend of mine, Sebastiano. She’d come up here to lie low, a maneuver that was meant to force Sebastiano to lose his mind trying to find her. Yes, I know . . .” Rocco said, anticipating Pietra’s skeptical glance, “complete bullshit, but what she was hoping to do was rekindle her boyfriend’s passion and interest. Anyway, the killer assumed that the shape in that bed was me, and he shot her.”

Pietra nodded. “So that means you don’t have the foggiest idea who it could have been?”

Carlo scratched his head. “Listen, Rocco, I’ve read a few things about you. And let’s just say that . . . at first glance, I’d say that you have a pretty messed-up past.”

“Which means that, even if it’s no easy matter to go dig into it, you must have some suspicions.”

Rocco shook his head. “No. I really don’t. All I know is that whoever tried to kill me is bound to try again.”

Carlo Pietra looked around the room. “And you’re waiting for them here?”

“No. I’m here because I don’t have a place to live anymore. As soon as I find a new place, I’ll move. Especially for her”—and he pointed at Lupa. “She’s a little cramped in here.”

Pietra seemed to notice the dog for the first time. “I don’t know about that. I prefer cats.” The deputy chief of the mobile squad hoisted his oversized body off the chair. “All right, then, I’m going to call on the police chief. I’ll hand over all the documentation I have, and then I’m heading back to Turin. There’s nothing else for me to do here. When are you returning to active duty?”

“I still have some vacation time to use up.”

“And you’re going to use it up here?”

“It’s been a pleasure.” Pietra extended his hand and shook Rocco’s. “How do you like being in Aosta?”

The deputy chief thought it over for a few seconds. “Have a safe trip.”

It was Massimo, his friend from Viterbo, who had given him a recommendation of the best dog food for Lupa. You could rely on Massimo. He bred Lagotto Romagnolo dogs for truffle hunting and he trained them like soldiers. So Rocco had taken a picture of his puppy and texted it to his friend. Massimo replied: “My good friend Rocco, it’s hard to tell the breed. At a glance, I see three: setter, Brittany, and a shepherd of some kind. Anyway, she’s a beauty, hold on to her.” He picked up the dog food bowl, all the food eaten now, and placed it in the sink of the galley kitchen. Then he picked the newspaper up off the floor to crumple it up and throw it away. His eye landed on the article by Buccellato:

We wonder, however: Is this an investigation that

warrants a wall of secrecy to keep from tipping off

the culprits, or is it more of a delaying action being

run by law enforcement now that one of their members

is at the eye of the hurricane?

He crushed the newsprint into a ball and hurled it into the trash can. 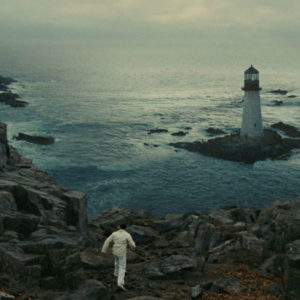 Islands: The Ultimate Crime Fiction Setting My island is a large one, relatively speaking. Ireland by name (population just under five million) but size is not a criterion...
© LitHub
Back to top