Stephen Chbosky on the Essence of Horror

Pretty sure there’s no need to introduce Stephen Chbosky, the author behind one of the most pivotal novels in years, The Perks of Being a Wallflower. Since the publication of his debut, he has gone on to direct the film adaptation of Perks as well as R.J. Palacio’s Wonder. Both films are must-sees, and you could say Chbosky’s second novel, Imaginary Friend, is the sort of book that you must experience to truly understand its power. It’s every bit a page-turner as it is an experience that’ll keep you up at night. But there’s more than that—it’s about Christopher, a young boy who discovers something sinister in the woods. But it’s not just about ghosts and imagination and friendship and small-town gossip; it’s about growing up and the love of a parent for their child. It’s about Chbosky’s uncanny ability to deliver compassion into every sentence.

I spoke to Chbosky about his horror influences, scariest moments in film, fiction, life, and even dared to ask him about his own imaginary friends.

Michael Seidlinger: The world is a strange and frightening place, and now more than ever it feels like horror is a perfect container where we can examine the impossibility of the world. So I gotta ask, what drove you to horror?

Stephen Chbosky: I have always loved the horror genre. My favorite writer of all time is Stephen King. Growing up in Pittsburgh, my biggest filmmaking hero was George A. Romero. So, for me, horror was not a departure from my work. It was returning to a first love.

It has been a while since Perks of Being a Wallflower. The industry tends to favor the conveyor belt method of pumping out a book every other year, sometimes every year, when the writer’s work happens to sell well; do you feel like Imaginary Friend needed that time in order to find and develop its uniqueness, much like how a kid needs time to grow up? For the sake of the inquiry, if Imaginary Friend came out a year and a half after Perks, do you think the industry and media would project the book in a different light?

I think that Imaginary Friend needed the time to develop because I needed the time to develop. You see, with the exception of writing my first novel, all of my professional experience was in movies and television. It was actually making the Perks movie that made me want to write another book. So, to me, this is the perfect time to publish another novel because I love Imaginary Friend as much as I love Perks. I don’t know if having two books 20 years apart is good “marketing.” But it makes for good writing.

Reading Imaginary Friend makes me nostalgic—pop quizzes, sleepovers, ghost stories, the fear of being grounded—as a child our worldview is smaller and capable of harboring a whole different set of terrors. A child’s imagination runs wild. What are some of those priceless nostalgic things that still crawl to you when you allow time to reflect back? What crept into Imaginary Friend (no spoilers! Okay maybe a few)?

Every age has its own set of fears. When I was a child, nothing scared me more than the witch in Hansel & Gretel. So, she became part of the character (mini spoiler) the hissing lady. When I was older, I was afraid of failing tests. So, that became Christopher’s nightmare in school. I grew up in Western, PA, where the woods felt haunted. The deer were everywhere. And the clouds in the sky, which may (or may not) be watching us. This book is filled with everything that ever scared me (and everything that ever gave me hope).

Has there been a book that scared you so effectively it rendered you speechless? What about a movie? Scariest real-life experience?

Stephen King has written so many incredible books, it is impossible to narrow it down to one. I think The Stand is his greatest novel. The Shining is his scariest (to me at least).

And movies? Get ready! Halloween, Psycho, The Shining, The Exorcist, The Sixth Sense (when the little girl crashes through that tent!), and the ending of The Silence of the Lambs. I could watch any one of them again right now. Actually, I think I will. Thanks!

Real life? When my daughter was 1 and a half, my wife and I rented a small house in Millburn, NJ. The minute we walked in, I felt afraid. Then, when I saw my little girl turn to an empty corner, wag her finger, and say “No” as if someone was standing there? Well, let’s just say we stayed at the Best Western that night and found new accommodations in the morning. Fun fact: the next time we drove past that site a couple months later, the house was demolished and construction on a new one began. I guess the guy was having trouble renting it out. True story.

Any writing rituals? It’s a question I always gotta ask because sometimes it’s just so … scary to sit down and stare at the blank page.

I get a large cup of a caffeinated beverage, put on a movie soundtrack, and write. If you’re scared of a blank page, go find some old notes, and start there. OR … even better … base your writing process on time spent rather than pages written. If you set your phone clock for an hour, two, three, ten, and you work that long … you win.

Did your experience writing screenplays, directing Perks and Wonder, affect your process?

Yes. With the exception of Perks, all of my professional experience was in movies and television. So, when I write, that’s built into the process. When I direct, I am using everything at my disposal to give the audience a thrill or an emotional response. Images, sound, music, editing, performance. What was most interesting writing Imaginary Friend was using that instinct with nothing but words at my disposal. And a great many moments (like the end of part I when I put only one word on each page) came from trying to blend the worlds together.

We all had imaginary friends. Who was yours? Did you have more than one?

Imaginary Friend really feels like an extension to Perks of Being a Wallflower, as if they’re in the same universe—as though Christopher could live in the same neighborhood. What would Christopher write to Charlie, if it were Charlie that was his “Dear Friend?”

They do live in the same neighborhood. Their streets actually cross each other. And Christopher would tell Charlie to be aware of the Mission Street Woods.

Would you ever tackle a crime novel? I would love to see the masterful characterization and heart that you bring to your narratives dive into the morally ambiguous terrain of crime, noir, etc.

Yes.  I have two really good crime ideas—one about a killer, one about a vigilante. And while I can’t tell you when I will write them, I can promise you it won’t be another 20 years until I write my next novel. 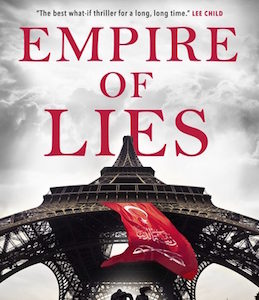 “History is nothing but the lies that are no longer disputed.” —Napoleon Bonaparte   Topkapi Palace, Istanbul...
© LitHub
Back to top