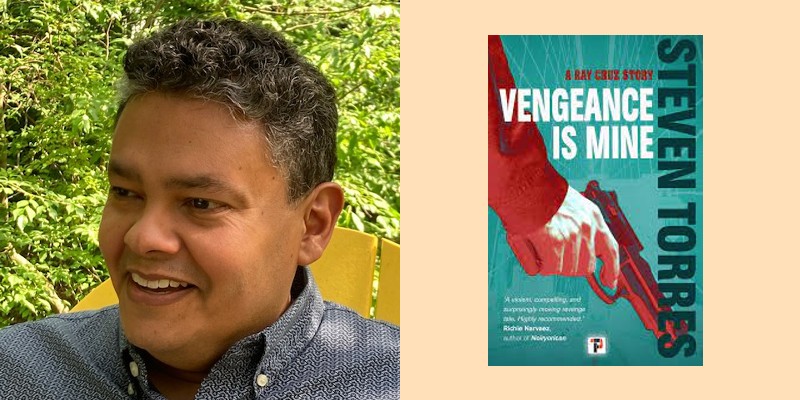 Steven Torres on Getting Rid of the Labels and Just Writing About Humans (and Inevitably, Violence)

The Bronx-born author returns with a tale of revenge

Steven Torres arrived on the crime fiction scene in 2002 with Precinct Puerto Rico, first in a series of five books (and several short stories) featuring Sheriff Luis Gonzalo. Kirkus Reviews called Torres’s debut a “top-notch police procedural whose engrossing details create an authentic feel.” In 2007, he won a Derringer Award for his short story “Elena Speaks of the City, Under Siege,” and, while his first books were published traditionally, he decided to self-publish several others, including two story collections and the thriller Lucy Cruz and the Chupacabra Killings. This month, he launches a new series with a new publisher, the pulpy revenge tale Vengeance Is Mine (Flame Tree Press).

RN: I’ve read that you grew up in an apartment above a library where your father worked, at the Tremont Branch on Washington Avenue, and that you used to go downstairs at night and have your pick of books. That sounds cool and scary. What kinds of books did you read as a child?

ST: When I was living in the library—a giant Carnegie building, very cool though the neighborhood wasn’t so great back then—I read history and biographies. There was a series called “Childhood of Famous Americans,” and I read as many as I could find. In the fourth grade, the school librarian told me I’d finished all the biographies but that there were whole sections waiting for me. I read the Three Musketeers trilogy, and the death of Porthos sealed my fate as a reader.

RN: You also you spent a year and a half living in PR. How was that for a city boy?

ST: The rural part was wonderful for me as an 11 to 12 year old. Learned how to ride a bike, picked coffee, ran barefoot, the whole deal. Buuuuuut, my parents had never taught me and my sisters more than a few words of Spanish, so being put in a corner and given Heckle and Jeckle comic books to learn Spanish was galling.

RN: What eventually drew you to write crime fiction?

ST: My mom loved her TV detectives—Barnaby Jones, Columbo, The Streets of San Francisco, among others. I grew up watching these. Still, when I was about 18 I started writing, and it wasn’t crime. I was trying for “literary,” whatever that means. In practice, I wrote in the style of Hawthorne with characters who used words like “indubitably.” I collected rejections, well earned.

Then in grad school, I got really motivated. I was doing the Ph.D. and approaching the time for job searching and was told I needed publications. In my mind, publishing short stories and novels would make up for a deficit of scholarly essays that I can barely stand to read and certainly can’t write. I sent out a “literary” short story, and it was accepted. I also decided on a mystery story of about 55,000 to 60,000 words. I liked the structure that presented itself in mysteries—there’s a crime, there’s discovery of the crime, there’s the cop’s arrival, collection of clues, et cetera. I had read a few Bill Pronzini novels, a few Sue Graftons, and a few James Lee Burkes, among others—Gabriel García Márquez especially—then set out to “go and do likewise.”

RN: You’re a professor now at Manchester Community College. You have a family, a garden, music to listen to. Why torture yourself as a writer?

ST: Of course, I do it for the money. Also, the glory. In truth, I’d like to say that it’s to represent voices of people who often don’t have a voice—the Puerto Rican people, the people I grew up around in the Bronx and in Puerto Rico. I would love to get to a point where these voices are heard with regularity, and I think things are getting there. Your good self and a bunch of others are standing in that gap, leading a charge I haven’t seen before.

On the other hand, I grew up in an extended family of self-described charlatanes—jokers? storytellers? Dinner at my grandma’s house in Mayagüez was often a competition about who told the best story about how their day went. I’m cut from that same cloth. I tell stories daily.

RN: Your first books, the Precinct Puerto Rico series, are about the low key but tenacious Sheriff Gonzalo, who always struck me as a Caribbean Maigret, living in the fictional town of Angustias. What inspired that character and those books?

ST: The first bit of inspiration came from a movie called The Milagro Beanfield War. The sheriff there was played by Rubén Blades. When I cast about for a fiction idea years later, I thought why not a Puerto Rican sheriff in a Puerto Rican setting? Rural PR, not San Juan—which to me would mean writing Crockett and Tubbs types of stories. And I wanted a sheriff who was normal. I wanted to answer the question: “What would happen if the sheriff wasn’t brooding over what happened to him in Nam? Didn’t drink in excess. Didn’t have a wife who was leaving him. Wasn’t quirky like Columbo or Monk? Didn’t turn in his badge and gun to ‘Get to the Truth!’?”

RN: Virtual high five for working Crockett and Tubbs into a conversation. You’ve self-published a few times, with the Killing Ways collections and Lucy Cruz and the Chupacabra Killing. Why did you choose to go that route?

ST: Different reasons. The short stories got put up because I knew they weren’t likely to make me any more money, and I didn’t want them to just disappear as so many short stories seem to do.

The Lucy Cruz novel is, I think, my best full-length story so far. But, when my agent tried to sell it, my being a male writing a female main character came up several times as a problem, so, since I was unwilling to change my gender or Lucy’s, I put it out as a Kindle.

RN: In your new book, Vengeance Is Mine, Ray Cruz, a former enforcer, seeks revenge when his daughter is nearly beaten to death. It’s darker and much more violent than the Gonzalo books. Why the change of direction?

ST: When I was a kid, I once stayed up to watch The David Susskind Show because there was a gang leader from my neighborhood—they had even tagged the building I lived in. He talked about murders he had ordered, beatings, shootouts, and even rapes that were intended to send messages. This was my neighborhood, a neighborhood so violent Paul Newman went there to film parts of Fort Apache, The Bronx even though “Fort Apache” was a different neighborhood. The Bronx is very different now, but if I’m writing about it, there’s probably going to be violence.

I think most people are interested in these things. Even pacifists want revenge sometimes. Wasn’t it Gandhi who told some guy who was tweaking his nose, “Do that again, pa’ que vea”?

RN: Both Vengeance Is Mine and The Concrete Maze feature fathers protecting their daughters. What is about that theme that fascinates you?

ST: Maybe it’s the fact that I have a daughter and feel protective—though she’s a black belt. Maybe it is that Poe essay about how love is the best theme for a story and especially love lost and especially the lost love being young and beautiful, et cetera, all to create a single effect in the reader.

Also, maybe, just maybe, the second book in the new series will showcase women in a protective role, since Ray Cruz will be in a bad spot and his sisters want to be helpful. I’ll leave it at that.

RN: Whether or not we want it, you and I fall under the label of “Latinx writers” and “Puerto Rican writers”? What do these terms mean to you?

ST: Well, it’s a tough question. I remain aware that no matter what I say or want, others will label me. You know how many times I’ve been asked “Where are you from?” by people who won’t accept “I was born in New York City”? “No, but where are you really from?” “Puerto Rico.” “Yes, I thought so.”

I’m struggling toward the day when I can say, “I’m just human, and my writing is about human things. The names happen to be Cruz and Cordero, not Smith or Brinkley, but it’s still human.”

There will come a time when the label will just be a point of pride, not a limitation on what you can write or read.

RN: You and I were on a panel once, and you told the story of a pitch meeting, but the publisher or agent said it might be a good idea to change the ethnicity. Can you tell that story again?

ST: It was a rom-com script I was trying to pitch, and I was asked at the end if the story could take place in Oklahoma instead of Puerto Rico. I thought for a few beats, trying to remember if there was a large Puerto Rican population in Oklahoma, then it dawned on me and I asked: “Are you asking if the main characters can be white?” They said, “Yes.” I said something like, “I suppose so,” but I left unsaid that I didn’t see what the harm was of it being set on the island.

I’ve been told more than once that “I can’t read your book because I read for entertainment, not to get a lesson on a foreign/different culture.” I guess I’d like to see a time when people don’t think about reading books from “other cultures” as a chore. To paraphrase, judge us by the “content of our characters” (and of our plots and our use of similes), not the color of our skin (or the texture of our hair, et cetera). I don’t think it’s an overnight thing. I think it’s something to fight for by writing our best books and stories, by lifting each other up, by joining together in professional groups. 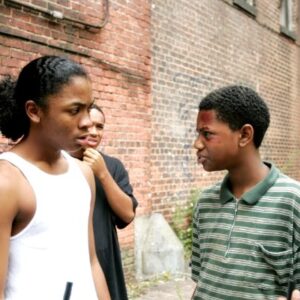 From the first season of The Wire, I had a love/hate relationship with the HBO series some critics and fans anointed “the...
© LitHub
Back to top