On the Power of Women to Observe Each Other

In the penultimate episode of Killing Eve’s riveting first season, a Russian double-agent known as Konstantin (Kim Bodnia) comes home to find a highly trained assassin waiting to kill him. Ironically, he was the one to train Villanelle (Jodie Comer). As they sit across from each other, her gun pointed at him, he waxes poetic about what makes his protégé so special. “You are more powerful than any other person because of what you have in here,” he tells her, gesturing to his heart. Though Villanelle keeps her weapon trained on him, her eyes shine with tears as she listens. He continues: “You’re so different. You have something strong. You should be proud.” Despite his attempt to appeal to their paternal bond, she orders Konstantin to take more of pills—her way of granting her former handler a dignified death. Moments later, he chucks a whiskey glass at her face, hits her upside the head with a nearby log, and successfully finagles his escape. Turns out his sentimental monologue was just a ploy to distract Villanelle, so she would let her guard down. Nevertheless, his words transfix his audience because of how true they ring. Villanelle is different from any kind of assassin we’ve seen before, and not only because she’s a woman.

The series, based on the novellas by Luke Jennings, centers around a cat-and-mouse game between Villanelle and MI5 agent Eve Polastri (Sandra Oh). Crime dramas led by capable female investigators recently saw an uptick in popularity with shows like The Fall and Top of the Lake. We’ve also seen plenty of women playing killers, usually painted as femme fatales, in the past. Yet, having two women anchor a spy thriller offers an entirely new kind of dynamic. “They give each other life in a way that’s more complex than a romantic relationship,” series creator and showrunner Phoebe Waller-Bridge explained in an interview with The New York Times. “It’s sexual, it’s intellectual, it’s aspirational.” It’s also refreshingly free from the male gaze.

That’s not to say that Villanelle isn’t a fantasy of sorts. For starters, she can pull off murdering someone by weaponizing a hairpin and while wearing a diaphanous, periwinkle Burberry dress with white lace trim.

That’s not to say that Villanelle isn’t a fantasy of sorts. For starters, she can pull off murdering someone by weaponizing a hairpin and while wearing a diaphanous, periwinkle Burberry dress with white lace trim. Indeed, it’s her style that catches Eve’s attention in the first place. Her colleagues initially assume they’re looking for a male suspect in the death of a Russian politician, but Eve suggests that only a woman could have gotten close enough to slice the victim’s femoral artery without him noticing. Indeed, to get to her many victims, Villanelle disguises herself in a variety of stereotypically feminine roles—such as a nurse, waitress, or sex worker—which allow her to appear less threatening to her targets. Gender bias also helps explain why she’s able to operate under the radar for so long. All of Eve’s male superiors fail to connect the dots between a spate of killings across Europe. Only women, M16 officer Carolyn Martens (Fiona Shaw) and Eve herself, correctly identify the handiwork as belonging to an individual female assassin.

Eve admiringly describes Villanelle’s ability to outsmart even the best among the intelligence community, even going so far as to describe herself as “a fan.” Through Eve’s eyes, Villanelle transforms from an object of male desire to a female one. On the surface, she personifies qualities of traditional femininity: beauty, glamour, sex appeal. She covets designer clothing and perfume. Other times, she comes off as childlike, eager for Konstantin’s approval and delighting in practical jokes. But Villanelle equally subverts gender expectations by demonstrating that she’s as physically dominant and in control as any man—if not more so. Likewise, her sexual fluidity flaunts the burdensome heteronormativity prescribed by a patriarchal society. It is precisely this mobility, this freedom to move between different feminine models, that Eve appears to envy.

Within the genre, Villanelle represents an alternative to the femme fatale archetype. Though her sexuality remains an integral part of her character, she is not defined by it. Nor do the writers attempt to rationalize her behavior with any past trauma or sexual assault. The series altogether avoids relying on the misogynistic trope of using rape to “empower” a female character or fuel a revenge narrative. Instead of an encounter with a man serving as the catalyst, Villanelle’s liaison with an older woman inspires her first act of homicide, which includes the symbolically loaded castration of her lover’s husband.

If Villanelle embodies a woman’s fantasy to be fully in possession of herself, then Eve’s character grounds us in reality.

If Villanelle embodies a woman’s fantasy to be fully in possession of herself, then Eve’s character grounds us in reality. Despite the appearances of having a fulfilling job and loving marriage, her restless spirit betrays a resistance to the institutions and systems she must work under, as exemplified by the bureaucratic trappings of her job or the monotony of monogamy. At one point, she jokes with her husband about a hypothetical yet methodically thought-out plan to do away with him. She would never actually go through with this, but someone completely uninhibited like Villanelle could. In this way, the female assassin represents what Eve cannot do and the life she doesn’t have.

On the other hand, Eve reminds us not infrequently, in case we risk becoming too enamored with the fantasy, that Villanelle is a psychopath. She likely commits horrific acts of violence for violence’s sake. She does not seem to care why her employer, a mysterious organization known as The Twelve, contracts her to do their bidding. “I want to do my job really well,” she simply says, reflecting her task-oriented sensibilities. Her indifference to the bigger picture and absence of real purpose may be her greatest foibles. Whereas Eve never seems to lose sight of what’s at stake in her mission to stop Villanelle from hurting more people, even at significant cost to her own career and marriage. It is precisely this dichotomy—the way these two characters play off each other’s conflicting desires and principles—that makes the show so compelling to watch.

When Eve and Villanelle come face-to-face in the finale, they openly admit to their mutual feelings for each other. “I think about you all the time,” Eve confesses. She leaves it ambiguous as to whether the other woman represents anything beyond a psychological obsession. Meanwhile, Villanelle expresses an explicitly sexual attraction to her pursuer. Although the season-ending cliffhanger deprives us of a conclusive reckoning (or consummation) of their relationship, what continues to drive the story is how the two women see each other. In this way, Killing Eve truly liberates itself from the male gaze.

Mimi Wong is a writer covering art, culture, and literature. Her work has appeared in Electric Literature, Hyperallergic, and ArtAsiaPacific, where she is a New York desk editor. She also serves as the Executive Editor of The Offing.
http://www.mimi-wong.com

Something in the Water 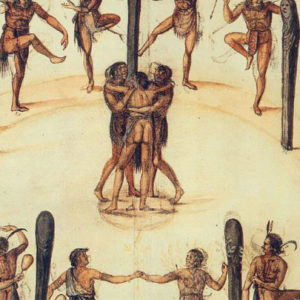 The print room at the British Museum is well hidden from the thousands who mill through the endless maze of exhibit...
© LitHub
Back to top