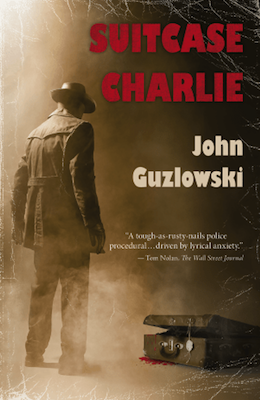 The following is an exclusive excerpt from Suitcase Charlie, a novel of crime in 1950s Chicago, by John Guzlowski. In the following passage, two detectives interview a nun about suspicious goings on after finding a corpse in a suitcase. The wisecracking detectives conjure the height of hard-boiled crime writing in this evocative roman noir.

Like the beat cops and the other suit-coat dicks, they started talking to people, canvassing. The Lieutenant told them to cover the north side of the block between the corner where the suitcase was found and Humboldt Park.

Hank knew the block. Tree-lined with poplars and maples, and a dozen or so buildings, mostly single-family homes with a handful of apartment houses thrown in. There was a Catholic nun’s convent at the near end of the street and a synagogue at the far end, butting up against California Avenue and the park on its west side.

The two detectives started at the convent. It was the nearest place, a three-story, double-lot red brick apartment building converted decades ago when the Sisters of St. Joseph first came to St. Fidelis Parish back in the 1920s.

Standing at the front door, Hank was about to ring the doorbell when Marvin asked, “You feeling okay?”

“You didn’t look okay when you were puking.”

“I guess you’re right. You’re not puking. But if you decide to, let me know in advance so I can get out of your way.”

“For a little man, Marvin, you sure aren’t funny.”

“Much obliged and the same to you,” Marvin said and smiled.

He’d been a cop for almost ten years, and a front-line infantryman before that for more than a year during World War II, and here he was puking like a grammar-school boy.

Hank rang the doorbell. He knew what Marvin and the other guys were thinking: He was a wimp, a weak sister. They’d be talking about his vomiting for weeks, months. He’d been a cop for almost ten years, and a front-line infantryman before that for more than a year during World War II, and here he was puking like a grammar-school boy. He shook his head and looked through the door’s window.

He could see the lights were on in two of the rooms on the first floor. He was sure the nuns were up. A hundred cops coming and going, crowds on three of the four corners, a dead kid in a suitcase on the fourth one—it was enough to keep you awake for a long time. Not to mention the heat that still pressed down on the neighborhood like a burning thumb.

Hank waited for a minute and then pressed the bell again. Looking up at the first-floor windows, he couldn’t see anybody moving around. The glass was covered with thick window shades and thicker dark blue curtains behind them. Hank wasn’t surprised. The nuns were women who spent their days in long black habits, the kind of clothes that hid everything but their faces and hands. Everything else about them was a secret, reserved strictly for their bridegroom Jesus. Nuns weren’t the kind who would be living with a view of the street, and they certainly weren’t the kind who would be giving you a free peek of what was going on in their lives. The only thing Hank could see through the glass panes on the door was the stairs on the other side of the door, and he had to press his face against the glass to see that.

Marvin turned to Hank. “Say, you ever interview a nun?”

Hank nodded. “Yeah, last December, about a burglary at Our Lady of Angels. Tough broads. Eyes like razors.”

“Sure, it’s the loneliness that makes them mean. They need a man to kick around. It’d work off their edge.”

Hank wondered about his partner. He was always ready with a wisecrack no matter what the situation. Where’d that come from? The way he was brought up? The father who slapped him up and down the block? Hank didn’t know. He looked again to see if one of the nuns was going to answer the door.

He was about to ring a third time when Marvin said, “Hey, Hank, here, look, she’s coming down the stairs. You better be a good boy, or she’ll rap your knuckles and twist your ear.”

Hank ignored him and waited for the door to open.

Through the glass, he could see the hem of a black tunic brushing the stairs as the Sister made her way down. Then he could see her hands and face. She was short and plump, and older, maybe fifty, maybe sixty. It was hard to tell with nuns, but what he could tell was that there was no rush in her. She had plenty of time. She took the steps slowly, carefully. He wondered if maybe the nuns didn’t know about the dead boy.

Hank expected her to open the door when she got to the bottom of the stairs, but she didn’t. Instead, she flicked on a light above the door and looked at him and Marvin.

Without any expression on her face, she spoke through the glass of the closed door. “Yes, can I help you gentlemen?”

“Sorry to disturb you, Sister,” Hank said. “We’re with the Chicago Police Department. There’s been some trouble on the corner here, and we’re asking questions in the neighborhood.” He reached into his breast pocket and pulled out his wallet. He showed her his shield through the glass.

She unlocked the door, but at first she didn’t pull it open. He could see her reach up, probably for some kind of chain, and pull a bolt down. There was another bolt at floor level. She bent down for a long moment and worked that. Hank figured she was having trouble with the thing. Maybe they didn’t use this entrance a lot, and the bolt was frozen, rusted in place. Maybe they never opened their doors to anybody. He turned to Marvin, and Marvin gave him a look, one with a lot of eyebrows in it.

Hank took his fedora off, and Marvin touched the brim of his and tipped it. The Sister was shorter than Hank figured when he’d seen her coming down the stairs. Maybe she was five feet tall, not an inch more.

“I’m Detective Purcell, Sister,” he said. “This is my partner, Detective Bondarowicz. We’d like to ask you some questions.”

She didn’t tell them what her name was, and she didn’t ask him what kind of trouble there was, and she didn’t faint dead away like some old doll in the movies. All she said was “Of course,” and then she turned around and started slowly climbing back up the stairs. Marvin pulled the door shut behind them, and they followed her.

When she reached the first-floor landing, she stopped. It was a good-sized space, a sort of greeting area, a foyer, the nuns might call it. There was a wooden cross with a figure of Jesus carved out of lead on the wall and a couple of pictures of saints looking at the ceiling. One of the saints was praying and her body was full of arrows. She was wearing a halo.

Hank looked around. He figured this must be where the nuns brought their guests. An old brown sofa with doilies on its arms and three wooden chairs fleshed out the room. The chairs looked like they weren’t built for comfort, just for sitting.

The Sister sat down in one of them and nodded for them to find some for themselves.

Hank put his hat on a chair next to him, and then he turned to the nun. “Sister, we’re wondering if you or the other Sisters saw anything suspicious tonight. Anybody prowling around the corner late this evening?”

Article continues after advertisement
We Sisters don’t spend much time looking out the windows, concerning ourselves with the neighborhood. I don’t think anyone noticed anything out of the ordinary until the first police car arrived at the corner here.

She didn’t pause at all. Sitting straight with her hands in her lap and the toes of her shoes barely touching the floor, she said, “Our days and nights are regulated. After dinner, we retire to our rooms and prepare for the next day’s school lessons. As I’m sure you know, we teach not far from here, at St. Fidelis School just up the street. At ten every night, we gather together for our evening rosary, to call for God’s judgment against Communism. At eleven, we withdraw to our rooms and prepare for sleep. Tonight was like any night, all quite normal. We Sisters don’t spend much time looking out the windows, concerning ourselves with the neighborhood. I don’t think anyone noticed anything out of the ordinary until the first police car arrived at the corner here. That was about midnight. It was the police siren that drew our attention.”

Marvin cleared his throat and looked up from his notepad, “I noticed that your windows are all shut tight. It’s been mighty hot these last two days. Do you keep your windows closed and the shades pulled even when there’s this kind of heat?”

“Yes, of course. We try not to think about the heat.”

“So you wouldn’t have seen or heard much of anything from the corner?”

“No, nothing, until the sirens, as I said.” She had small, plump hands, and Hank watched them. They were motionless in her lap. They looked like medium-sized potatoes, red ones. Her knuckles, pinched in, looked like potato eyes. She didn’t seem nervous or frightened, not even worried. She was a woman used to telling the whole truth, a woman who never gave you half of it. She could talk to school kids and cops, priests—and presidents too, probably.

“Sister, what grade do you teach?” Hank asked.

She didn’t speak for a moment, and then she said, “Why do you ask?”

“How old are the kids you get in second?”

She looked at Hank. There was a question in her eyes again. Hank could see it. She wanted to know why he was asking about her teaching, her students.

“Just asking, Sister, nothing else.” He said it, and he knew she knew he was lying. He was thinking of the boy in the suitcase, how young he was.

“The children range from six to eight. It depends sometimes on how much or how little education the child has had before coming to us. We have a lot of immigrants, Poles mostly now since the war. Some of them come not knowing a letter of the alphabet, and some can read Dante’s Inferno.”

“Thanks, Sister,” Hank said, standing up. “We won’t bother you or the other Sisters any more tonight, but if any of you remember seeing anything, we’d appreciate it if you’d let us know. Even if it seems unimportant.”

She stood up and followed them down the stairs.

“I’m sorry, Sister,” Marvin said as he turned toward her at the bottom of the stairs. “But I didn’t get your name. We’ll need it for the report.”

“Of course,” she said, “I’m Sister Mary Philomena, the Sisters of St. Joseph.”

The Best Crime and Mystery Debuts of 2018 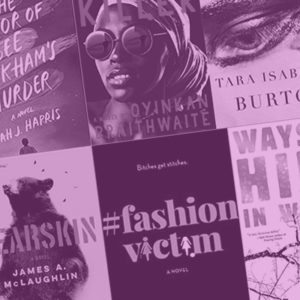 The Best Crime and Mystery Debuts of 2018 If we had to sum up the theme of this year's debut mystery and crime fiction in one word, it would be "maturity," for so many...
© LitHub
Back to top