"On a steamy summer day, the residential streets are absent of people and can possess an unsettling quiet. Where is everyone?"

The following is excerpted from the introduction to Palm Springs Noir.

Ten years ago, when my first noir short story, “Crazy for You,” was published in Orange County Noir, my mother-in-law asked me to define the genre. She read mystery fiction and cozies but wasn’t familiar with noir.

“In noir, the main characters might want their lives to improve and may have high aspirations and goals,” I said, “but they keep making bad choices, and things go from bad to worse.”

Her response was immediate: “Like real life.” We burst into laughter, but it was tinged with the bittersweet pain of knowing.

All of us, at one time or another, have found ourselves in sticky situations with more than a couple of ways we might go. I’d like to think most of us take the high road, the ethical and moral path. In noir, characters follow the highway to doom and destruction. They are haunted by the past, and the line between black and white, right and wrong, dissolves like sugar in water. The hero rationalizes why it’s okay to do whatever dark thing they are about to do.

Crime novelist Laura Lippman summed up noir: “Dreamers become schemers.” People are blinded by nostalgia as they try to outrun or escape their pasts. Afflicted affairs, lies and transgressions, and murky secrets color the world of noir. Characters end up mired in sex, greed, and murder, unable to extricate themselves.

And setting. The best noir writers make us feel the heat of the sun, the touch of a lover. Setting can be gritty but can also be sublime, no longer relegated to urban locales and seedy hotel rooms but also mansions and swimming pools. Hence, Palm Springs, which may seem like an odd setting for a collection of dark short stories—it’s so sunny and bright here. The quality of light is unlike anywhere else, and with an average of three hundred sunny days a year, what could go wrong?

The area is famous for many things: 130-plus golf courses make it the golfing capital of the US; the largest concentration of midcentury modern residential architecture in the world; and with fifty thousand swimming pools at last count, Palm Springs has more pools per capita than anywhere else in the US. And nothing says Palm Springs more than the four thousand wind turbines that provide enough electricity to power the entire Coachella Valley.

While the greater Palm Springs area has its share of dive bars, its alleyways tend to be tidy and clean, and femmes fatales are more likely to be found in bathing suits than slinky dresses or tailored suits. But on a steamy summer day, the residential streets are absent of people and can possess an unsettling quiet. Where is everyone? You’re reminded to lock the car and front door.

The history of the area goes back to the 1700s with the Agua Caliente Band of Cahuilla Indians. The population then—around six thousand—has swelled to 450,000, and triples during winter months when snowbirds and tourists escape from their cold homes to soak in the rays. But it wasn’t until the 1930s that Palm Springs got its glitz quotient and caught on as the getaway of choice for Hollywood stars. Movie moguls instituted the two-hour rule: actors had to be within two hours of the studios in case they were needed, and Palm Springs, 107 miles east of Los Angeles, fit the bill. The desert city was also safe from the gossip columnists.

Elvis Presley’s honeymoon house sits in Vista Las Palmas and offers tours. Frank Sinatra had a house here, as did other Hollywood luminaries, some of whom, along with Frank, are buried in area cemeteries. Clothing-optional resorts dot the environs and the nation’s first all-LGBTQ city council governs the city of Palm Springs. This arid, ninety-four-square-mile Southern California tourist destination is a verdant patch of green smeared across the beige blanket of the Mojave Desert. The green derives, in part, from the vast underground waterways.

The aquifers are not all that goes on that you cannot see. The greater Palm Springs area has a massive homeless population, gangs, and crime. Property crime here is 72 percent higher than the nation’s average. And the granddaddy of fault lines, the San Andreas, bisects the Coachella Valley. Experts say it could go at any time. That, plus the mind-numbing windstorms that hit the north end, 120-degree heat in the dead of summer, and the snakes, tarantulas, and various scorpion species would put anyone on edge.

At the far southern end of the valley, the man-made Salton Sea, currently thirty-five miles long by fifteen miles wide, with an average depth of thirty feet, threatens to dry up. If lawmakers don’t do something soon to rectify the situation, the dust from the dried-up sea will wreck the lungs and sunny dispositions of the residents across the valley and many other Southern Californians. Migratory birds will lose a necessary layover. A noir situation if ever there was one.

Noir appeared in the 1920s as a reaction to the then-popular cozy mysteries. It soon distinguished itself from detective fiction with its fast-paced storytelling, gritty scenarios, and use of sex as a means of advancing the plot. In the 1940s, film noir arrived, and remained popular throughout the 1950s.

In the sixties and seventies, noir took a little rest. There was an odd sense of optimism. We believed that we’d overcome the forces of evil and anything was possible. But then something happened. It didn’t go as planned. Noir returned with a vengeance, thanks to publishers like Akashic and others. And thanks to the state of things in our current political situation as well, there are wars that never seem to end. Fitting, because in noir, sometimes the problem is not so much the person as it is the government. People are always blaming someone or something else. Character disorders and narcissism run rampant in noir.

Its complexion has changed. Once the province of mostly white men, now female, LGBTQ, and nonwhite authors are making their presences known, writing powerful, brutal stories.

Are the writers and readers of noir inherently different from those who read and write cozies, thrillers, and mysteries? Are we more jaded, scoffing at the good guy winning? Noir stories don’t end well. They may end just, but they won’t end happily. And are we drawn more to gloom than the average writer? Maybe we’re able to be cheery enough in our daily lives but secretly—or not so secretly—hold a dim view of the world. We have secret sadnesses and regrets nursed in the privacy of our own minds, which we funnel into our fiction.

In grade school I read Nancy Drew—not exactly noir; in fact, the opposite of noir. But in high school, as my parents’ marriage went down the drain, I stayed out more than in, hung out with townies, got into drugs, and had a meth-head boyfriend who got us pulled over by the cops in his vintage turquoise ’57 Chevy and was arrested. The cops told me to drive his car home. But they never arrested me or even warned me. Was I even there?

The stories in this collection come on like the wicked dust storms common to the area. More than half are by writers who live here full-time; all have homes in Southern California. They know this place in ways visitors and outsiders never will. These are not stories you’ll read in the glossy coffee-table books that feature Palm Springs’s good life. There is indeed a lush life to be found here, but for the characters in these stories, it’s often just out of reach.

People from the past have a nasty habit of showing up, and no one is more fraught than the scientist who awaits his fate, a cyanide capsule lodged in his cheek as he prepares to bite down. A vacation rental agent trying to make a fresh start gets caught up in the lives of the vacationers, and an Airbnb landlord discovers renting has a downside. Private eyes chase down missing people and others go on hikes and never return.

Local landmarks, historic neighborhoods, and the ubiquitous swimming pool make appearances beneath the glaring sun. Moorten Botanical Garden (appearing as “Morston’s”), Spencer’s, and the Ace Hotel are among famous spots with cameos. After you read these stories, hot tubs and swimming pools will never look the same.

Each one is a gem, and as the editor of the collection, it’s gratifying to offer them to you. I hope you enjoy. 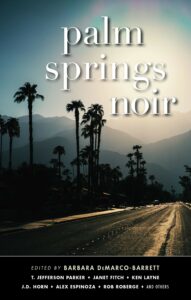 Barbara DeMarco-Barrett spends time in the desert whenever she can. She hosts Writers on Writing on KUCI-FM, and her book Pen on Fire was a Los Angeles Times best seller. Her short story "Crazy for You" was published in USA Noir: Best of the Akashic Noir Series. She has also published in the Los Angeles Times, the Los Angeles Review of Books, Inlandia, Shotgun Honey, Crossing Borders, and The Literary Hatchet. 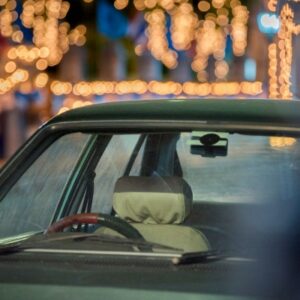 Women love true crime. While certainly not a universal truth, it’s a generalization that feels apt enough that even SNL has noticed....
© LitHub
Back to top