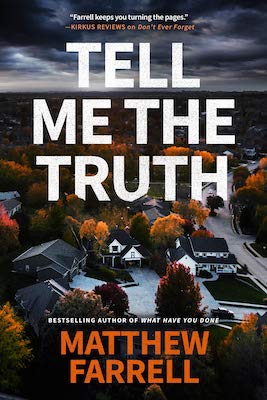 The following is an exclusive excerpt from Tell Me the Truth, the latest novel from Matthew Farrell. In the following passage, a family man returns home in the middle of the night, just in time to find his wife stumbling around outside covered in blood, and holding a bloody knife. What has she done, and how far will her husband go to keep her secret?

The moment Noel Moore stepped through the front door and put his bags down, the hairs on the back of his neck stood up. It was a couple of hours past midnight, so the house was supposed to be quiet, but on top of that stillness was an unease that told him things were not as he’d left them.

The bottom floor was a maze of interconnecting rooms full of furniture and fixtures that his wife, Mindy, had picked out with their interior designer. He stepped around overstuffed couches and wingback chairs as he wove through the formal living room, then the dining room, the family room, and the kitchen. Nothing seemed out of place in the darkness. Everything appeared as it should have been.

He was conscious of each step he took up the grand staircase and along the hall toward the he and Mindy shared. His movements were muffled by the runner that stretched from one end of the second floor to the other. He opened the double doors and crept in.

The room offered only shadowy outlines of things he knew were there. A dresser. A nightstand. Mindy’s vanity, tucked in the alcove just outside the sleeping area. Their bed sat in the center of the room, its four oak pillars stretching toward the ceiling. The covers were pushed back. The bed was empty.

Noel craned his neck to listen for something that might tell him where his wife was. The en suite bathroom was dark, but he crossed the room and poked his head in anyway.

Noel left the suite and walked down the hall to his son’s bedroom. He was familiar with the outlines in this room too. Charlie’s oversized drafting desk, which sat under his window. The indoor basketball hoop he’d begged for leading up to his thirteenth birthday. The beanbag chair always leaning against the closet door that wouldn’t stay shut. The bed. His boy.

Charlie was a belly sleeper. He was on his stomach with his face peeking out from the top sheet. His arms were out in front of him like he was flying. Noel could hear him breathing as he slept peacefully. Everything was fine here.

He retreated from Charlie’s bedroom and made his way down to the last door at the end of the hall. He turned the knob and pushed into his daughter’s room. Jenny had used a night-light since she was three years old, so there was no need to decipher the outlines of anything. In the glow of the small bulb, he could see her dresser, her writing desk, and the wicker swing chair that Noel had masterfully hung from a beam in the ceiling. He could see the antique dollhouse they’d put together one Christmas Eve, probably ten years ago. But most of all, he could see Jenny’s empty bed.

Movement flashed in Noel’s periphery, and he stepped toward the bedroom window. He caught the distant beam of a flashlight bouncing through the woods at the back of the house. As soon as he began to track it, the flashlight went out. Noel pressed his hands against the glass, watching for a few minutes, waiting for the flashlight to come back on, almost willing it to do so. But the area within the thick brush and tall trees remained as black as the night.

He left the room, hurried through the hall, and descended the stairs before barreling out the back patio door, which had been left unlocked. The night was cool for August, but he felt hot as he ran through the yard and into the woods that surrounded the house.

As soon as he reached the edge of the yard, he realized he’d forgotten to grab a flashlight himself. Luckily, the moon was full and sat in a cloudless sky, enabling him to navigate through the low-hanging branches of elms and maples. He fought through the thorn bushes that scratched his ankles and shins and dodged the cluster of birch trees just past the old fort Charlie and his friends had built a few summers ago.

The clearing was just ahead. Noel knew this was where the neighborhood kids met to drink and smoke and hang out. Over the years he’d found piles of discarded beer cans, empty bottles of liquor, and countless cigarette butts, which had been the evidence his wife had needed to get a confession from their then-fourteen-year-old daughter after they’d caught her hiking back to the house at dawn.

Noel stopped running and held his breath to listen. There was no noise. No voices. No whispered laughter. Nothing. He crept toward the clearing, then suddenly heard the crunch of fallen leaves.

The footsteps continued toward him.

Noel pushed past the last set of berry bushes. “Whoever is there, I want—”

He stopped as he saw his wife stumbling out of the clearing, catching herself before falling to the ground. She regained her balance and stood, looking at him, her eyes wide with terror. She opened her mouth to speak, but only a low groan emanated from the back of her throat.

Time slowed—then stopped. With the help of the moonlight, Noel could see every detail: The blood on Mindy’s face. On her arms. The stains soaked through the T-shirt she always wore to bed. The blood dripping from her fingertips like she’d dipped her hands in paint. He saw the knife she was holding, too, its steel blade trembling in her grip.

“Mindy,” Noel choked out. “What happened?”

She tumbled against him, and as soon as her face hit his chest, she began sobbing and screaming, and all he could do was hold her tight to muffle the screams until he could find out what was going on.

He knew they had to stay quiet.

It was important not to wake the neighbors.

The Best Reviewed Crime Books of the Month: June 2021 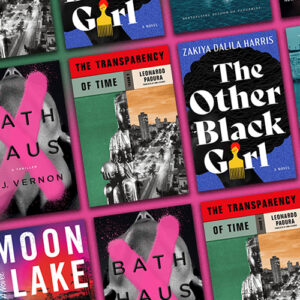 The Best Reviewed Crime Books of the Month: June 2021 A look at the month’s best reviewed crime novels, mysteries, and thrillers. Laura Lippman, Dream Girl (William Morrow) "The...
© LitHub
Back to top