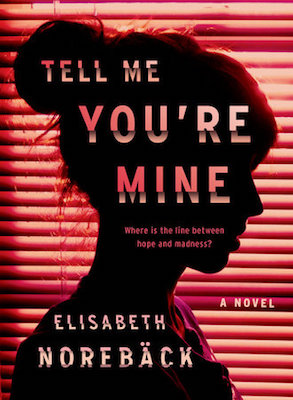 The following is an exclusive excerpt from Tell Me You’re Mine, by Elisabeth Norebӓck, a tale of therapy and secrets. In the following passage, a therapist leading a group therapy session encounters a young woman with a hidden agenda.

In a few minutes, it will be one o’clock. My fear has increased. I can’t handle another panic attack. I try to calm myself down. I try not to let my emotions get the better of me. I try to think rationally, to talk some sense into myself.

It’s just a figment of your imagination, Stella.

There has to be some rational explanation. It’s a coincidence.

It’s a misunderstanding. It can’t be her.

Anxiety gnaws at my stomach, and my field of vision narrows to a single blurry point of light.

Anxiety gnaws at my stomach, and my field of vision narrows to a single blurry point of light.

I rush out into the hall and down to the bathroom. I fall on my knees in front of the toilet and throw up. Then I stand up, holding on to the edge of the sink, and close my eyes. Wait for the dizziness to subside.

I rinse my mouth, wipe my forehead and the rest of my face with a paper towel. I study my expression in the mirror. Attempt a smile. I leave the bathroom and go to the lounge.

Nine red armchairs circle a round rug. Someone, probably Renate, has prepped the room, and the air is fresh. I sit down in my usual chair and force myself to relax, breathe.

Sonja comes in next and sinks down in the chair closest to mine. When the session is over, she’ll be the first to leave. She has social anxiety disorder and has been in this group the longest. Still, she never speaks. I greet her; she answers with a motion of her hand.

My armchair is placed with its back to one window. To the left of me is another wall with high windows, to the right is the door. I look at the clock above it and glance at my wristwatch. I’m always careful to come just before the session begins and finish exactly ninety minutes later.

Clara is already in place, afraid as she is of arriving late.

She sits on my left. Her expectations for herself are incredibly high. Despite a good job as a project leader in a successful media company, she constantly doubts her own abilities.

Magnus is here, too. He sits in the chair opposite me with his eyes glued to his old shoes. He looks up, brushes his hair out of his eyes, then looks down again. Chronically depressed.

Her black, shiny hair is pulled up in a ponytail. She is wearing light blue jeans, a black top, and a dark brown leather jacket. She gently closes the door behind her and slides down into the armchair next to Sonja.

I realize I’ve been holding my breath and release it.

Her face is impossible to interpret. I resist the impulse to stare at her. To my great relief, the strong emotions of the last meeting do not return. She isn’t as similar to Maria, Daniel’s sister, as I thought the first time. At least that’s what I tell myself.

Our eyes meet. I realize this isn’t a coincidence. Isabelle is here for a reason.

I am about to start when Arvid pulls open the door and rushes in. He throws himself into the chair next to Magnus. I give him a long look and hope he understands how much I disapprove of his habitual lateness. He ignores me. Takes out a box of mints and puts one in his mouth.

I begin: Welcome. As I told you last week, we have a new group member starting today. Her name is Isabelle.

Short silence. Everybody looks at Isabelle. She smiles, pretending to be shy.

She does it well. Where did she learn to lie so convincingly?

Magnus: I don’t think Anna should have left. She was just starting to get somewhere.

Clara: She had to stop in order to keep progressing, she said. This is more about you and how much you dislike change.

Clara: How’s your week been, Arvid? You had a family reunion to go to, right?

Arvid: Ugh. I thought I was gonna go insane. Being with my family for a couple days, what a fucking nightmare. My sister was weird. As usual. Dad drank, Mom was a nervous wreck. Then we pretended to be a “happy family” for the relatives. Good God. Total fucking fakes.

The door opens, Pierre comes in.

I give another long look. Doubt he even notices it. Pierre pulls out the armchair next to Isabelle. She seems embarrassed.

Me again: Welcome, Pierre. Nice of you to make it. As I told the others, Isabelle is joining the group starting today.

Pierre: Hi, Isabelle. Hope you contribute more than some of the others in here.

He looks meaningfully at Sonja. Isabelle lowers her gaze to the rug. Is she annoyed?

Pierre: Therapy is pointless if you never open your mouth. So why are you here?

Her voice catches. She clears her throat, looks at me, looks down again. She seems genuinely sad. Have I misjudged her? Or is she acting again?

Isabelle: It went so fast. I wasn’t able to make it home in time. We never had the chance to say good-bye. I didn’t even know he was sick.

Arvid: Home? Where do you come from, is that a Dalarna County accent?

She blushes. If she’s just acting she’s really good at it.

Isabelle: I moved here a year ago August to study.

Me: Were you born in Dalarna?

The rest of the group reacts to my direct question. But I can’t control myself.

Isabelle: I was born in Denmark. But I’ve lived in Borlänge most of my life.

Magnus: Do you like Stockholm? Isabelle: It’s thanks to Dad I’m even here.

She laughs, seems embarrassed. I smile encouragingly. I don’t know what to think. Is she really that similar to Maria? Maybe I’m wrong.

Me: It sounds like you were very close to your father?

Can she see that I know who she is? And if so, does she realize I’ve seen through her carefully constructed façade?

Isabelle: He was everything to me. That’s why it came as a shock when I found out he wasn’t my real father.

Now we’re getting there. Here it comes. In just a moment everyone will know her real reason for being here.

Arvid: Did you think he was your biological father?

Isabelle: Yes. But he adopted me when he and my mother met. I don’t know who my real dad is.

Did she tell me that at our first meeting? I don’t remember. Who is the woman she calls her mother? Is it her mother? Her biological mother?

The conversation continues, but I find it impossible to concentrate on what anyone is saying. Is time standing still? Or is it going faster than usual?

“Stella? Thank you for today?”

I snap out of it, meet Pierre’s derisive look and glance up at the clock on the wall: 2:33. My wristwatch shows the exact same time. Unsure if I can trust my voice, I nod and stand up.

I’m aware of how strange I’ve been acting. I let us run overtime, I haven’t paid attention for the most part, and I asked Isabelle a direct question, for no apparent reason. Usually I only speak when the conversation stalls, sometimes to help someone progress in their reasoning. But never like this. Not in this clumsy way.

Sonja is first out of the door; the others follow. I usually leave the room immediately, too. But today I remain standing, unable to move. I can tell my breath stinks. My armpits are sweaty, and I hope it’s not visible.

I can’t tear my eyes away from Isabelle.

She drapes the strap of her bag over her shoulder. As she turns, her ponytail dances to the side.

Her right ear is pointed and slightly longer than the other.

There are only two other people in the world with an ear like that.

Her right ear looks exactly like Daniel’s and Maria’s.

That insight is a punch in the stomach. My nausea returns.

I hear Daniel’s voice. As clear as if he were in the room. Yes, I have an elf ear, are you gonna make fun of me for it? You know it just means I’m gonna bring magic into your life, Stella.

I want to tell her I’ve been waiting for this day for over twenty years. I want to go over to her and take her in my arms and never let her go.

“Thank you for today,” I whisper. That’s all I can manage. Isabelle smiles. The dimple in her cheek deepens. She leaves. She’s gone.

I sink into the armchair, close my eyes, and clench my trembling hands.

I buried you. We stood at your headstone in the cemetery. We wept and said good-bye.

Still, I never stopped looking for you. I searched for you in every crowd, in every face, on every bus, and in every street. Year after year.

Hoping. Wishing. Waiting. One day you would come back.

But then I stopped. Stopped hoping, stopped wishing. I had to move on. Either that or I had to follow you, to disappear. I moved on. For my own sake, for my son’s. Was that wrong?

I don’t understand why you pretend we’re strangers. Do you want to see what kind of person I am?

Want to see if I feel regret? If I’m plagued by guilt? Do you hate me as much as I hated myself?

Do you want to punish me? Make me feel pain? I already do.

The pain of you never leaves me. It’s as much a part of me as you are. It never lets me forget. What is it you want to know, what do you want me to say?

I can only say sorry. Forgive me, Alice.

From TELL ME YOU’RE MINE, by Elisabeth Norebӓck. Used with the permission of the publisher, G. P. Putnam’s Sons. Translation copyright © 2018 by Elizabeth Clark Wessel. 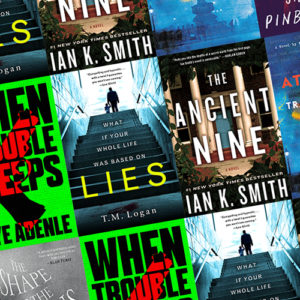 9 Crime Novels You Should Read in September At the start of every month, CrimeReads staff members look over all the great crime novels and mysteries coming out in the weeks...
© LitHub
Back to top