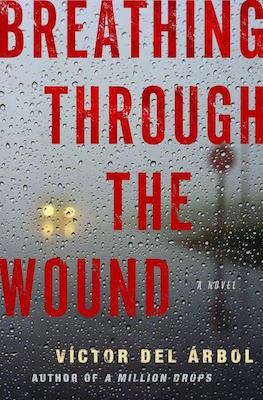 The following is an exclusive excerpt from Breathing Through the Wound, by Víctor del Árbol. Eduardo Quintana, a painter, felt his life lose all meaning when his wife and daughter were killed. He no longer cares what happens to himself. But when he is approached by a woman who asks him to paint a portrait of the man who killed her son, he is drawn into the tragic incident, and finds himself on the hunt for a killer.

Strolling the deserted streets of Madrid at that hour of indecision—when everything is on the verge of happening but nothing yet has—redeemed the city, concealing its misery, creating a false sense of benevo­lence. Eduardo walked slowly, feeling free to go wher­ever he liked without the shouting and chaos that he was not yet re-accustomed to, after fourteen years of absence. He recognized all the streets, but in a way he felt like a foreigner.

What d’you say we go off in search of treasure? his father used to say, his voice hoarse from the endless cigarettes he smoked, and which had eventually taken him to the grave. Going “off in search of treasure” meant spending the Sunday rummaging through the stalls of El Rastro— Madrid’s flea market—among the torrents of people who streamed out of the metro, spilling down Calle de Roda and Calle de Fray Ceferino, toward Plaza de Cascorro and then down to Ribera de Curtidores. Once old tributaries leading to Río Manzanares, these were a noisy, delightful chaos, where people wandered between makeshift stalls and cozy taverns, back and forth from little secondhand treasures to chatos of wine and tapas.

Those crowds had been so exciting when he was a kid. He’d listen wide-eyed as his father told him the story of the soldier Eloy Gonzalo, left as a baby on the doorstep of an orphanage and later to become one of the national heroes of Cuba; or told him how cattle had been slaughtered in the old abattoirs, their blood running down the steep streets and staining them red. Eduardo was fascinated and could easily envision the stalls set up by the traveling barbers, auctioneers and secondhand dealers, the tanneries, the municipal slaughterhouse— things that no longer existed but that somehow still formed part of an atmosphere that was palpable there at the market. “It’s our very own medieval medina,” his father used to say proudly, holding his son’s hand tightly to keep the human river from sweeping him away.

But everything had changed: the things, the scen­ery. His perspective.

He walked into a bar close to El Retiro park. It was still early and the tables were empty. At the bar stood a couple of customers who looked like they’d had a long and not particularly prosperous night. A bored waiter watched the television, hanging from the ceiling in one corner, absently. Eduardo ordered a whiskey, straight up. It was just past eight in the morning, but the waiter seemed nonplussed—no doubt seasoned to these battles.

Eduardo smoothed his hair nervously. Prickly gray-speckled stubble was growing in around his loose jowls and small mouth. A pale-skinned man, he smiled too much when he was uncomfortable, which essentially meant any time he was forced to carry on a minimally drawn-out or unwanted conversation. His eyes—darting, evasive, sleepless—were like those of a rat trying to make itself invisible. Occasionally some tiny little thing attracted his attention and his eyes glimmered with a dim light that, for an instant, hinted at the man he had once been. But soon the black cloud that hung over everything engulfed him once more.

“No matter what’s upsetting you, friend, your liver doesn’t deserve this kind of punishment.”

Eduardo made a face intended to banish the in­truder. He downed his drink and made his way slowly up Cuesta de Moyano until he reached the fountain of The Fallen Angel, and took a break at the octagonal granite pedestal supporting the sculpture.

“His pride had cast him out from Heaven, with all his host of rebel Angels…round he throws his baleful eyes, that witnessed huge affliction and dismay, mixed with obdurate pride and steadfast hate,” he recited qui­etly, recalling an old Fine Arts professor who’d encour­aged his students to study the bronze body that was being strangled by an evil snake—especially its facial expression, filled with dramatic intensity; it was an exact reflection of the verses of Milton’s Paradise Lost.

Everything about it was still: the space, the time, the sculpture itself.

Eduardo knew that feeling: the exasperating and perpetual stillness, the certainty that nothing is mutable. He could order his legs to walk one meter to the right—or two, or three—and come up against a wall; he could do the exact opposite and yet still butt up against the same wall, he was sure he wasn’t getting anywhere, that he was just like that petrified sculpture. The lack of trivial everyday thoughts and the obsession with one repetitive, grotesque, all-consuming thought was what his therapist called insanity.

But he wasn’t insane. He was just dead.

He strolled slowly toward the Crystal Palace in El Retiro park. Somehow, his steps always seemed to lead him there. He liked to sit for hours by the huge pond, gazing at the bald cypresses; he was fascinated by those tall, slender trees able to take root in the muddy earth.

He thought about the last time he’d been there with Elena and Tania.

Elena had looked beautiful, wearing tight jeans rolled up to mid-calf and a spaghetti-strap top with black and white splatters that looked almost random.

“What made you fall in love with me?” Eduardo whispered, embracing the memory. He had asked Elena that question often, and she had always responded with a happy, sincere laugh, and kissed him on the lips with­out answering. She never gave him a reason; what she did do was make him the happiest man in the world.

He picked up a small rock and hurled it out across the pond’s placid surface, trying to make it skip. The smooth stone skipped twice and then sank, leaving an expanding ripple that soon disappeared as well. Eduardo smiled, recalling the stone-skipping contests he used to have there with Tania. She always won— her pebbles made it from one side of the huge pond all the way to the other. His daughter was a girl ill-at-ease with the changes taking place in her body, on the verge of becoming something that both scared and perplexed her. Tania was fourteen years old, and her wide eyes already showed signs of rebellion, which came out in simple ways—truculence, back-talking, being contradictory—that he didn’t know how to han­dle. Had she been given the chance, she’d have eclipsed her mother both in beauty and willfulness.

A different type of tree—hardy horse chestnuts, rooted deep in the soil—lined the shore to the right of the great pond. Looking up, Eduardo saw a woman sitting under the latticework of leaves and branches, smoking absently beneath the dripping leaves, gazing at the sur­face of the pond. Her head was turned to one side and she looked as though she’d just emerged from deep reflection. Faint disappointment or sadness puckered her lips, like they were the tip of the iceberg of her thoughts. Her face was thin, drawn, as though she’d had a prolonged illness and was still convalescing. A brown raincoat lay draped across her thighs—matching her skirt, sweater and high heels—and she had thick, intensely black hair that tum­bled messily over her shoulders in girlish disarray.

For a long while Eduardo watched her. He knew an exceptional face when he saw one. From his bag he pulled a sketchpad and charcoal pencil, and with quick strokes roughed out her profile, before her true expression had a chance to disappear. Unaware of being observed, the mysterious woman offered him a tiny cove of sincerity, an insight into who she was that she never would have shown, even posing nude on the divan in his bedroom. When people feel examined, even if their intentions are true, the seed of a lie is born.

As soon as she realized she was being watched, that woman’s naive expression—her sincere modesty—would vanish, and he’d never be able to get it back. And with it would go the image of Elena that Eduardo had just evoked. Elena was dead. And yet the more he contem­plated that woman’s silhouette, the more perplexed he felt, the more flustered by her presence. Because, in a way, that woman was a precise reflection of his wife, her exact image distorted, like the other side of an invisi­ble looking glass. As if her skin had been ripped off and placed on another body, allowing her to keep living.

The mirage lasted a few more precious moments, until the woman tucked a few strands of hair back with a relaxed gesture—but on looking up, her eyes met Eduardo’s. For a split second she was still herself, as if her pupils were still fixed on the pond without having seen him, brimming with warmth and tenderness. But that look evaporated almost immediately, giving way to a chaotic jumble of allegations. Brusquely, she picked up her raincoat and made off into the trees.

Eduardo went to where the woman had been sitting, looked out where she had been looking, breathed in the air in case she’d left the trace of a fragrance. Nothing.

When he got back to his apartment, he pulled out a canvas and set it up on his easel. It had been a long time since he’d felt that sense of urgency—that need to capture something before it disappeared, aware of the fact that with each passing second it would slowly evaporate like smoke.

Excerpted from BREATHING THROUGH THE WOUND by Víctor del Árbol, translated by Lisa Dillman, recently published by Other Press.

7 Books Told From the Perspective of Domestic Workers 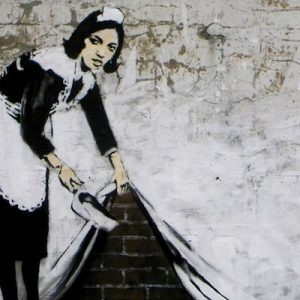 7 Books Told From the Perspective of Domestic Workers We all feel like an outsider sometimes (or all the time). So it’s no surprise that we love to root for outsider protagonists,...
© LitHub
Back to top