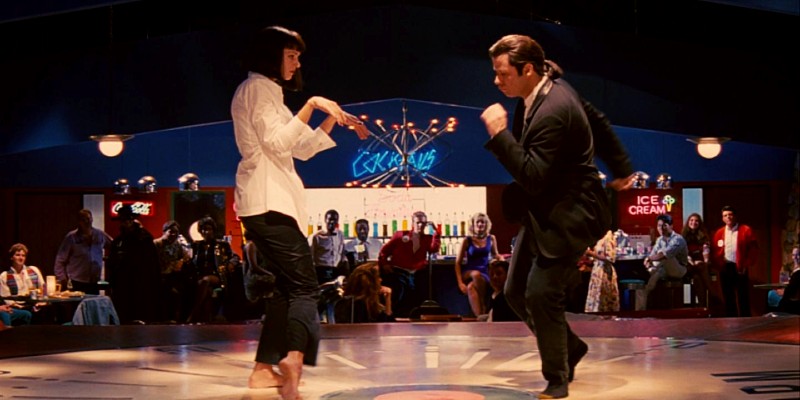 Because people may cheat, steal, and kill, but their hips don't lie.

Anyone who knows me well can tell you two things. One, I like crime fiction in all its forms. Two, I like it when the characters in those crime fictions break into some kind of dance. Ideally, the dance will be exuberant, revelatory, and/or deeply unsettling, but really I’ll take just about anything where the hips get loose. Noir sometimes gets a bum wrap as a bleak and forlorn corner of the cultural world, and it’s true, there are some horrible things out there, but there’s also a dark, subversive wit running through the genre that’s always been part and parcel of its appeal. That’s my position, anyway. There’s also something so thoroughly efficient about a dance, something that can capture an entire life in a few deft movements. I’m thinking Bacall’s shimmy in To Have and Have Not, or Ilsa and Rick pressing cheeks in the final days of a free Paris—those moments that run an uncanny shiver down your spine. In the interest of pursuing passions to their logical ends, I’ve collected here twelve of my favorite moments in the history of crime and dance. Some are composed of a few steps, others are full-blown choreographed routines. All are strange and wondrous to behold.

In reviewing To Have and Have Not for Time, the novelist James Agee noted that Bacall had “a born dancer’s eloquence in movement.” That eloquence is on display throughout the film, but there may be no more perfect, evocative moment than this one, near the film’s end, when she makes her exit with a shimmy to accompany Hoagy Carmichael’s piano. It’s a movement that tells you everything you want to know about the character. It hurls her off the screen one final time and gives you a sense that she is a real, living, breathing, dancing human. The movie was Hawks’s, the script was from Faulkner and the novel from Hemingway, but Bacall may just outdo them all with this brilliant little moment of artistic exuberance.

Easily one of the most iconic dance sequences in film history, and also one dear to hearts at CrimeReads, where we kicked off our first day of existence by broadcasting this clip to the world. (It had something to do with our editorial vision, I think…) Now some trivia: the dance was filmed in a cafe in Vincennes with a crowd looking on and a news team covering it as some kind of artistic event. The song they’re actually dancing to is John Lee Hooker’s “Shake It Baby” but the sound was taken out and they didn’t use the music in the movie. (Probably a budget / rights issue.) That means the claps, snaps, and stomps were dubbed in post-production. And it also sheds some light on one of my favorite pieces of this: all the dancers seem to be off the beat. I’d always chalked that up to their being French, and probably that’s part of it, but let’s give the cast a little more credit now, huh? Turns out it was Godard himself who couldn’t quite find the rhythm. A true outsider.

“Put the Blame on Mame” was written Allen Roberts and Dora Fisher specifically for Gilda, and it serves as the perfect, subversive counterpoint in this iconic femme fatale flick. The song’s story runs out a string of historical disasters all supposedly tracing to one woman’s infamous appeals—a ludicrous little piece of irony aimed at a society that liked to trace its own shortcomings to women’s sexuality. All that, and with Rita Hayworth’s vigorous rendition of both song and dance, you can feel the tensions in the room rising to a near murderous boiling point. The movie just gets more and more vicious from there, and we hear echoes of “Mame” throughout the score.

The scene where Doc stops off at the diner on the road to Cleveland ranks as one of the most poignant scenes in the annals of film noir, a perfect mixture of buoyancy and dread as Doc, mid-escape but with the police on his trail, overhears a conversation between the proverbial local youths and decides to heap a fistful of quarters on them so that the girl might dance. And she does dance. Played with an eerie energy by Helene Stanley, the girl breaks out a mesmerizing series of somewhat outlandish moves as Doc and the others watch and the temperature in the diner seems to rise. As far as denouements go, this has to be Huston’s finest.

(Author’s note: You will notice here a very large gap in the timeline, between 1950 and 1989. Now, I’m sure there are some really great dance scenes in those intervening thirty-nine years, but I just couldn’t track down any that felt worthy of inclusion, and I also like the idea that Spike Lee and Rosie Perez were reclaiming a tradition directly from John Huston. So, from Asphalt Jungle, we head to the streets of Bed-Stuy…)

How do you open any movie better than that? How do you capture the energy of New York in the summer any better than that? Rosie Perez dancing on a Bed-Stuy sidewalk (Stuyvesant, between Quincy and Lexington for those who are into maps and streets and whatnot), while Public Enemy’s “Fight the Power” plays in the background is one of those indelible, unsurpassable film moments that stay with you forever. You remember the first time you saw it, don’t you? Perez has said since that she practically got tennis elbow throwing all those punches. The world took notice. Do the Right Thing announced Perez as a star to watch, just like it cemented Spike Lee’s place in the film canon. Surprisingly, the music was originally meant to be “Cool Jerk,” with Perez dancing Sixties-style, but Public Enemy was brought in last minute. Lee’s direction to Perez was reportedly pretty simple: “I need you to kill it.” The day’s shoot lasted over eight hours.

Easily the coolest scene in a movie that helped define cool for a solid stretch of the 1990s. Thurman has admitted since that no part of the filming scared her more: “I was more afraid of the dancing than almost anything because it was exactly to my total insecurity…Being big and awkward and still quite young then. But once I started dancing I didn’t wanna stop, so it was a dream come true.” For an added bonus, go here to see clips of Tarantino dancing behind the camera and gyrating next to the actors as the filming carried on. The spirit of Chuck Berry was truly with them that day.

So yes this is stretching the definition of “dance scene” a bit far, maybe, and yes there are other more lavish, choreographed dance numbers in The Big Lebowski (and in the Coen Bros. universe), but do any of them really compare to this, our first exposure to John Turturro’s unforgettably bizarre portrayal of Jesus, the crack bowler / sex offender / Gypsy Kings enthusiast? Let’s also be realistic and extend out the “dance” to include the lead-up, a strange sensual homage to the intricacies and artistries of bowling. It’s damn-near balletic, and yes pretty disturbing given the information supplied to us immediately after, but will anyone who watched this scene ever forget it?

Sure, you could probably parse this moment between Rene Russo and Pierce Brosnan and find some pretty interesting subtexts or you could just give up and admit the thing is pure sex. If you had any doubt about that fact, the dance leads pretty soon after into an eye-openingly liberated sex scene where the two of them kind of crawl up a marble staircase as an entwined, clothes-shedding unit. It’s really wonderful stuff, as is the dance, in large part because neither of them is particularly good and yet they undeniably own the dance floor, just hosing the thing down with charisma. Everything you need to know about the strange, satisfying relationship between art thief and art insurance agent is conveyed to you right here in this number.

Okay so this actually isn’t a very good dance scene, it’s just so schlocky, but I include it in this list first to show you just how committed Pierce Brosnan, an objectively lousy dancer, was to dancing during this period of his career, and second, because one of the credited screenwriters on The Tailor of Panama is John le Carré himself. Now, I have no way of knowing this and I’m not going to go to his surprisingly dishy memoir, Pigeon Tunnel, to confirm it one way or the other, but I like to think the dance number was le Carré’s idea, that he saw the above scene in The Thomas Crowne Affair and went to his co-screenwriters and insisted, dammit, we need to let Pierce do his thing. I will go to the grave believing in this version of events. So, there’s the reason why this is here: a dance scene entirely the invention of the man who also invented George Smiley.

Quite possibly one of the most disturbing thrillers ever conceived, Dogtooth is the story of a family that keeps its children in forced isolation, except for the woman they bring in to sleep with their son, who soon ends up bartering with the other children in exchange for sexual favors, giving them VHS tapes to watch on the sly. It’s a lot. There’s also a scene late in the movie where one of the daughters marks her rebellion by reenacting the iconic scene from Flashdance without musical accompaniment. It’s an incredible moment, one that punctuates the many, many horrors preceding and the few that remain.

In a movie filled with bizarre moments of questionable connection to this dimensional realm, The Locomotion sequence takes the cake. Who are these women? The former homecoming queens of the Inland Empire? Ghosts haunting Laura Dern? A community dance troupe? The answer, like most of the best, most fantastical scenes in the body of an inscrutable director’s work, lies somewhere in the subconscious of David Lynch.

Garland reportedly felt that he had held onto the tone of his preceding movie, Never Let Me Go, too consistently throughout the feature, and with Ex Machina he wanted to explore the power of abrupt or disruptive “gear changes” in order to “do something that just busts up the tone and woke people up.” That mission was certainly accomplished with this absolutely bonkers disco scene with Oscar Isaac falling seamlessly into step with Sonoya Mizuno, shortly after a tense, dreadful late night interaction.

6 Crime Books For Those in Need of a Fresh Start 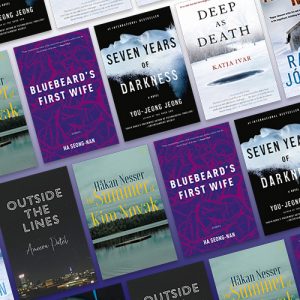 It's time to stay cool with new international crime novels out of cold climes, into two from South Korea, two from Norway,...
© LitHub
Back to top