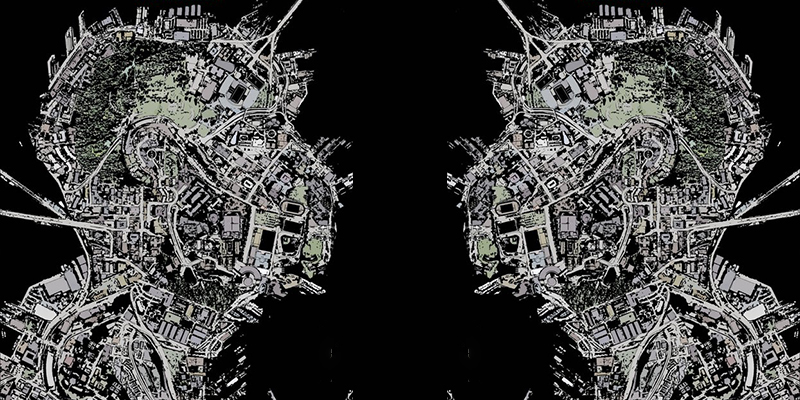 There are few tropes in the wide world of Horror that are more enduring, evocative, or terrifying than the haunted house. Whether it’s Shirley Jackson’s (or Mike Flanagan’s) Hill House, Stephen King’s Overlook Hotel, The Good House from Tananarive Due’s novel of the same name or the Freeling home in Poltergeist, every horror fan has a haunted house that’s burned into the center of their imagination. But the fact of the matter is that some of the scariest haunted houses in fiction aren’t houses at all. 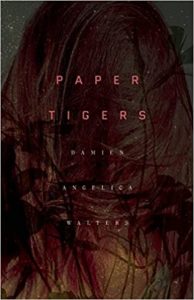 Some of the scariest hauntings are borne out of trauma, and in no other book is this fact examined with such dread and empathy as Damien Angelica Walters’ Paper Tigers. The story follows Alison, a horribly scarred young woman navigating the trauma from the loss of the life she used to know, who soon discovers a photo album in a curio shop that is far more terrifying and alive than it seems at the outset.

In any other writer’s hands, the pure potential of this setup would be scary enough, but because this is a Damien Angelica Walters novel, what starts as an unsettling and deeply human tale of loss and fear gradually transforms into something far more nuanced, frightening and absolutely marvelous. Using main character Alison’s physical and psychological trauma as an inflection point for the true terror of the book, Walters takes the haunting to a far more personal level, bringing the haunt from the pages of the photo album to Alison’s own damaged body, with the force lurking within the album exploiting her deepest insecurities to accomplish its own malevolent ends. Paper Tigers takes the concept of a haunting and pushes it past all safety and sanity, in the best possible way. 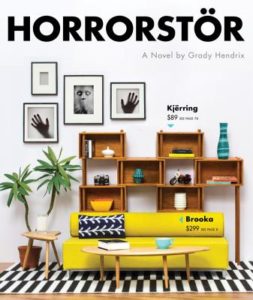 Hendrix’s Horrorstör is a joyous mishmash of occult horror, clockpuncher malaise and incisive social commentary. Set in the IKEA-alike shop ORSK, the narrative follows a group of store employees as they attempt to navigate the strange and unexplainable goings-on inside the big box over the course of one very, very scary night. Between the downtrodden manager and the amateur ghost hunters, the homeless guy just looking for a warm place to sleep at night and protagonist Amy, who can’t quite shake the suspicion that her life, once full of promise and potential, is starting to go nowhere fast.

Like pretty much all of Grady Hendrix’s work, Horrorstör is by turns hilarious, heartfelt and horrifying. But the real trick is how Hendrix makes the drudgery of retail work—and of simply being human—feel utterly haunted and horrifying, long before the employees decide that it’s a good idea for them to hold a séance. 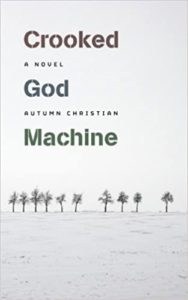 Charles, the narrator and protagonist of The Crooked God Machine, lives in a haunted world. At every moment of every day, he’s faced with a panoply of visceral oddity and horror that, thanks to Christian’s dreamy, lyrical prose, seems to simultaneously exist both in myth and in cruelly hidebound reality. First there’s Jolene, the shrieking swamp witch with a strange, pseudo-sexual fixation on Charles; there are the spider-wired Deadheads that haunt every street and neighborhood screaming commercials at the top of their lungs; and that’s to say nothing of the Apocalypse Brigades, the plague machines, and whatever the strange, shiny sphere is that Charles’ best friend Ezekiel had implanted in the back of his own head.

And then there’s the black-masked God.

God, malevolent and unfathomable, haunts every page of Christian’s bleak, gorgeously grotesque Crooked God Machine, whether invoked by name or not, gradually swelling to fill the whole of Charles’ twisted, hallucinatory journey. As Charles somehow persists through the madness that befalls him at every turn, the masked God grows from distant overlord into an omnipresent phantom from which there may be no escape.

Creepy, relatable, and wonderfully atmospheric, the story of Ines Murillo at highly-secretive and exceptionally prestigious university Catherine House is a slow-burn of a book that willfully refuses to reveal its ghosts before it’s ready. What starts off as a deeply gothic, human tale slowly but steadily morphs into something far more speculative and uncanny, in the best possible way. There are reasons for everything, but answers are never easy within Catherine House, and the things haunting its halls are far stranger than they seem.

Catherine House—both the book and the titular university at its core—runs on the strange, but it’s very deliberate in the approach it takes toward it. There’s a reason that the school is so secluded, and that they take their work so seriously. There’s a reason the students that fall behind in their studies are sent to the mysterious facility known only as The Tower—an ever-present threat that looms over the story like the Sword of Damocles. Everything is on purpose in this novel, including the realizations that the story’s end leaves lingering in your mind long after you’ve closed its covers. 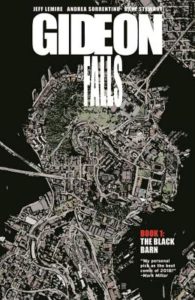 The setup for Gideon Falls reads like a nightmare version of a riddle: what do you call a malevolent, time-traveling, reality-hopping barn that devours people out of thin air? The stuff all your bad dreams are made of. One of the best horror comics out there, Gideon Falls is a haunted house story by way of cosmic horror, encompassing numerous stories, time periods, and void-faced monsters lurking just beyond the shadows. What starts as a saga of two lonely, desperate characters slowly grows and warps in increasingly nightmarish, mind-bending ways to encompass the whole of the town of Gideon Falls and, eventually, reality itself.

Gideon Falls is still ongoing for the moment (though it is scheduled to end once and for all late this December with the publication of its 27th issue), so we’ll all have to have to wait together to see how it turns out. Though with four trade paperback volumes out and the fifth scheduled for release on December 1, 2020, we won’t be waiting long. However it ends, you can be sure of two things: it’s going to melt your brain, and it’s going to shake you to your core. 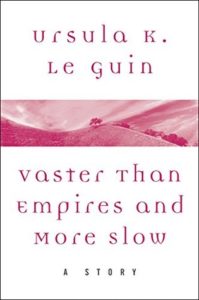 The crew of the starship Gum & World 4470 – “Vaster Than Empires and More Slow,” Ursula K LeGuin

While not necessarily a typical horror tale (LeGuin described it as “a traditional science fiction story”), the first time I read “Vaster Than Empires and More Slow,” I was floored by how absolutely damned unnerving the whole thing was. The story of a team of Surveyors traveling to document World 4470, a seemingly-uninhabited “dark green jewel” of a planet as they cope with their own litany of interpersonal problems and the brutish, unseen force attacking them from the shadows, “Vaster Than Empires…” doesn’t waste any time turning up the tension.

At the outset, the main source of the team’s strain is empath Osden, who is probably the worst fictional coworker in the history of human literature. Racist, sexist, bitter, narcissistic and needlessly cruel, Osden is just the absolute worst, his empathic abilities literally haunting his coworkers with bad moods and worse as the presence inhabiting the strange, overgrown world stalks them all. Discovering the true nature of World 4470’s “ghost” is half the fun of the story, but it’s also very much a workplace drama that explores how a malevolent presence—be it a ghost, a rancorous coworker, or something else entirely—can sour and rot almost anything it touches. But, of course, redemption isn’t always totally impossible. 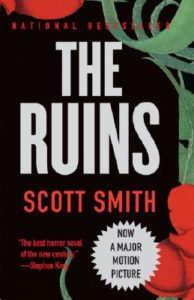 The jungle and the ruins – The Ruins, Scott Smith

There were about a million different places The Ruins could have gone wrong, but lucky for all of us, Smith sticks the landing with gusto. Suffused with dread and chlorophyll in equal measure, he wrings every available ounce of fear from the jungle our main characters find themselves trapped in. Even as the vines and stones begin to close around their throats (and legs, oh god, the legs), like good horror protagonists, they never stop trying to rid themselves of the curse they’ve foolishly blundered their way into.

While the evil lurking in the jungle may be supernatural in nature, or just a freak of evolution gone gruesomely wrong, what makes The Ruins a prime entry on this list is its merciless examination of the fear and reverence with which the people in the village just outside of its grasp treat it. They understand so much more than they let on from the outset, and like many strange literary settlements surrounding the uncanny and horrifying, they’re committed to holding the darkness at bay while refusing to succumb to it. Once the protagonists set foot beyond the bounds of safety, their fates are sealed, one way or another. 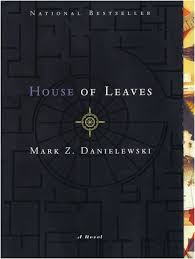 Alright, I know that this one is technically cheating a little bit, but I swear there’s a reason it makes the list: the House in House of Leaves isn’t a house at all. Like the Black Barn in Gideon Falls, the Navidson House is a sort of cosmic horror unto itself, a place where reality doesn’t just wear thin, it’s pulled into capellini and thrown by the fistful into a yawning, bottomless pit. The House is a monolith out of space and time, a haunted tear in the fabric of the universe that betrays physics, understanding, reality and all earthly reason.

Everyone who gets too close to the book’s twisting core narrative falls into the House’s inescapable gravity—the Navidsons, Johnny Truant, Zampanò, you, me, everyone, because the House both exists and doesn’t exist, it’s both fictional and real. It’s a carnivorous thoughtform, a place-as-tulpa, but it’s also a real building of brick and mortar and wood and blood and bone. It should be beyond us, and yet it seems so closely interested in what makes us tick. In the end, like the book itself, the House is just a mask that it—whatever it is—wears to trick you into coming inside. And once you’re in, you’re not getting out unless it decides to let you. 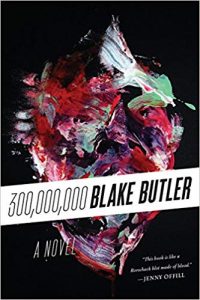 There are a number of astonishing, discomfiting things happening within the covers of Blake Butler’s 300,000,000. Ostensibly the story of a police detective by the name of E.N. Flood as he investigates monstrous serial killer Gretch Gravey and the cult of the lost and damned he’s built up around himself as he attempts to kill everyone in America (hence the book’s title). It’s not long before Gravey—or perhaps Gravey’s spirit—starts to infect Flood as people across the country die in unimaginably horrible ways and the narrative fractures and subdivides into beneath, and beneath, and beneath.

Flood soon gives way to the Cult, then to Gravey himself, and finally to the thing that drives Gravey. It’s like a set of Matryoshka dolls filled with nightmares: Flood is haunted by the Cult is haunted by Gravey is haunted by… well, something else (that goes by the name Darrel, naturally). Every new layer provides some new and unexpected atrocity, but even that setup soon balloons and warps itself into something else, making it impossible to get your hands on anything except for the truth lurking at the book’s scorch-black core:

The United States of America was always a haunted place. Flood/the Cult/Gravey/Darrel is just the latest incarnation of it.

Everything else is just blood. 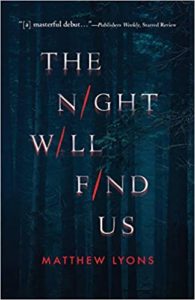 Matthew Lyons is the author of the novel The Night Will Find Us, as well as over three dozen short stories, appearing in the 2018 edition of Best American Short Stories (edited by Roxane Gay), Tor Nightfire's Come Join Us By The Fire (Season 2) and more. Born in Colorado, he lives in Denver with his wife and their cat. He can be found haunting Twitter and Instagram at @cannibalghosts. His latest book, A Black and Endless Sky, is now available from Keylight Books. 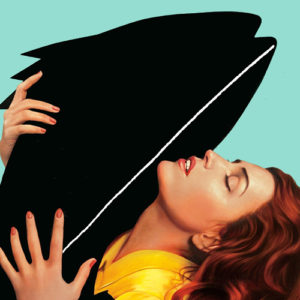 In a sense, every character is an imaginary friend. Whether you’re reading or writing, there they are, chatting away in your...
© LitHub
Back to top