My love for Raymond Chandler’s work has been tested over the years. On the one hand, it has grown through my career as an antiquarian bookseller, handling first editions of The Lady in the Lake, The Big Sleep, Farewell, My Lovely, and High Window. But as a rare book-dealing, Chandler-reading woman, I have a complicated relationship with those bookseller scenes in The Big Sleep.

The scenes appear early in the book, beginning with Philip Marlowe’s question for the woman at the front desk of A.G. Geiger’s bookstore:

She didn’t say: “Huh?” but she wanted to. She smiled bleakly. “A first edition?”

Marlowe then visits a second bookstore, and a different woman (played by the iconic Dorothy Malone in the film adaptation):

“Know anything about rare books?”

She pushed her yellow law book to one side and reached a fat volume up on the desk, leafed it through, found her page, and studied it. “Nobody would,” she said without looking up. “There isn’t one.”

Chandler’s private detective is always aware of the sexuality of the women he meets. But in a welcome development, here he respects a woman’s expertise, recognizing her for what she is: a professional. He even compliments how her mind works: “You’d make a good cop,” he says shortly after. Marlowe suspected the first woman was working a front. She didn’t know anything because she wasn’t actually a rare book dealer. But the second woman? She knew her shit.

I want to love this scene. I want to remember it with affection as a literary representation of women like me, women who have always worked in this male-dominated trade and have known their shit. Instead, the scene has been used against me so many times that it now represents the opposite. It has become a bludgeon.

I got my start in rare books on the Las Vegas Strip. I was hired by a well-known firm as one of the booksellers who would open their new gallery in the Palazzo, the ritzy companion hotel to the Venetian. In this environment, it’s no surprise that I heard countless questions from smirking men. Many approached me as if I were working in rare books only because I couldn’t get a job at the discount handbag store around the corner. “Do you like to read?” was a common question. More times than I care to count, a man laughed in surprise when he learned I was the manager.

Yes, it is always a man. I have never been asked the Ben-Hur question by a woman. Not once. It’s only the men who feel the need to test me—especially if it means demonstrating a bit of their own biblio-knowledge. Bonus points if they can claim it’s a joke or a reference. The Big Sleep Test accomplishes all these. Sometimes, it’s even used as an attempt to flirt. But it only bores me, this unoriginal remark from unoriginal men, hiding their intimidation behind condescension.

Yes, it is always a man. I have never been asked the Ben-Hur question by a woman. Not once. It’s only the men who feel the need to test me.”

In the book, Marlowe questioned the woman because she was simply the first line of defense in an operation that he suspected was a fraud. Dorothy Malone’s character is asked the same question later as a control group, in order to ensure the effectiveness of Marlowe’s methodology. But the gallery where I worked is owned by one of the most famous rare book firms in the nation. We regularly displayed Shakespeare Folios, incunabula, and other major landmarks, like a first edition of Origin of Species. Fly-by-night, this gallery is not. So why do these men feel the need to test me? What is our problem with woman as authority figures? Why is a woman in power questioned on sight?

The most common image of an antiquarian bookseller is an older white man, often wearing tweed and/or a bow tie. While many men of this profile thrive in this business (and many are lovely people), it seems to me a disservice to disguise our trade’s richness behind the simplicity of a stereotype. Chandler understands the value in prodding these kinds of assumptions. One of my favorite examples appears in The Long Goodbye: first, Chandler goes on for multiple paragraphs about different kinds of blondes. The descriptions are clever and charming, even while they clang dissonantly in their casual sexism. Then he describes the actual woman who brought on this tangent:

“[She] was none of these, not even of that kind world. She was unclassifiable, as remote and clear as mountain water, as elusive as its color.”

Suddenly it becomes evident: Chandler has been leading us all along. He makes fun of his own simplifications. He sees his own reliance on stereotypes, no matter how wittily phrased. Chandler tells us that real people cannot be simplified, not without doing them injustice. Which is why I can never take The Big Sleep Test too personally. When a man asks about the third edition of Ben-Hur, I simply smile and say, “There isn’t one.”

Rebecca Romney is a rare book dealer at Honey & Wax Booksellers, and co-author of Printer's Error: Irreverent Stories from Book History. She is perhaps best known for her evaluations of collectible books on the HISTORY Channel's hit show Pawn Stars. Romney is co-founder of the Honey & Wax Prize, an annual award for an outstanding book collection conceived and built by a young woman.
http://www.rebeccaromney.com 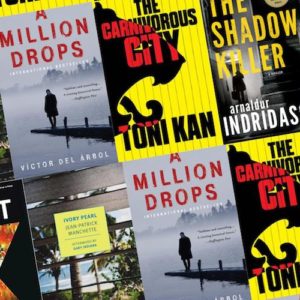 We're in the midst of the globalization of crime fiction. The cross-Atlantic currents have always been strong in crime and mystery,...
© LitHub
Back to top