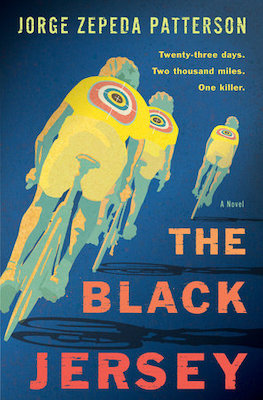 The following is an exclusive excerpt from The Black Jersey. Jorge Zepeda Patterson’s latest is a tale of corruption, murder, and cycling. When a series of incidents, culminating in murder, begin to fell competitors in the Tour de France, a cyclist is recruited by French police to be a man on the inside.

But Steve was doing okay. His chances of winning the Tour had actually improved in the past few days. He told me to come hang for a while and share one of those ridiculous energy drinks named after him, but I was exhausted and told him so, heading toward the elevator. I noticed his frustration. Post-race, we almost always got together to review our day and discuss the challenges we’d face next. When we didn’t hang out afterward, it was because Steve had something better to do: At the beginning of his career, women, and in the past few years, meetings with his agent, Benny, always accompanied by some new sponsor. But I’d decided today it was my turn to have something better to do, even if it was to just drop in bed.

He and I were the only ones on the team who had single rooms, thanks to a clause in his contract that generously extended to me. He followed me with his gaze for a few seconds when I turned to cross the lobby and then, as he did with everything that didn’t jibe with what he wanted, he erased me from his mind. He probably didn’t even notice I never made it to the elevators.

“Marc Moreau, could I have a few minutes of your time?”

The interruption sent my pulse racing in a way no steep hill or hours of pedaling on the road could do. And there was a reason: Nobody called me by my name. An elegant man now touched my arm as if he were gently trying to make sure I didn’t get away. He didn’t look like a reporter who’d snuck into the hotel. In fact, he looked exactly like the personification of a cyclist’s worst nightmares. His impeccable suit and neatly trimmed mustache were those of someone who worked for an institution, and given the present circumstances, that institution could only be the much-feared WADA, the World Anti-Doping Agency.

Although I was convinced my body was free of banned substances, I knew the urine tests we’d taken on previous days could register illegal substances absorbed involuntarily, or that we could be victims of lab errors. This wouldn’t be the first time somebody got kicked out of the competition because of a contaminated sample. I thought about Carlos Santamaría and I imagined my name in the headlines the next day.

“Excuse me?” I responded, defensive, and pulled my arm, trying to get distance from him.

“Could we talk in the lounge, Sergeant Moreau? I won’t take up too much of your time.”

During my short time in the army I’d never been promoted beyond corporal, but I wasn’t about to contradict him. There was a room just off the main lobby lit by a faint artificial fireplace, even though it was 82 degrees outside. The hotels along the route aren’t exactly bursting with luxury and comfort, never mind good taste.

I followed him to a secluded corner, feeling like I was walking into a trap. His reference to my military past aroused my curiosity but did nothing to ease my fears.

“Allow me to introduce myself: I’m Commissioner Favre.” As he spoke, he quickly showed me an ID, his gestures those of someone who had done this a thousand times before. “Needless to say,” he continued, leaning his head toward me. “I am an admirer of your athletic achievements.”

His flattering words and, even more so, his manner, which was a tad unctuous, helped my curiosity surpass my fear. He didn’t seem about to accuse me of doping, although he might still be interested in interrogating me about banned substances in circulation on the Tour. In fact, what he said next made me think that was his purpose.

“We need your cooperation, sergeant. Please, take a seat, make yourself comfortable.”

I sat down on the tiny couch and felt as comfortable as if I were in a dentist chair. The commissioner seemed intent on inflating my military rank. I thought if there was a problem, it might be better to be a sergeant instead of a corporal, so I accepted the promotion and went on the offensive. “I can’t help you with this issue. I keep myself away from everything and from anyone who has anything to do with that shit.”

“We’re not worried about that, but rather something much more dangerous.” He paused and brought his face closer to mine and practically whispered, “There’s a killer among you.” Then he sat up and took note of my reaction.

Article continues after advertisement
He paused and brought his face closer to mine and practically whispered, “There’s a killer among you.” Then he sat up and took note of my reaction.

I’m sure I disappointed him because I had none. The phrase was so absurd, my brain could find no way to process it. At least not immediately. In the light of the fake fireplace, I perceived the sheen of the wax on his fine mustache, sculpted atop thick wet lips. I thought it was the kind of thing some women might find seductive and others might find repulsive.

Disappointed by my silence, he began to explain as if he were reading a military report. “One: Hugo Lampar, the Australian and the best climber on the Rocca team, was beaten up two weeks ago as he rode alone on a practice course. There were no witnesses. He had multiple fractures and has no possibility of rejoining the Tour. Without his climber, Sergei Talancón’s chances are few, if not null. He’ll be unprotected and have to get used to someone else setting the tempo, which will disorient him.

“Two: Three days before the beginning of the competition, Michael Hankel was assaulted at dusk just a few steps from his hotel. Although he insists he didn’t resist and offered his wallet immediately, one of the thugs became angry over how little cash he was carrying, knocked him down with a single punch, and then stomped his ankle. It’s useless for the foreseeable future. He wasn’t considered a major contender, but his unexpected third place at Il Giro in Italy at only twenty-four had made many people in the press think that if there was going to be a surprise on the Tour this year, it would come from the German.

“Three: The Englishman Phil Cunninham ran the first stage far slower than expected, because he was pumped up on tamines. He was the only one who could challenge Steve Panata in the time trial. Cunninham finished three minutes too late, which meant he ceased being a threat for the rest of the Tour. The doctors can’t explain how he got sick. He ate the same things as the rest of the team and he has no allergies.

“Four: Just a few days ago, on the fifth stage, two fans stepped in front of the Movistar team, pretending they only wanted to wave at the camera on the motorcycle that runs in front of the squad. Óscar Cuadrado’s teammates barely got a chance to react. It was a massive collision. Four of the racers had to drop out of the competition and the Colombian lost half his team with most of the Tour still to come. The ‘fans’ that knocked him down were discovered to be some hooligans from Marseille with no known prior interest in cycling. They’re also hospitalized. We did get one revealing piece of information about them: One of them had recently deposited eight thousand euros in his bank account.”

“We did get one revealing piece of information about them: One of them had recently deposited eight thousand euros in his bank account.”

The commissioner paused again to see if I had grasped what he was telling me. None of those mishaps were new to me, although I hadn’t known the details until now. The Movistar incident was the most disturbing. With only half his team, Cuadrado had practically zero chance of winning, and that changed the odds for the Tour. If what the commissioner said was true, someone had altered the history of cycling.

And yet, I couldn’t buy into the idea of an attack against the tournament and, much less, that someone was physically assaulting the contenders. Every year the Tour lost a certain number of cyclists along its terrible journey, often in tragic circumstances.

“A mugging with mysterious circumstances and several accidents doesn’t necessarily mean there’s a conspiracy. In the ten years I’ve been racing on the Tour, I’ve seen plenty of stuff like this. Doesn’t it seem like a bit much to talk about a killer?”

“Well, I haven’t finished.” He licked his lips and took a long pause, almost enjoying the moment. “Two hours ago we found Saul Fleming floating in the bathtub in his room, his wrists slit. Whoever tried to make it look like suicide did a really sloppy job. That’s why we decided to talk to you.”

This time, the commissioner got the reaction he’d been looking for. My face must have reflected my shock as I imagined Saul drowning in his own blood. We’d never been close friends, but we’d had a profound respect for each other. Fleming was Peter Stark’s primary domestique, his wingman in the same way I was Steve’s. We’d gone through innumerable battles, wheel-to-wheel, defending our respective champions. Without talking about it, during the stretch up in the mountains, we’d developed our own competition within the overall race: Who would go further in protecting his leader? Knowing that the Englishman would never again challenge me on a slope made me shiver. Something had changed forever.

My second reaction was more reflexive although no less terrible. Without Fleming, Stark was lost. He was in fifth place, 16 seconds behind Steve, but until today he was confident he’d gain time on the mountain stages still to come. He was a better climber than my teammate. Without Fleming’s strong defense, he would need a miracle to pass Steve.

“Surely you understand why we need you, sergeant.”

“No, I don’t understand.” My brain was still stuck thinking about a bathtub too narrow to contain my rival’s long, lean arms.

“We’ve concluded the killer or killers belong to the circuit. They’ve struck with surgical precision to maximize their effect on the results of the race.”

“Anybody could have done that,” I protested. I found it hard to believe that a member of our closed community would attack one of our own. In spite of our rivalries, the peloton was a family, and that extended to the mechanics, the doctors, the massage therapists, the directors, and the coaches. Any cycling fan could point to a favorite racer and tell you his strengths and weaknesses, and I said as much to Favre.

From THE BLACK JERSEY. Used with the permission of the publisher, Random House. Copyright © 2019 by Jorge Zepeda Patterson. Translation copyright @2019 by Achy Obejas.

The Best Crime Books of the Year (So Far) 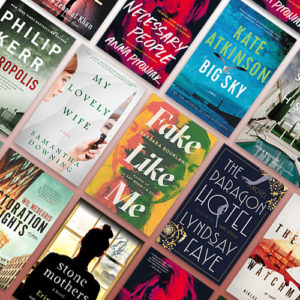 The Best Crime Books of the Year (So Far) The Summer Solstice has come and gone, which means it's time, dear readers, to make a quixotic attempt to distill the many...
© LitHub
Back to top