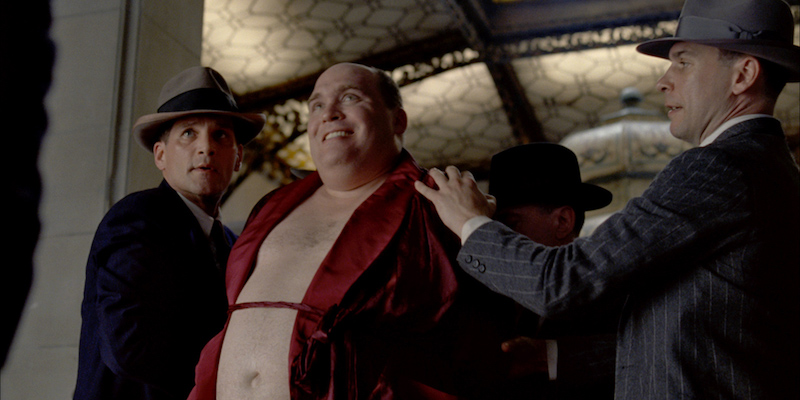 I usually get my ideas by perusing dusty archives and out-of-print books, but the idea for The Ghosts of Eden Park came through television—specifically the show “Boardwalk Empire,” which aired on HBO for five seasons. It was brilliant, and perfectly captured the dawn of the 1920s—that time when bootleggers were just beginning to plot ways to circumvent the Volstead Act, and no one had yet heard of Al Capone.

Fans of the show might recall a minor character named George Remus. He was savagely funny and quietly menacing. He was also brazenly odd, with a theatrical habit of speaking of himself in the third person (there’s a hilarious Abbott and Costello-esque exchange between Remus and a very perplexed Capone). He appeared onscreen sporadically, visiting with major bootleggers in Chicago and Atlantic City before retreating to Cincinnati, where he lived like a Roman god in a lavish mansion complete with a heated indoor pool, a personal masseuse, and a parlor populated by an army of porcelain statues. Remus stole every scene he was in. I wondered if he was a real person, and indeed he was—with a story far more fascinating and dramatic than the one portrayed on the show.

If there is one story that typifies the excesses, contradictions, ambition, and absurdities of the Jazz Age, it’s that of George Remus: teetotaling bootlegger, erudite madman, and, reportedly, a real-life inspiration for Jay Gatsby. Long before Capone became a household name, there was Remus, a lifelong teetotaler who used intellect rather than systematic violence to build his staggering empire. An impoverished German immigrant abused by his alcoholic father, Remus quit school at age fourteen to work in an uncle’s Chicago pharmacy, sleeping on a cot in the stock room for months at a time, too scared to go home. Within a few years he owned his own pharmacy, but his ambitions stretched far beyond dispensing “Remus’s Cathartic Pills.” He attended law school at night, became a lawyer, and, in 1920, at the dawn of Prohibition, used his pharmaceutical and legal backgrounds to exploit a loophole in the law. With a physician’s prescription, it was legal to buy and use liquor for “medicinal purposes”—a provision he deemed, in a customary flourish of language, “the greatest comedy, the greatest perversion of justice, that I have ever known of in any civilized country in the world.”

If there is one story that typifies the excesses, contradictions, ambition, and absurdities of the Jazz Age, it’s that of George Remus: teetotaling bootlegger, erudite madman, and, reportedly, a real-life inspiration for Jay Gatsby.

Within a year Remus owned 35 percent of all the liquor in the United States. Newspapers estimated his fortune to be about $30 million—a figure not adjusted for inflation. “Remus was in the whiskey business,” he said, “and Remus was the biggest man in the business. Cincinnati was the American mecca for good liquor, and America had to come to Remus to get it.” He and his glamorous second wife, Imogene, hosted opulent parties in their Cincinnati mansion, including a 1921 New Year’s Eve bash where party favors included diamond stick pins for the men, brand new cars for the women, and $1,000 bills stashed under everyone’s plate. In a gesture that would be recalled with awe decades later, Remus lit guests’ cigars with $100 bills.

Remus depended on Imogene in both business and social pursuits. He fell for her when, as a struggling mother, she worked as a “dust girl” in his law office. Soon, they had divorced their respective spouses, and together put in motion his dream of becoming the most successful bootlegger in American history. Remus sought Imogene’s advice on bootlegging deals and confided in her about trials and triumphs. He gave her creative nicknames: His Little Imo, his truest and sweetest, his Prime Minister, his centipede, his monkey, his gem, the apple of his eye—“not one, but both.” In Remus’s words, he “took her from a hovel” and created her, as deftly as he’d created himself. In 1924, when he was arrested for violating the Volstead Act, Imogene consoled him. “Never mind,” she said. “When this is all over, we’ll go away somewhere together and forget the disgrace.”

Remus’s empire came to a strange and unexpected end—not from serving a stint in the Atlanta federal penitentiary, but because Imogene fell in love with the very Prohibition agent who put him behind bars.

Boardwalk Empire also featured a character named Esther Randolph, a swaggering, fearless lawyer who was appointed by President Warren Harding to be the assistant attorney general of the United States. She, too, was based on a real person: Mabel Walker Willebrandt, who in the 1920s was not only the most powerful women in America (and one of the most powerful Americans, period) but also the most famous, excepting silent film stars like Clara Bow.

Willebrandt arrived in Washington in September 1921, only nine months after American women achieved suffrage. She was 32 years old, five years out of law school, and had never prosecuted a single criminal case. To heighten the pressure, she was nearly deaf, and spent an hour each morning arranging her hair to conceal her hearing aids. To her bosses at the Department of Justice—many of whom took hefty bribes from Remus and other bootleggers—she was the perfect choice, an inexperienced figurehead who would be too overwhelmed to threaten their illicit deals. Willebrandt, however, surprised them all. Steely and relentless, she was nobody’s puppet.

Yet even the stoic, fiercely proud Willebrandt admitted the job was harder than she’d expected. She endured endless fixation on her appearance, long, florid descriptions of her clothing (“dainty and exquisite dresses”), figure (“a suggestion of plumpness”), and the shape of her eyes (“perfectly wonderful”). She loathed this “girlie girlie stuff,” as she called it, and tried to strike a balance: not too masculine or too feminine, too aggressive or too agreeable; too much or too little of any quality that would highlight her sex instead of her work. In an article for The Smart Set, titled “Give Women a Fighting Chance,” she vented her frustration:

A boy must do the job well, and develop personality.

A girl must do the job well and develop personality. PLUS—

Break down skepticism about her ability.

Walk the tight-rope of sexlessness without loss of her essential charm.

Keep up an impersonal fight against constant efforts to sidetrack her.

Devote extra work and thought to making an opportunity out of every little opening.

Make the hard choice between giving up children and home life in order to advance, or having them in the face of increased prejudice.

And lastly, maintain a cheerful and normal outlook on life and its adjustments in spite of her handicaps.

Willebrandt struggled, too, with the logistics of her task: America’s long, craggy borders and 18,000 miles of porous coastline. There were so many inventive ways of smuggling booze. A double-amputee war veteran boasted that he could carry 36 pints in his artificial arm and leg. Women hid pints inside of false rubber breasts. A raid on a soda parlor in Helena, Montana yielded squirt guns with a two-drink capacity. Liquor-filled torpedoes landed on Long Island, specialized “liquor submarines” raised and lowered out of sight, and seagoing tugs with special compartments hid enough liquor for thirty New Year’s Eve parties.

There was also a dearth of honest Prohibition agents. Qualifications were lax, and many applicants were former cops, bailiffs, and other courtroom gadflies. Even criminal records were of no consequence. The starting salary was $1,200, barely a living wage in many cities, and agents could make far more collecting bribes from George Remus. “The dominant reality,” Willebrandt wrote, “is that the whole problem is one of getting the right men in places of power in enforcement—men of creative thought, of courage, those not slaves to political ambition. And by men I mean also women—lots of them.”

When a Cincinnati-based federal prosecutor alerted Willebrandt to Remus’s operation, she called upon 30-year-old Special Agent Franklin Dodge. In addition to sleek dark hair and a deeply cleft chin, Dodge possessed a distinguished pedigree: His father, Franklin L. Dodge Sr., was a prominent Democrat in Michigan, with connections throughout the state and federal government. Dodge Jr. became a special deputy for the U.S. Marshal Service in 1917, his first federal post. In June of that year, two months after the United States declared war on Germany, Dodge conducted a census of Lansing’s “alien enemies,” determining that approximately seventy people of German descent lived in the community.

As a special agent with the Bureau of Investigation, Dodge was considered a rising star. The Remus whiskey ring would be both Willebrandt’s and Dodge’s first foray into Prohibition, and she hoped the agent would not disappoint.

She dispatched Dodge to Cincinnati, and in doing so fomented an untenable and deadly situation, one that would haunt her long after the conclusion of this case. The love triangle between Remus, Imogene, and Dodge sparked a feud that reached the highest levels of government—and a sensational trial with a conclusion as outrageous as the Jazz Age itself. 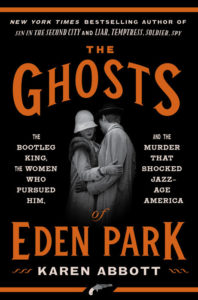 Karen Abbott is the New York Times bestselling author of Sin in the Second City, American Rose, Liar, Temptress, Soldier, Spy, and most recently, The Ghosts of Eden Park. A native of Philadelphia, she now lives in New York City.

The Deeply Unsettling Noir of Dorothy B. Hughes 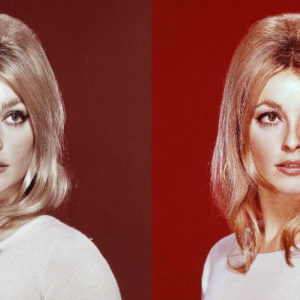 “Perhaps I will write the book about my trip to China before I go”—this is how Susan Sontag concludes her essay “Project...
© LitHub
Back to top