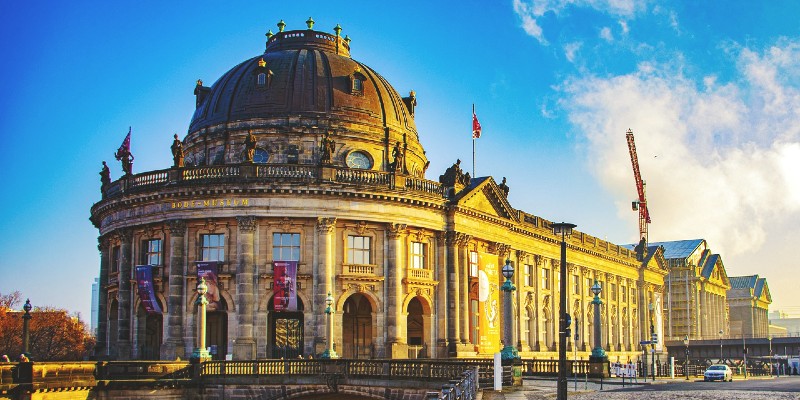 A museum theft that was itself a work of minimalist art

On Mondays, the Bode Museum in Berlin is closed, but that didn’t stop three visitors. They weren’t looking for the main visitors’ entrance. On March 27, 2017, at exactly three o’clock in the morning, they climbed the steps to the entrance of the nearby Hackescher Markt train station, all three dressed in black, with hoods pulled over their faces to conceal them from the surveillance cameras, but as if already weighed down by guilt. One of the figures kept putting his hand in front of his face. On the video, the hand looks very white, probably clad in gloves. During the week, there aren’t any trains so early in the morning. The station platform was empty, and the men strode determinedly toward its end. One of them, carrying a black backpack, had an unusual gait. A limp? Some physical tick? Or was something concealed in the leg of his trousers? 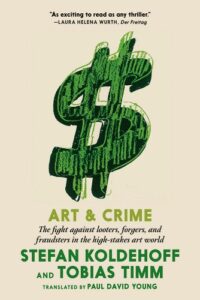 The men jumped from the train platform onto the tracks and walked along them across the Spree River to the Museum Island. There, where the tracks lead between the monumental buildings of the Pergamon Museum and the Bode Museum, was a strange extension. It was the remains of a bridge that once had risen above the train tracks and connected the Bode Museum with the Pergamon Museum. The bridge itself hadn’t existed for a long time. It appears in historical photographs. But the three utilized the remains as a bridgehead: with the help of a ladder, they were able to reach a window in the Bode Museum. If they had shouted a loud hello, the police at Angela Merkel’s nearby private home would have been able to return the friendly greeting.

The three men weren’t visiting for the first time. They knew exactly where they wanted to go. Ten days earlier, two had conducted surveillance on this way into the museum, and six days earlier, three people returned to survey, according to camera footage from the nearby train station. On the second visit, in the early morning hours of March 21, 2017, the culprits had already climbed up to the window and tried to remove a heavy piece of security glass that had been installed in 2005. They destroyed one of the bolts securing the glass, which was dislodged but held on by the remaining bolts. This part of the museum exterior had not been under video surveillance for some time.

The object of their endeavors can probably be traced to a tip they got, possibly from a man who had been working at the Bode Museum for a few weeks as a watchman in the employ of a subcontractor. Somehow, they learned about this fabulous treasure: a coin, almost as big as a car tire, weighing 220 pounds, made of the purest gold in the world. Purity: 999.99/1000.

A COIN MADE OF SOFT GOLD

“Big Maple Leaf ” is the name of the coin. The Royal Canadian Mint hadn’t exactly minted the coin, which would have been technically impossible, but rather, milled it. Only six of them were made, and two of the giant gold coins were sold on the open market. One copy is still in the possession of the Royal Canadian Mint, which is very proud to have been able to produce so large a coin of such purity. The gold is so fine and soft that it is unsuitable for making jewelry. Gold of this purity is principally used for the production of highly sensitive technology, such as for space travel.

The Berlin Big Maple Leaf was exhibited on the third floor, in a vitrine of bulletproof glass, on loan from a real-estate mogul in Düsseldorf. The man had bought the coin at auction in Vienna; there was only one bid. It was brought to the Bode Museum in Berlin for a special exhibition of the museum’s coin collection, after it had first been displayed in the Kunsthistorisches Museum in Vienna. At the end of March 2017, the value of the raw material in it was itself about €4 million. Theoretically, one could also use the coin as payment in Canada, heaving it onto the counter at the cashier: the nominal value was one million Canadian dollars, a fraction of its actual worth.

The director of the coin collection said later that the museum had wanted to use the giant coin to attract the part of the public who weren’t regular visitors to the museum. His wish was fulfilled in unexpected ways.

WITH AN AX AND A ROLLER BOARD

On that early morning in March, the three men opened the window in the facade above the bridgehead. The window led to a changing room for male employees, in which the presumed tipster had a locker. The alarm remained silent because it was the only window that was not connected to the external security system. The thieves cut through the remaining bolts that held the security glass on the window that they had earlier dislodged.

At the precise time of the break-in, the night watchman made his rounds through the museum. Every two to three hours, he was supposed to walk through the museum, during which time the interior alarm system—the motion detectors and the sensors on the doors—were deactivated. For anyone watching the museum from the outside, the moment of deactivation would be made visible by the so-called guard light: dim lights that illuminate the museum from inside. It is possible that the burglars waited for these lights to go on before entering. Or they listened in on the radio, as the guard announced at 3:20 a.m. that he was about to make his rounds.

The guard, sixty-one years old, toured the lower levels. He testified later that he suspected nothing and heard nothing concerning the visitors on the third floor who raced through the corridors—past historical art treasures, a marble Bacchus, paintings of Friedrich the Great in the guise of a Greek hero—until they reached the room that held the gigantic coin. They could simply open the doors of the room in the direction of the coin because they were outfitted with a so-called panic function in case of fire. They would have needed a key for the way back, or they could have blocked the doors with plastic wedges.

In the middle of Room 243 stood the object that they sought. With a Tomahawk-brand ax they hacked away at the vitrine—with so much force that they broke not only the ten-millimeter-thick security glass but also the fiberglass-reinforced handle of the ax. (In the Green Vault in Dresden two years later, thieves also utilized an ax.)

When the loaned coin was installed in the museum in 2010, it took four workers to carry it on a stretcher. The vitrine was protected by security glass but without an alarm. The weight of the coin itself was supposed to prevent theft. The culprits were strong enough: they heaved the coin onto a dolly, a simple board with wheels, and pushed it through the hallways back to the window through which they had climbed into the museum. They left traces of their heavy load everywhere, crashing into walls and doorways.

When the guard went to reactivate the alarm at four a.m. sharp following his rounds, the system reported an error. Some doors on the third floor appeared not to be properly closed. The guard, who had just been assigned to the Bode Museum and previously had served at other places in the museum collective Stiftung Preußischer Kulturbesitz, called into the central security office, and when he went on another round through the museum, he discovered the plastic wedges block-ing the doors. At 4:33 a.m., two additional guards arrived to help, and together they searched the building. One of them at last saw the smashed vitrine. It wasn’t until 5:28 a.m. that an emergency call notified the police, who arrived at the crime scene minutes later.

The police suspected that the culprits might still be inside the museum; additional units were called in to search the entire building. Only when one of the policemen who entered first read the text on the smashed vitrine, which emphasized the weight of the coin, did the magnitude of the theft become clear. The police discovered the broken window in the changing room. Of course, the thieves had long since escaped. From the window, the coin was dropped into a wheelbarrow on the train tracks—the police found traces of gold—and transported in the direction of the Hackescher Markt station. Later, a train conductor reported that he had noticed the wheelbarrow on the track bed a few days before the break-in.

As investigators reconstructed the crime, the thieves steered clear of the station platform on their return trip. They threw the coin off the track just before they got to the station, dropping it into the Monbijou Park, which lay below. Traces of gold were also found there. The burglars used a rope to descend, probably the same rope employed earlier to raise the wheelbarrow and the other heavy equipment up onto the tracks. At 3:52 a.m., the surveillance camera at a nearby construction site shows a car driving away on the pedestrian walkway along the Spree River; the driver kept his headlights off. Because of the distance, further details cannot be seen. There were no eyewitnesses and no other video cameras. Even the bloodhounds that were brought in couldn’t find a scent.

A CRIMINAL ACT BY A PHILISTINE?

It was one of the most attention-getting museum thefts in all of criminal history, a case reported in television news across the entire world and in newspapers including the New York Times. So where is the coin? And who stole it?

One could call the criminals a bunch of philistines because, to the great good fortune of the art world, they left the important cultural holdings of the Bode collection, such as the statue of Luke the Evangelist that Tilman Riemenschneider carved in wood, or the baroque satyr with a panther that Pietro Bernini chiseled in marble, and the dancer by Antonio Canova. Instead, they wanted the gigantic coin, something straight out of Scrooge McDuck’s cartoon dreams. A toy for very rich show-offs.

The coin may not have been the most valuable object in the museum, but the thieves’ choice wasn’t exactly stupid either. Gold can be turned into money much more easily than a one-of-a-kind historical art relic, whose origin is known to experts and can be entered into search lists and databanks. Unlike a famous painting, a gold coin has only to be sawed through and melted down into easily transferrable bars.

Art was not the object of the crime in this case. The museum just happened to be the place where an especially large lump of gold was housed. If one wanted to call it an art crime, then perhaps it’s possible to do so because of the simplicity of the theft. The crime itself seems like a work of minimalist art.

Not only had the burglars made a lot of money very quickly, they also became instantly famous. They were sung about in rap videos and celebrated on the streets of Berlin. Rumors flew through the internet about who could have been involved in the break-in. And the state criminal investigators began the chase.

Excerpted from Art & Crime: The Fight Against Looters, Forgers, and Fraudsters in the High-Stakes Art World, by Stefan Koldehoff and Tobias Timm. Translated by Paul David Young. Published by Seven Stories Press. Reprinted with permission. All rights reserved. 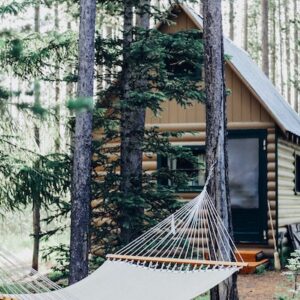 My husband and I were little more than a handful of hours into a fourteen-hour drive …  our destination? Bonnaroo Music...
© LitHub
Back to top