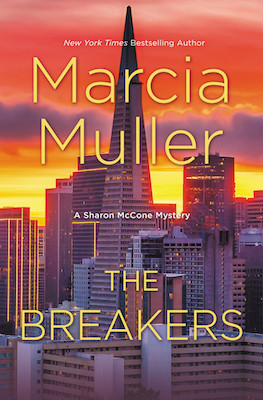 The following is an exclusive excerpt from The Breakers, by Marcia Muller, the latest in Muller’s long-running Sharon McCone series. In the following passage, we follow McCone on the trail of a missing girl and her bad-news boyfriend.

Danny’s Inferno was located on a commercial block of Noriega Street between Forty-Fifth and Forty-Sixth Avenues: small hardware store, secondhand clothing boutique, ice cream shop, pizza place. I wondered if the proprietor of Danny’s had taken inspiration for its name from a neighbor, the Devil’s Teeth Baking Company.

Inside, the Inferno carried out its hellish theme: glowing red  fluorescent tubing shaped like a devil; orange neon flames flaring above the bar; Beelzebub masks on the walls. Interspersed were occult symbols: the sun cross, celebrating the paganism of the Iron Age; pentacles, prominent in European witchcraft; the hex signs that carry on even today. Odd place.

I took a stool at the bar. I’d drawn stares from a few of the customers and a waitress when I’d come in, but the barkeep seemed friendly. He looked somewhat like my image of Satan: wild black hair, thin, waxed mustache, spade-shaped patch of hair on his chin. He wore a red sequined vest over a black shirt.

I said, “Is that your work uniform or do you always wear it?”

He laughed, startling a couple seated two stools away. “Do I look like the kind of guy who gets off on people thinking he’s Satan?”

“I change into my human clothes before I leave work.” He reached across the bar to shake my hand. “Danny Redfin.”

“Yours.” He bustled along the bar, brought it back. “So what brings you to this lowly place?” he asked.

“So what brings you to this lowly place?” he asked.

He raised his eyebrows. “What on earth you want with him?”

I set one of my cards in front of him. He looked at it, then tucked it carefully in the pocket of his red vest.

“I’ve heard of you,” he said. “Actually, we have a mutual friend—Hank Zahn. He’s my lawyer.”

“And one of my best and oldest friends. We go all the way back to college.”

“Uh-huh. That’s why I like it.” And sometimes why I don’t like it when trying to go about my business. “So what about Tyler Pincus?”

“He hangs here sometimes.” Redfin scanned the few customers. “He hasn’t been in today, though.”

“Obnoxious. Always tries to be the center of attention, which is hard because nobody likes him.”

“Nothing. He pretends to be a magician, but he’s actually a trust fund baby.”

“He pretends to be a magician, but he’s actually a trust fund baby.”

A trust fund baby living in a place like the Breakers. No accounting for tastes.

Danny said, “Yeah, I know what you’re thinking. It’s probably not a big trust fund—if it exists at all.”

“You know where I can get hold of Pincus?”

“No, but I can take your cell number, call if he comes in.”

“It’s on my card. Another question: does Zack Kaplan ever come here?”

“Not too often. He’s a hardworking student. But I know him. A good dude. So what’s this about?” Redfin asked. “If it’s not confidential.”

“It isn’t. The more people who hear about it the better. You know Chelle Curley?”

“Sure. She stops in sometimes.”

“I hope she’s all right. A good kid, you know, got a lot of smarts. I could help you—ask around about her.”

I outlined the missing person case for him.

He shook his head. “I hope she’s all right. A good kid, you know, got a lot of smarts. I could help you—ask around about her.”

“I’d appreciate that. There’s a guy named Damon she used to be with. Do you know his last name? Or where he lives?”

“What about two construction guys she hired to work on the Breakers? Al Majewski and Ollie Morse?”

“They come in pretty regular, probably they’ll be here tonight.”

“Let me know if they do. Now, what about this Damon? What’s he like?”

“You want the good or the bad first?” I shrugged, and Redfin went on.

“But you look deep in his eyes and you know that if he weren’t being patted and given treats, if he weren’t secure on a leash, he’d jump on you and rip your throat out.”

“He’s a sharp-looking dude. Tall, dark curly hair, chiseled features. Personable too. Nice smile, firm handshake. That’s the good side. Now for the bad: there’s this thing about him, sorta like a big dog on a leash. He’s behaving, friendly. He likes being patted and given treats. But you look deep in his eyes and you know that if he weren’t being patted and given treats, if he weren’t secure on a leash, he’d jump on you and rip your throat out. That’s Damon in a nutshell.”

“What else is bad about him?”

“He doesn’t really like women, particularly successful, assertive women. He beat up one of my customers pretty badly last year.”

I felt a stab of anxiety. “Chelle—”

“No. At least not at first. But I think he may have gotten rough with her—she had bruises on her arms the day before she fired him. But she gave better than she got: I saw him on the street with his backpack crammed with all his stuff, and he had one beautiful shiner.” Redfin shook his head. “Why is it always the good ones like Chelle who get the short end of the stick? People who are trying to make a difference— and not just for themselves, but for others too? Why do bad things always happen to them?”

His questions bothered me; I had no answer for them. And I felt as though he’d  closed the book on Chelle, ex- pected never to see her again. Happens a lot with runaways in this city, and we tend to downplay it. But when it happens to one of your own . . .

The fog had moved in, so heavy that it felt almost like drizzly rain. In August, the interior of the Bay Area can heat up to triple-digit temperatures; people would be sweltering in places like Walnut Creek, Danville, and the great agricul- tural valleys. But here I had to put up the hood on my rain jacket.

From THE BREAKERS.  Used with the permission of the publisher, Grand Central Publishing. Copyright © 2018 by Marcia Muller. 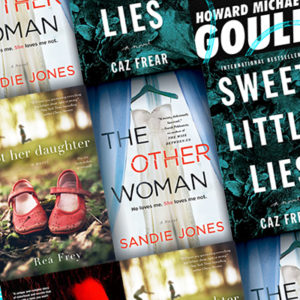 5 Debut Crime Novels to Read This August Breaking into the crime game isn’t easy, but every month, a few brave and talented souls make a go of the mystery racket....
© LitHub
Back to top