The Cabin At The End of the World 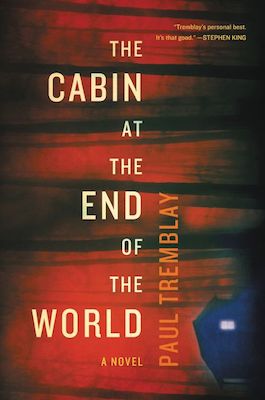 The following is an exclusive excerpt from The Cabin at the End of the World, by Paul Tremblay, a new work of psychological suspense from the Bram Stoker Award-winning author of A Head Full of Ghosts. In the following passage, a young girl and her dads try to figure out what's going on when a doomsday cult arrives at their cabin in the woods.

She doesn’t answer any more questions until after she herds her confused, concerned dads inside the cabin. With the slider shut behind them, she places a sawed-off hockey stick in the frame so the glass door can’t glide over the track even if the lock isn’t latched. Daddy Andrew showed her how to do that last night before she went to bed.

She pushes her dads out of the kitchen and toward the locked front door. The common area, which is a living room space and kitchen, takes up almost the entirety of the cabin’s interior. The walls are made of unstained wooden planks. Wen has already walked around most of the room, knocking and testing for loose ones. A map of the lake and forest, a framed mountain landscape at dusk, and a plaque with hand-carved loons hang haphazardly on the walls along with what look to be antique skis and poles and old baking soda and Moxie advertisements stamped onto sheets of tin, the kind of kitsch one can find at any general store in New Hampshire. A small sliver of a bathroom with the world’s skinniest shower stall is to the kitchen’s left. The showerhead leaks water more than it actually showers. Across from the back slider and to the right of the front door are the two rectangular bedrooms. Wen’s room has bunk beds, the frame built into the walls. Wen has slept in both beds already and has decided she prefers the bottom bunk. To the right of the two bedrooms is the open mouth of a stairwell that spirals down into the basement. A short, thigh-high wrought-iron fence rings the perimeter of the stairwell landing. She pushes her dads out of the kitchen and toward the locked front door. Next to that and up against the back wall are a stone-and-mortar fireplace and chimney. Squatting on the hearth is a wood burning stove, a small stack of firewood, and a rack of black pewter stove tools: mini shovel, brush, tongs, and a poker. A long, army-green couch, the upholstery as prickly as a cactus, cuts a diagonal claim through the common area. Offset to its left is the puffy blue love seat paired with a spindly-legged end table ready to topple at the slightest nudge. A small lamp with a bright yellow lampshade rests on the end table like a toadstool. To the left of the love seat and almost in the small kitchen is a rectangular table, an abandoned game of solitaire spread out on its top. A dusty and cobweb-tinseled wagon wheel turned folksy chandelier hangs from the vaulted ceiling and between two wooden beams wide enough to be footbridges. On the wall to their right and directly across from the front door are a window and a flat-screen television. The only modern appliance in the cabin (the refrigerator and stove have to be older than both Andrew and Eric), the television is tethered to a satellite dish, a lonely lump of plastic stationed on the roof. The flat-screen is so out of place as to be anachronistic. It seems impossible that it functions as intended and is less an accoutrement than it is a blackened window, forever night beyond its glass with its sash permanently nailed shut.

Their progress through the common room is slow and spasmodic. Andrew and Eric continue to unleash a torrent of questions and pleas for Wen to respond. She tries to keep a tally in her head but they are talking too fast and she can’t possibly keep up, and even if she could, she’d be attempting to answer their questions for days and days.

Wen tries her best, anyway. She speaks in clear and clipped sentences.

“I don’t know who they are. Go look out the windows. He says they want to talk. There are four of them.

The big one is named Leonard.

He is very nice but started saying weird things. He said we have to help save the world.

He is very nice but started saying weird things. He said we have to help save the world.

There isn’t any car.

I think they walked here.

They’re all sort of dressed the same.

Jeans and same kind of shirts but different colors. I don’t know.

They didn’t say anything to me. Only Leonard.

He said we had to choose something. It sounded like something bad.

The others are carrying big and scary-looking tools. Like scythes but not scythes.

Her dads want to know more about the scary-looking tools. Wen hears her own words as a dull hum coming from some far-away place, as though she’s outside of herself but not inside the cabin, and she’s confused and thinking maybe she imagined their questions and imagined coming to get them and instead she’s still standing out on the front lawn, frozen in place, spotlighted by the sun, and the strangers with the awful things they carry are there and walking toward her.

From The Cabin at the End of the World. Used with the permission of the publisher, William Morrow. Copyright © 2018 by Paul Tremblay. 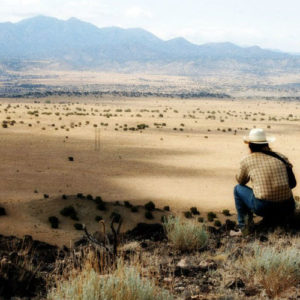 Borderlands Noir In a world where the twists and turns of politicking are shaped by arbitrary straight lines on a map, those in the heartland...
© LitHub
Back to top