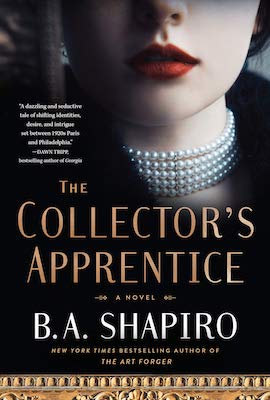 The following is an exclusive excerpt from The Collector’s Apprentice, by B. A. Shapiro, who has made her career crafting sensuous, erudite art mysteries, concerned with forgers, art thieves, and eccentric collectors. In the following passage, we meet a young woman about to be drawn into a clever scheme by a con artist.

Paulien was so engrossed in her work that she never heard him approach and only slowly became aware that someone was standing behind her. It was late spring, one of the first days without rain, and she’d set up her easel at the edge of a wood not far from campus. When she turned, he was staring at the painting, seemingly oblivious to her.

“I like what happens with the yellow here.” He pointed to the top left of the canvas. “How it leads the eye to the yellow below without actually telling it to go there.”

She was put off by the fine cut of his jacket, the gold glittering on his watch, and the confidence of his pose, not to mention the inappropriateness of his approaching her. A dandy pretending to be interested in art when he was only interested in flirting with her. She returned to her painting and tried to pretend he wasn’t there. Although she had to admit she appreciated his comment on the yellow brushstrokes—and that he was very handsome. Exceptionally handsome.

But he didn’t leave, just stayed behind her left shoulder, watching her paint.

Because she wasn’t very good, she didn’t like to be observed. Especially this closely. “Don’t you have someplace else to be?” She knew it was rude, and that her mother would admonish her for speaking like that to such an attractive and apparently wealthy young man, but he unnerved her.

“Not when I can stand here and watch you work such wonders.”

“I don’t mean to bother you, but I’m drawn by the process of creating something out of nothing.”

Paulien gave an exaggerated sigh, put down her brush, and twisted around. “Are you an artist?” she asked, although she doubted he was. No artist walked around in clothes like that.

A dandy pretending to be interested in art when he was only interested in flirting with her. She returned to her painting and tried to pretend he wasn’t there.

He removed his hat and bowed slightly. His eyes, like warm pools of chocolate, were playful; matching dimples cut his cheeks. “George Everard,” he said in a resonant baritone. “Man of no talent.” Despite the arrogance that allowed him to presume he could interrupt her, she felt the tug of him. She stood and dropped into a mock curtsy. “Paulien Mertens, girl of not all that much.”

“I heartily disagree with your opinion, but I’m charmed to make your acquaintance, Paulien Mertens.” Then he put his hat back on his head and walked away.

She watched him go, surprisingly disappointed by his leave-taking. She shook off the feeling and returned to her work. She didn’t think about him again until about two weeks later when he strolled into the Princess Louise on High Holborn, where she was having a glass of sherry with two classmates from the Slade.

The girls often met there because it was in central London, close to the British Museum and Paulien’s flat. It was also a beautiful place, with deep wood paneling and a ring of booths—where either single women or couples could be comfortable—circling a bar at which only men were allowed. And the food wasn’t half-bad.

She recognized him immediately; he was difficult to forget, with his strong cleft chin and the clump of dark hair that lazily fell to his forehead.

Not to mention those dimples. His suit was just as fine as it had been that day in the woods, but it was less formal and lent him an air of the urbane rather than the overly proper. She quickly ducked her head so that her long hair covered her face.

She waited for him to come over, but there was no tap on her shoulder, no friendly cry of recognition in that sultry voice she remembered.

She raised her head and surreptitiously watched him. He was sitting at the bar talking animatedly with another man, unaware of her. And she didn’t want him to be unaware of her. She flushed at the thought and lit a cigarette.

“Why are you all red?” her friend Lannie asked. She followed Paulien’s eyes to the bar. “Oh là là!” she cried. “Who is that dashing fellow?”

“I have no idea,” Paulien said primly, coloring even more deeply.

Lannie elbowed their friend Bernice and shrieked at Paulien, “You’re a damn liar, you are!”

“I thought you didn’t know him,” Lannie teased.

Bernice rested her chin on her fists. “Wish I knew someone as dreamy as that. Think he has a friend for me?”

“I’ve no idea who his friends are—or who he is,” Paulien said, then corrected herself. “Well, I did meet him once, very briefly. I don’t even remember his name,” she lied. “And I’m sure he doesn’t remember mine.”

But Paulien pulled her down instead. “No,” she said, more sharply than she intended.

Lannie held Paulien’s gaze, and when Paulien dropped her eyes, Lannie laughed softly, but with affection. “Have it your way, Paulie. Although I’m guessing what you really want is to go straight to that bar.” Paulien acknowledged the truth of her friend’s remark with a twisted smile, but when she looked back at the bar, George was gone.

She began dropping into the Princess Louise more frequently, becoming almost a regular despite the fact that she wasn’t all that fond of sherry. But George didn’t return. At night, she dreamed about him; sometimes he chased her and sometimes it was the other way around, but either way, no one was ever caught.

When she woke from one of these dreams, a deep longing consumed her, frightening her, and she had a hard time falling back asleep. It was ridiculous, she knew, there were other boys who sought her attentions, but they all seemed terribly young and unmannered.

And then one day he was there. She was by herself, waiting for Lannie and two other classmates to join her for dinner, filling the time by sketching the bar, which was as ornate as the nave of a grand church.

“Still creating something out of nothing, I see.”

She sat completely still, savoring the inevitability of the moment.

Then she lowered her sketchbook and pencil to the table and raised her eyes. “Hello, George Everard.”

“I’ve been looking for you, Paulien Mertens.”

Suddenly confident in the rightness of the world, she said, “And now you’ve found me.”

Lisbon is a very agreeable city, and he wonders why he never thought to come here before. Not as dirty as Paris or London, much less frenetic. Safer. He’s sitting on the terrace of an elegant hotel, overlooking the harbor, enjoying the breezes and the pretty women. Granted, the skirts here aren’t as short as they are in Paris, but they’re short enough. He thinks of the suitcases full of cash in his room upstairs and smiles.

Everard Sureties was his biggest con yet. So simple, really.

He’ll be boarding his ship in the morning. Heading back to the good old US of A. New York City this time. Another financial scam, but with a different tenor. He has it all worked out. In fact, he’s already slipped into his new persona, Benjamin F. Talcott, American magnate. Needless to say, he isn’t Benjamin Talcott, any more than he was George Everard. Nor is he British, as he’s claimed for the past five years. He shifts in and out of identities and nationalities as easily as another man might shed a business suit for the weekend. One of his talents. Of which he has many.

Everard Sureties was his biggest con yet. So simple, really. Buying international reply coupons in Italy, where the exchange rate is low, and cashing them in England, where the exchange rate is high. Too small a return for an ordinary man who thought small. But no one could accuse him of thinking small. Or being ordinary. He saw the potential, enticed investors who were so enamored of their paper returns that they never cashed out and then encouraged their friends to invest. The newcomers feeding in from the bottom, he taking it all off the top. Child’s play.

Marks are everywhere, and they have only themselves to blame when disaster befalls them. Maybe he’ll find another comely, rich girl like Paulien Mertens to help with Talcott Reserves. Too bad she didn’t want to leave with him. Such a live wire. Smart and sexy and good in bed, if naive. From her reaction to him in Paris, still crazy in love with him, if a little angry at the moment.

From THE COLLECTOR’S APPRENTICE. Used with the permission of the publisher, ALGONQUIN BOOKS. Copyright © 2018 by B. A. Shapiro.

The Art of the Feminist Thriller

Adding to the Espionage Canon 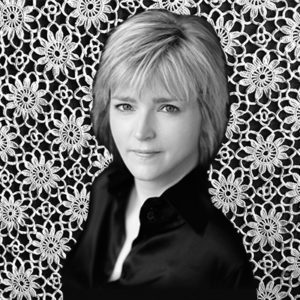 The Art of the Feminist Thriller Karin Slaughter has been writing smart, action-packed thrillers and procedurals for nearly two decades, ever since her debut, Blindsided, took...
© LitHub
Back to top