The Crime Fiction of Madrid

Madrid, the Spanish capital with over three million people. A city of elegant grand boulevards, ancient cafés and manicured parks. A royal city, home to Spain’s monarchy, but also a city that has seen tumultuous politics in the modern age: the Spanish Civil War, Franco’s fascist regime, the chaotic return to democracy in 1975 after the Generalissimo’s death, and the attempted coup d’état in 1981. Now Madrid proclaims itself undeniably the center of Spain against the separatist efforts of the Basque Country and Catalonia (see Crime and the City Barcelona). The fratricidal war, the dark years of fascism, the new nationalist, political and economic schisms are all played out in the city’s crime writing.

Every country has its answer to Edgar Allan Poe, Émile Gaboriau and Arthur Conan Doyle—pioneers of the crime novel in their own lands. Spain’s is Pedro Antonio de Alarcón and his 1853 work The Nail and other Tales of Mystery and Crime. Sadly, de Alarcón is hardly translated into English. Similarly Benito Peréz Galdós also remains untranslated, whose works that touch on crime and criminality. Both authors, giants in Spain, worked and died in Madrid. It’s frustrating, this translation business. Francisco García Pavon wrote a series of procedurals featuring Police Chief Manuel Gonzalez “Plinio,” and his sidekick, don Lotario, a local vet. Spanish readers always recommend them to me. Pavon’s Plinio, so they tell me, is similar in style to George Simenon’s Maigret, but Pavon was writing during the Franco years and so any serious critique of society or the police was impossible. However, Pavon is credited with having laid the foundations a later group of Madrileno crime writers were to follow in freer times.

But again, lack of translation makes things problematic. Juan Madrid, working mostly in the 1980s and 1990s, is hailed as a great noir writer in Spanish—Madrid’s answer to Raymond Chandler—but there are no English translations. Washed up boxers, corrupt cops, tarts with hearts, mysterious gypsies…all feature in Juan Madrid’s novels. Similarly, the work of David Torres is much praised, but frustratingly remains untranslated.

But we do have several novels from Arturo Pérez-Reverte who, for many years, was the bestselling Madrid crime writer. The Flanders Panel (1994) finds a 15th-century Flemish painting turning up in 20th-century Madrid and becoming the subject of a 500-year old unsolved murder for Julia, a Madrileno picture restorer. We also have Eduardo Mendoza, a well-known Barcelona writer, whose best-known book in the English reading world is An Englishman in Madrid (2010). It’s 1936, the civil war is about to kick off, and Anthony Whitelands, an English art historian, is invited to Madrid to value the collection of a Spanish duke. At a welcome lunch he encounters José Antonio Primo de Rivera, founder and leader of the Falange (Spain’s nationalist party). Some hidden treasures, a large dollop of espionage, and the need to get out of Spain fast ahead of the Falange, war, and the Soviets ensue.

Rafael Reig is a very Spanish crime writer with only a couple of titles in English but worth seeking out if you like your mysteries highly surreal. Reig’s Madrid is the near future, a Spain much more like America than Iberia. In Blood on the Saddle (2005) Manex Chopeitia is the legendary Big Brother of a genetic-engineering company that rules over Madrid. Reig’s hero Carlos Clot is a paunchy, sartorially inept, cowboy fan who is also a hopelessly alcoholic private eye. You can’t really compare Reig, or his characters, to anyone else—he’s a Madrileno one of a kind.

More recent is Marc Fernandez’s Mala Vida (2019), described as a Spanish noir where “Almodóvar meets Orwell”. Fernandez visualizes a Spain taken over by far right politics while a seemingly shadowy leftist organization seeks to reveal the long hidden crimes of the Francoist regime the new government is once again lauding. The novel taps into many current European fears of a resurgent far right and won the French Prix Plaidoiries for a crime novel at the Festival Clameur in Dijon.

As ever in crime fiction we find a lot of foreign writers paying visits to the city:

Some of Spain’s great contemporary writers have tackled criminal subjects over their careers. Javier Cercas’s Soldiers of Salamis (2004) is about how Spain might commemorate the Spanish Civil War and the crimes committed by both sides. His Anatomy of a Moment (2009) reconstructs the 1981 coup d’état and the almost laughable moustachioed Lieutenant Colonel Tejero who sought to overturn Spanish democracy by storming the Madrid parliament, pistol in hand. Outlaws (2012) is set in late 1970s just post-Franco Spain with poor refugees flooding into Madrid and the cities of the country’s north looking for work. Most recently Cercas’s The Imposter (2014) recounts the true life and “career” of Enric Marco, revered in Spain as a veteran of the Civil War, a crusader for justice, and a Holocaust survivor. He was though none of these things, and publicly exposed as a shameful liar and a fraud to much consternation in Spain.

But let’s finish with Madrid’s most famous novelist, Javier Marias. Marias is a prolific novelist, political commentator and has been translated into 42 languages. His father, a left-wing philosopher, was imprisoned by Franco and afterwards the family had to spend time in the United States. He has written approximately twenty novels, but for those who like highly literary crime A Heart So White (1992) is a must read. The novel’s narrator, Juan, uses his newly-wed wife, Luisa, to uncover his father’s murky past and two previous marriages. Juan wants to know why, in the middle of a family lunch at the end of their seemingly blissful honeymoon, his father’s first wife, got up to go to the bathroom and shot herself in the heart. A Heart So White is, as the critics often say too easily, an ambitious novel—covering multiple generations of a Spanish family and its hidden past. Juan, of course, discovers that in seeking to uncover the past there will be a price for his generation and family to pay too.

It is truly unaccountable that so much Madrid crime writing, so acclaimed in Spain, remains untranslated. To read a list of the untranslated of Madrid’s crime writing scene is enough to have you running to intensive Spanish lessons. Short of that all we can do is keep buying and reading what’s available in the hope it will inspire those great independents who do translate so much good international crime writing (Serpent’s Tail, Europa, Pushkin Vertigo, Bitter Lemon, and others) to spend some time browsing the bookshelves in Madrid. 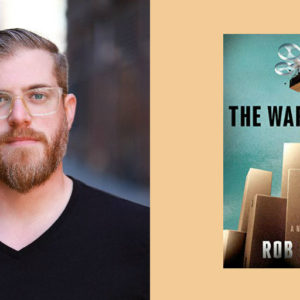 Rob Hart and I had plans to sit in a West Village café and talk about ending his private eye series featuring PI Ash McKenna...
© LitHub
Back to top