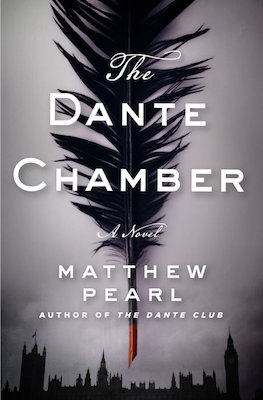 The following is an exclusive excerpt from The Dante Chamber, by Matthew Pearl, in which a man is found murdered in a mysterious and gruesome manner, with Latin words etched on the weapon. Pearl is the author of several bestselling thrillers rich in historical detail, including The Dante Club, and has been translated into over 30 languages. He is also the editor of the Modern Library edition of Dante's Inferno.

He would not be long for this world.

Hunched forward almost forty-five degrees, his body braced against the cold January wind, his big, tattered coat billowing behind. His legs trembled with each plodding step.

The coming dawn did not remove much of the gloominess these pub­lic gardens boasted at night. Strips of colored paper and beads that wel­comed the New Year two weeks before were still scattered over the ground, giving the appearance of colorful strands of hair and lost teeth. Here was one of the garden squares around London that better classes shunned and appreciated. Shunned, because it was a place of blackguards and outcasts; appreciated, because these blackguards and outcasts collected on the Wapping side of the Thames kept out of the way of respectable society. When respectable persons did have a need best served in North Wool­wich, they believed themselves invisible here.

Even in midwinter cold, ladies in elaborate, multicolored dresses walked along the elm-lined paths in pairs, objects of desire and subjects of contempt and fear for causing desire. Most of the girls who passed in sight of the plodder felt pity for him, though few pitied these girls. They did not know him; he was no frequenter of these gardens. One thing stood out: despite his terrible condition and his ratty clothing, the rest of him—his face plump and round, crystal blue eyes, silvering hair, smooth skin—all reeked of easier living somewhere else. Somewhere else must have been lovely.

He was like Atlas, stooped, about to lose his grip on the world.

He was like Atlas, stooped, about to lose his grip on the world.

The girls kept away, because whatever else the hunchbacked plodder might be he was in trouble that they could not afford. That explains why none came close enough to hear him utter, “God, have mercy upon me!” before his head drooped farther down. A loud crack like a whip followed.

Then he was a heap on the ground.

Another man approached at a stately pace. This man appeared some­what rotund in his long dark coat and had a beard that extended some six inches below his chin, where it slightly cleaved in two. He lowered one knee into the rain-matted grass next to the body. Full red lips quivered from under the black bristles of his mustache. He pressed his strong fin­gers to his own eyes as he wept.

A crowd of the bolder girls and other onlookers began to gather. Some men hastily buttoned up vests and straightened hats. The weeping man felt their unwelcome presence. His hazel-gray eyes darted from one face to the next. He threw his hood over his head and down upon his broad brow, and began to walk away.

Another onlooker in the crowd, a shorter man with a wide, crisp mus­tache, trailed behind him. “Dante? Dante, where have you—isn’t that you?” he called after him.

Simultaneous cries of distress, meanwhile, multiplied over the crumpled‑up man.

“Is the bloke dead? Look at that!”

“Don’t you see, over there? Writing: on that thing!”

A candle was secured as the sightseers closed in on the spectacle. They pointed in horror. The dead man was no hunchback, as he’d appeared from a distance. There was a massive stone that encircled his neck and back. It had put so much pressure on him that it had snapped his neck like a carrot. Someone feeling very bold—nobody remembered who, as recorded later in the reports of police interviews—reached out and touched the side of the man’s head, which wobbled on his limp neck like jelly. The crunch made by the bones as his head rolled would not be forgotten by any who heard it.

Article continues after advertisement
Etched into the stone that had crushed his neck were words.

Etched into the stone that had crushed his neck were words.

Some people scrambled away from death, and others fled the police whistles that broke through the chill morning air. Those who remained tried to make out the words carved in the stone. One girl with long hair to her elbows whispered in a husky voice:

“Can you read it, sweetheart, indeed?” scoffed a man. “Fancy that. A scholar, out here, in petticoats and torn hose.”

“’Tis true!” another girl chimed in, with a touch of awe toward her friend, pointing out that the first girl was half Italian, half Flemish, or something similar, and knew many tongues.

The others cleared space for her.

She hesitated, inhaling a breath of courage before translating the three carved Latin words into English: “Behold, the handmaiden of the Lord.”

Witnesses to a horror split up into those who will never talk about it, and those who never stop. By the time the police descended on North Woolwich, the men and women who had surrounded the dead man’s body began to sort themselves into these factions.

The anxiety of the park-goers who were already skittish around po­lice was hardly eased by the news that Inspector Adolphus Williamson himself was in the caravan of Scotland Yarders. When Dolly Williamson was assigned a case, people who knew anything knew to get out of the way.

Dolly wore a hat half a size too large, so that he was always shifting his head to keep it from falling over his eyes, which had an unsatisfied look to them.

He was correcting the tilt of this hat as he stepped down from his car­riage and asked: “Who is he?”

One of the constables replied they had not yet confirmed it. They had notions, said another. They weren’t certain, cautioned the first.

“Don’t hold your tongues with me,” Dolly reprimanded them, remov­ing a sprig of holly he was chewing. “Is his name Jasper Morton?”

(The following reaction was common when it came to Dolly’s pronouncements.)

Jasper Morton was a seasoned member of Parliament who represented Bristol. Not a particularly popular or effective legislator, but he held his seat in the House of Commons long enough that political longevity alone ensured his continued election.

“Close your jaw, Constable; you look like you’re going to bite me,” Dolly said. “A dead bloke in this district would not produce ringing at my door any more than the carcass of a cat floating among the rushes of the Thames—unless the corpse made the Home Office nervous. Rest easy that I have my own reasons, beyond those, to think of Morton.”

Dolly’s reasons had to do with a report he came across at Scotland Yard weeks earlier. Approximately a month before that, the legislator’s wife, Eleanor Morton, had mentioned to a police sergeant that Morton had seemed nervous and anxious when he was in public, and though the poli­tician himself insisted nothing was amiss, she worried that some angry constituent was pestering him. Morton did not like to complain about such things, she said with pride in her husband’s stoicism.

None of that was particularly noteworthy. What struck Dolly most in his memory of the report was that when a constable eventually attempted to interview the Honorable Mr. Morton about Mrs. Morton’s concerns, he could not find him.

“Injuries?” Dolly asked as they approached the body.

The hideous sight had remained in the same state as when first illumi­nated by the onlookers, though now expert eyes were trained on it. The massive stone fit around the neck and shoulders almost perfectly. The dead man’s head hung down loosely.

Article continues after advertisement
A mystery, by strict definition, was an event that could not be understood.

Another constable answered him. “Broken neck, Inspector. This is some kind of stone contraption—like a yoke made for a man instead of an ox—and it’s been attached to the poor fellow. No other violence done to the body. Real mystery, isn’t it?”

There were words etched on the stone—Ecce ancilla Dei—and they were scrambling to fetch a professor of Latin to consult with Dolly.

“Don’t bother. I can read it myself,” Dolly said, gnashing the sprig again between two side molars. “Now cover that up with your coat. I want no one else to see those words who hasn’t.”

To himself, he repeated over and over, trying to will it into making some sense: Behold, the handmaiden of the Lord.

He thought about the inscription and thought about the word the frightened constable chose: mystery. A mystery, by strict definition, was an event that could not be understood. Mysteries were for religions; mira­cles, things tucked away in holy scrolls. The peculiarities of this killing were neither haphazard nor the mark of the insane. If they were under­stood by someone, anyone—and certainly they were understood by who­ever did it—Dolly would not be far behind. Besides, there were other elements to consider. The public place. The prominent man as the victim. A human yoke made of stone. That inscription. The timing, at the break of day. Nothing hidden about this, no secret scrolls here—this was a page all London was meant to see.

Dolly knew there was one person who would not have missed watch­ing it for all the world: the culprit.

The Most Likable Antiheroes in Noir 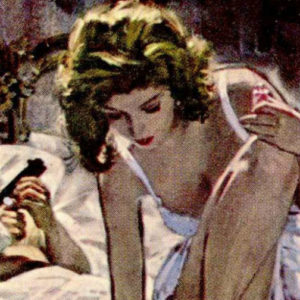 12 Cover Artists Every Vintage Crime Lover Should Know Scanning the face-out selection of crime and thriller novels in a modern American bookshop, one can’t help but recognize...
© LitHub
Back to top