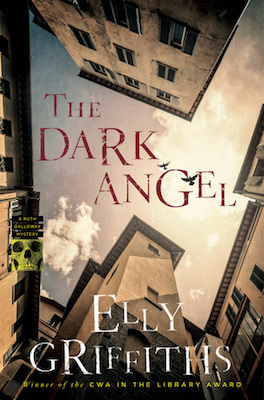 The following is an exclusive excerpt from The Dark Angel, by renowned archeological mystery writer Elly Griffiths, and the 10th in her series featuring archeologist Ruth Dalloway. In the following passage, a family visit to an archeological dig unearths larger questions about the meaning of death.

The archaeological site is on farmland about a mile outside a town called Arce. Although Angelo’s car is air-conditioned and comfortable, after half an hour of descending hairpin bends and ten minutes of juddering over unmade roads, both children are complaining of feeling sick and Ruth isn’t feeling too good herself.

‘We ought to stop,’ says Ruth nervously, looking at the car’s smart red interior.

‘Nearly there,’ says Angelo. Over his shoulder, he says, ‘You know, kids, you can’t be sick if you sing. It’s a scientific fact.’ And he launches into a version of ‘Old MacDonald Had a Farm’. After a few minutes of animal noises, the children join in. Shona is laughing in the back seat (Ruth was rather pleased to ride shotgun this time).

Ruth oinks half-heartedly. She is rather worried about the car’s brake cables.

They stop in what seems to be the middle of a field. Kate, looking around critically, says, ‘Where’s the pool?’

‘What pool?’ says Ruth. ‘We’re going to the seaside after this.’

Ruth groans inwardly. She has a secret hope that Kate will be a scientist or a doctor. Certainly not an actor. Nevertheless, she can share Kate’s disappointment with the site. Even to her expert eye there are no recognisable archaeological features, just grass, yellowed by the sun, and a few stunted-looking olive trees. Scaling rods in the middle of the field are the only signs that a dig is taking place.

Angelo, who is watching her, says, ‘There’s nothing to see on the surface, but geophysics shows that this was quite a significant settlement, about twenty-five hectares. We’ve found a marketplace and a theatre, as well as some sizable dwellings. And some of them have pools,’ he says, turning back to Kate.

‘Where are they, then?’ says Kate.

‘Under the earth,’ says Angelo. ‘But I’ve got a ­special camera that can show me pictures of what goes on underground.’

‘What techniques did you use?’ says Ruth. Having recently been involved in a case featuring bodies buried in tunnels, she doesn’t much like to think about what goes on deep underground.

‘What’s GPR?’ says Shona. She is looking rather hot and bored. Louis looks on the verge of a tantrum. He has the sensitive skin (and bad temper) that often goes with red hair.

‘Can I see the pictures of the underground pool?’ says Kate.

‘Did they have wells?’ says Shona. ‘You think of the Romans as being all viaducts and hypocausts.’

‘Wells had ritual as well as practical significance to the Romans,’ says Angelo. ‘You often find objects placed in Roman wells as sacrifices, perhaps to do with the cycle of the seasons or even fertility.’ He turns to Ruth. ‘Do you want to see where we found Toni?’

Shona asks if she and Louis can wait in the car with the air conditioning on, but Ruth is keen to see the trench, even though it’s so hot that her T-shirt is sticking to her back. She follows Angelo across the field, Kate holding her hand.

‘As I said, the settlement dates from about 500 CE,’ Angelo is saying. ‘We think it was abandoned and then the building materials were scavenged.’

‘Do you have any idea why it was abandoned?’

‘No, but there was a lot of fighting around that time. Lots of these little towns were centres of resistance against the Romans. Have you heard of Fregellae?’

‘It was a town near here, established by the Volsci. This was Volsci territory at one time, until they were pushed further south. Initially, Fragellae was on friendly terms with the Romans and stopped Hannibal’s advance by burning the bridges across the Liris. Later on, though, they rebelled and the Romans razed the place to the ground.’

‘And you think the same may have happened here?’

‘Maybe. It’s a similar set up to Fregellae and quite close to the Via Latina, which was the main road to Rome. It could be a really significant site, if only . . .’

He’s silent for a minute, and Ruth wonders if he’s going to mention jealousy again, or the plot to kill him.

‘There are people who don’t want money spent here,’ says Angelo. He’s silent for a minute, and Ruth wonders if he’s going to mention jealousy again, or the plot to kill him. But then she realises that he’s looking past her. A black Fiat 500 has left the main road and is bumping over the grass towards them. Angelo says something in Italian—Ruth can’t tell if it’s an expletive or an expression of pleasure.

‘My team,’ says Angelo, and strides off towards the car, which has parked next to Angelo’s jeep. Ruth doesn’t follow him. Angelo will introduce her if he wants to. She also thinks that he didn’t sound too keen to see his teammates.

She and Kate walk over to the trench, which is roped off with police tape. A slightly melodramatic touch, thinks Ruth, but it’s probably for the TV cameras. The trench is neat though, its edges perfectly straight. Ruth approves. She bends down to examine the grave cut. Kate copies her.

Ruth straightens up and sees Angelo coming towards them with a man and a woman, both young and dressed in shorts. Angelo is now grinning broadly.

‘Ruth, I want you to meet Marta and Roberto, my graduate students and colleagues. This is Dr Ruth Galloway from the University of North Norfolk, and this is Katie, who is going to be a famous actor one day.’

Handshakes all round; Roberto even bends down to shakes hands with Kate. Ruth is rather impressed that Angelo remembered about Kate wanting to be an actor, even though it makes her cringe to hear this particular ambition out loud. She imagines people thinking she’s a pushy showbiz mother.

‘Good news, Ruth,’ he says. ‘Marta took a call from Cielo Blu, the TV people. They want to start filming again. They’re really excited that I’ve brought in an expert from England. They want to interview you tomorrow.’

‘Interview?’ says Ruth, with a feeling of dread.

‘Film you,’ says Angelo. ‘We can do it at Mamma’s house. That’s scenic enough.’

Ruth opens her mouth to say that she doesn’t want to appear on TV, but she knows how much this means to Angelo so she just smiles and says, ‘That’s great.’

‘It’s more than great,’ says Angelo. ‘It means that we can carry on with our work here.’

And you’ll be back on television, thinks Ruth. Sometimes, in spite of the tan and the designer black shirts, Angelo reminds her of Phil.

‘What do you think of the site?’ asks Marta. She speaks perfect English too. She’s very slim, with short, dark hair and narrow, intimidating-looking glasses. Despite the glasses, Ruth warms to her.

‘It’s interesting,’ she says. ‘I’ve just been looking at the trench where the bones were found. The bones were well preserved but the soil is quite chalky. Do you think that there may have been a coffin?’

‘You sometimes get wooden coffins from this era,’ says Angelo, ‘but stone is more usual. There’s no sign that this body was enclosed in anything though. No marks on the soil indicating decayed vegetable matter.’

‘No grave goods either,’ says Marta. ‘That’s unusual. Romans were usually buried with something for the afterlife. Pottery, say, or glass beads.’

‘And the grave wasn’t within a house?’ says Ruth. ‘Romans were sometimes buried in the home, weren’t they?’

‘Yes,’ says Angelo, ‘in early Roman houses it’s quite common to find dead family members buried under the house. They were called dii manes, the spirits of the good. No, the body was buried a little outside the main town. That, and the fact that he was buried face down, makes us think that Toni was an outsider.’

Stranieri andate a casa, thinks Ruth. She remembers Angelo saying that, here, even people from the next village are foreigners.

‘If he did have a tattoo on his leg, or the marks of shackles, maybe he wasn’t Roman at all,’ she says. ‘Maybe he came from overseas.’

‘You could be a Roman citizen even if you were born overseas,’ says Angelo. ‘There were black Romans—even a black emperor, some say.’

‘I know,’ says Ruth, ‘but it’s unlikely that a high-status Roman was buried face down without any grave goods.’

They are all looking into the trench now. Roberto and Marta hang back respectfully. Ruth kneels down to look more closely at the soil. ‘The topsoil’s broken up by ploughing,’ she says, ‘but the layers are preserved lower down. I don’t think our man was buried in a hurry. I think he was left here, quite deliberately, face down, with a stone between his teeth.’

She has almost forgotten Kate’s presence but, as usual, her daughter is listening hard.

‘Come, Katie,’ says Roberto. ‘You want to see what I found in another trench? Is the skin of a snake.’

Ruth is grateful to Roberto for the distraction, even though she’s rather scared of the thought that there must be snakes in the vicinity. When Kate is out of earshot, she says, ‘I’ve been looking up cases of bodies buried with stones in their teeth.’

‘There was a recent case in Ireland where skeletons were found in a church cemetery with stones in their mouths. Researchers thought it had been done because they believed that it would prevent the bodies returning to haunt the earth.’

‘Like vampires being buried with stakes through their hearts?’ suggests Angelo. Ruth thinks his tone sounds rather frivolous.

Article continues after advertisement
“Either the dead person was a felon or some sort of outcast, or people were genuinely afraid that he would rise from the dead.”

‘Vampires are a sixteenth-century construct,’ she says. ‘This church was eighth century. It was more like a belief in zombies. Revenants, they’re sometimes called, dead bodies that return to life.’

‘I’ve never heard of that happening with a Roman burial,’ says Angelo.

‘Maybe not,’ says Ruth, ‘but there was a Roman British skeleton found in Stanwick in England, dating from the third or fourth century. The body had been buried face down with a stone replacing its tongue.’

Marta, who has been listening intently, says, ‘Like Toni?’

‘There are some features which sound similar,’ says Ruth. ‘Sometimes you do get body parts replaced by stones in Roman British burials. A rock in place of the skull is most usual. But this did seem to imply some sort of punishment.’

‘Punishment for what?’ says Marta.

‘Or maybe the poor man was epileptic,’ says Angelo, ‘or mentally ill, and bit his own tongue off. The stone could be a way of replacing it for the afterlife.’

‘That’s possible,’ says Ruth. ‘But the fact that the body was buried face down does seem to indicate a deviant burial. Either the dead person was a felon or some sort of outcast, or people were genuinely afraid that he would rise from the dead.’

To her surprise, Marta crosses herself. Angelo looks over to where Roberto is helping Kate dig in the dry earth.

‘Come on,’ he says. ‘The place for digging is at the seaside.’ He bounds over and sweeps Kate off her feet, whirling her round. She squeals with excitement, rather as she did on the plane. 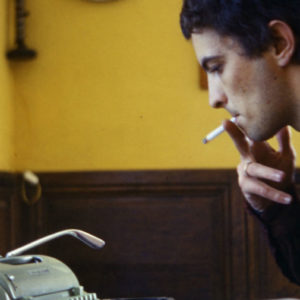 Why Jean-Patrick Manchette Abandoned the Crime Novel —The following was written as an introduction to the novel, Ivory Pearl This striking posthumous work—La Princesse...
© LitHub
Back to top