Exploring the disorienting, unsettling novels of a French master.

With the March release of A Long Way Off, Gallic Books will have introduced their twelfth English translation of the noir novels of Pascal Garnier (1949-2010). Gallic is uncertain as to whether there will be other translations; but whether there are or not, this is an opportune moment to assess these dozen titles.

Garnier, who also wrote short stories and children’s books, authored these twelve dark and violent novels in a deceptively approachable way. His narrator’s (almost always third person) tone is always light and comfortable but the books are hardly cozy mysteries. He described things like psychosis, sudden and deadly assaults, incest (he was particularly preoccupied with that transgression), and other acts of desperation carried out by haunted individuals from a quiet, contemplative standpoint. He let his unhinged characters make all the noise. 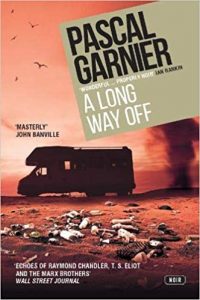 One recurring motif in Garnier’s noir novels is geographical displacement. He liked to take people out of their homes and send them to other locales, to unsuitable places. He had a penchant for writing about people experiencing great turmoil while they’re away from home. Displaced and under great strain, Garnier’s characters behave strangely. Some experience complete personality disintegration and become capable of extreme acts, including murder. Given this penchant for exiling his characters from their homes, it’s interesting to note that Garnier, who was raised in a Parisian suburb and dropped out of school when he was 15, spent time traveling the world as a youth and young adult. Like many of the characters in his novels, Garnier moved to a quiet, provincial area of France after residing in major French cities for most of his adult life.

Garnier met his second wife, Nathalie Ainge-Garnier, in 1997, at a literary event where he was a guest author and she was a volunteer. They remained together until Garnier’s death from cancer in 2010. His widow tells that the two fell in love at first sight and had mutual appreciation for the writing of Georges Simenon, Emmanuel Bove, and Chester Himes. Nathalie was with Garnier when he wrote most of his noirs, and she says he got his ideas for the books from sources such as radio documentaries, newspaper stories, and the people in his life. She explains that his novel The Panda Theory was inspired by a photograph a writer friend of Garnier’s secretly took of a peculiar-looking man seated on a railway platform bench. That the one picture stirred up in Garnier’s mind all that takes place in the novel is indicative of the power of his imagination.

The author’s daughter, Eve Garnier, who is a Montreal-based performance artist working in dance and theater, remembers her dad making up tales about strangers during her childhood. Although Garnier and her mother split when she was a toddler and she was mostly brought up by her mother, Eve recalls times when she and her father sat in cafés together and invented stories about the patrons surrounding them. She also says her father was someone who could not handle conflict. If he had any, he  tended to make up his own memories about what had happened, discarding the facts of what occurred. Knowing about Garnier’s powers of  imagination creates a lightbulb moment when considering a quote he cited by the writer and philosopher Fernando Pessoa: “Literature is proof that life is not enough.”

The twelve Garnier novels that Gallic has brought out in English can be divided into three tiers in terms of their quality. Using the measures of general strength of the writing, how memorable the characters are, and how compelling the plot, they are rated in three groupings below. The dates by each title show the year of the original French edition published by Zulma, followed by the year in which Gallic’s English translation was released.

It’s the early 1990s and Yolande Bonnet hasn’t left her family’s home in the Picardy region of France since German soldiers terrorized her as a teenager during the occupation of the 1940s. Yolande believes the Germans are still lurking around the neighborhood. She lives with her younger brother Bernard, a generally mild-mannered railway worker. Bernard looks after his psychologically damaged sister and has made great sacrifices for her. But now that he’s been diagnosed with a terminal illness, all that he’s kept bottled up abruptly rushes to the surface and has him acting out in sudden and volatile ways. This is the most disturbing of the twelve Gallic novels..

Fabien Delorme leaves his Paris residence to spend a weekend with his father in Normandy. When he returns home, he learns that (a) his wife died in a car accident while he was away, (b) the accident occurred in Dijon, where she had no business being, and (c) a man who turns out to have been her secret lover perished alongside her. Fabien learns the identity and Paris address of the dead man’s widow and begins stalking her. When he follows the woman and her omnipresent female friend on a vacation to Majorca, we know his obsession has spiraled out of control. Many of Garnier’s novels are ripe for film adaptation, and this one positively screams to be made into a work of contemporary film noir.

Simon is a career hitman in his 60s or thereabouts. Suffering from a serious unnamed illness, he has decided to end his own life after ending so many others’. But he has one last job to do. He enlists the companionship and chauffeur services of Bernard, a simple-minded but likable guy of 21, when they meet by chance. On their travels to Simon’s final murder assignment, they pick up a free-spirited but troubled young woman and her baby. A road story largely set in and around throwaway tourist spots, it’s a tale that keeps the reader guessing as to whether the next scene will contain destruction, dark humor, or fleeting rays of hopefulness.

A 40-ish man named Olivier is pulled away from his current residence in Nice to his hometown of Versailles when his mother dies. Inclement weather both delays the funeral service and keeps Olivier from being able to travel back to Nice during the interim. While trapped in his boyhood environs, he has a chance encounter with his teenage love Jeanne, with whom he committed a horrific act 25 years before. As the two get reacquainted, it’s like their interpersonal bond and their joint history of violence never really faded. But Jeanne’s brother Rodolphe, who’s jealous of their union and is onto their terrible secret, is plotting against them.

A peculiar man named Gabriel turns up in a Breton town. He’s not from the area, doesn’t seem to have any connections to the place, and has no apparent purpose for being there. Yet he gets involved in the disordered lives of a small group of locals and becomes a kind of reluctant nexus around whom their worries, desires, and schemes orbit. Gabriel comes off as empathetic and guileless. But he’s so emotionally detached, in addition to seeming purposeless, as to make him a worrisome enigma. Episodes from Gabriel’s past, which are weaved into the narrative here and there by Garnier’s omniscient narrator, reveal that he has a troubled history involving family members he never talks about at all.

A husband and wife named Brice and Emma decide to leave their home in Lyon and relocate to a countryside village. But shortly before their moving date, Emma, who’s a journalist, goes missing while traveling on assignment. Brice makes the move, anyway. On his own in unfamiliar surroundings, he slips into a waking dream state and becomes involved with a local woman who’s both physically attractive and mentally unbalanced.

Two married couples are the first residents of a new retirement community in the South of France. They came for the promises of abundant sunshine, security, and ease. But the caretaker’s an aloof sadist, the social secretary’s a stoner who doesn’t know what to do with them, an attractive single woman moves in and gets everybody bothered, and a band of gypsies sets up camp in a spot that has to be crossed to get from Les Convivialeso the nearby town center. Garnier is sometimes darkly humorous in these novels, and in this particular book he works in black humor to great effect.

A recently widowed woman named Éliette sells her house in the Paris suburbs to move to her family’s vacation home in the mountains. But instead of leading a life of restful contentment in the small village, she finds herself surrounded by deadly violence..

Told in the first person, the narrator is Jeff Colombier, a 50-year-old author who’s been a relative unknown until he surprisingly wins a prestigious literary prize. He responds to success in typical Garnier fashion: he leaves home, goes out on the road, and has a bunch of experiences that are like an especially dangerous carnival funhouse ride experienced on acid.

Read These if You’ve Become a Completist

In this novel told in dual perspectives, the reader follows the development of a novel about a down-on-his-luck guy who murders his mother for the inheritance, and simultaneously witnesses the thoughts and actions of the book’s author.

A cantankerous man in his 70s begins to soften when he sees romantic possibilities between himself and the woman who’s his live-in personal assistant. Then a 40-year-old guy turns up at their door and announces he’s the son the older man never knew he had. This launches a series of progressively unpredictable, sometimes deadly, actions by the elder man.

A middle-aged man experiencing wanderlust pulls his mentally ill daughter out of a psychiatric facility. Their travel adventures are bizarre and perilous. 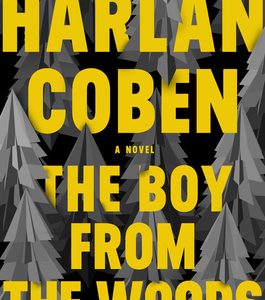 Matthew was in Crash Maynard’s enormous mansion on the hill. The mansion’s exterior looked old and kind of Gothic...
© LitHub
Back to top