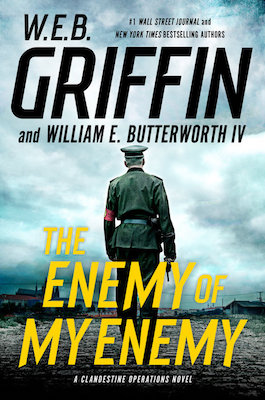 The following is an exclusive excerpt from The Enemy of My Enemy: A Clandestine Operations Novel, by W. E. B. Griffith and William Butterforth IV. In the following passage, a post-war President Truman gets some unpleasant news about escaped Nazis.

The President came out from behind his desk and walked to the couch. “And you say there’s more?” Truman said, tossing the sheet back to the desktop. “Jesus! It’s bad enough that this Odessa organization has been smuggling SS bastards out of Europe—and out of our grasp so we can’t prosecute them—but now, when we finally grab two of Odessa’s top leaders, they somehow snatch the sons of bitches from our prison? It’s outrageous!”

“Pour yourself a drink, Sid. While you’re at it, pour one for me.”

“It’s two o’clock in the afternoon.”

“Pour the drinks. You’re going to need it,” the President said, then sat down, and while Souers was retrieving a bottle of Haig & Haig scotch from the credenza, where it was concealed from public view, he picked up the telephone. “Get Justice Jackson for me,” he ordered, then pushed the speaker button and put the telephone handset back in its cradle.

When Truman had been a United States senator from Missouri, Supreme Court Justice Robert H. Jackson would join him and Captain Souers, USNR, for dinner and drinks in Truman’s apartment—away from the prying eyes, and ears, of the Washington establishment.

Now, Truman had recently named the fifty-four-year-old Jackson—who had been FDR’s attorney general before nominating him to serve on the Supreme Court—as chief U.S. prosecutor for the Nuremberg trials.

Voices from the telephone speaker immediately began to be heard.

“Vint Hill, Presidential priority. Justice Jackson in Nuremberg on a secure line. Conversation will not, repeat, not be transcribed.”

“This is the White House calling. The President for Justice Jackson.

The line is secure.”

“Bob,” the President said, “Sid and I were sitting around having a little nip, and we figured, what the hell, let’s call Bob and have a little chat.”

“That’s flattering, Mr. President. What would you two like to chat about?”

“How about those Nazi bastards who escaped the Tribunal Prison? We’ve got to get them back and make damn sure it never happens again.”

Article continues after advertisement
“How about those Nazi bastards who escaped the Tribunal Prison? We’ve got to get them back and make damn sure it never happens again.”

“Harry, everybody’s working on it. Just a few minutes ago, I had Colonel Cohen in my office.”

“He’s the counterintelligence guy in Nuremberg?” Truman said, glancing at the SIGABA message.

“Right. Smart as they come. The only thing he had new for me was that he added the AVO to the list of suspects.”

“And what the hell is that?”

“It stands for ‘Államvedélmi Osztálya.’ It’s the Russian-controlled Secret Police in Hungary. It’s headed by a chap named Gábor Péter, who Cohen says is a real sonofabitch.”

“That’s all this Colonel Cohen had to say?” the President asked, almost incredulously, staring at the telephone.

“He said Super Spook might have some ideas. And should be involved, and I heartily agree.”

“Who the hell is Super Spook? More important, why isn’t he involved?”

“Captain Jim Cronley. The man you chose to be my bodyguard. He ran the operation in Vienna that bagged Burgdorf and von Dietelburg. I started calling him Super Spook when he figured out how Odessa managed to smuggle cyanide capsules into the Tribunal Prison.”

“I know who Cronley is, Bob. I promoted him to captain. And gave him the Distinguished Service Medal for what he did in Argentina with that half ton of uranium oxide some other Nazi bastard was about to sell to the goddamn Russians. And now you call him Super Spook? A twenty-two-year-old?”

“He’s that good, Harry. Young, yes, but remarkably good. You just said so yourself, in so many words.”

“Then why the hell isn’t he involved? Jesus H. Christ!”

“He’s in Argentina,” Souers put in.

“Oh, shit,” Souers said. There was a tone of resignation when he said it.

“I advised Sid not to tell you,” Justice Jackson interjected. “Tell me what, damn it?”

Souers pointed at the SIGABA message.

“So what?” the President said, then asked, “Cronley shot them?”

“No,” Souers said, “the shooter was a lieutenant named Spurgeon. Of the Vienna CIC.” He sighed audibly. “Harry, can you hold your questions until I’m finished telling what went down?”

“Probably not, but let’s see.”

“Cronley was working pretty closely with the Austrians when he realized what they were up to, that when they captured von Dietelburg he would be an Austrian prisoner, not ours. They intended to put him on trial themselves. Cronley decided this was a bad idea.”

The sound of Justice Jackson chuckling came over the phone speaker.

Truman glared at the telephone.

“Okay,” Souers began, “I don’t know how much Cronley considered your belief that these people should be tried, and hanged, with as much publicity as possible as common criminals so that the Germans would not regard them as martyrs to Nazism, murdered by the vindictive victors. But every time I decide he’s too young and inexperienced to understand such and such, he’s proved me dead wrong.”

“Anyway, he concluded that the solution to the problem was to keep the Austrians out of the actual arrest—”

“He decided this on his own?” the President interrupted, his tone again incredulous. “Without checking with his superiors?”

Truman impatiently gestured for Souers to go on.

Souers continued. “That’s why I wrote on the message that there was more. Including that Cronley’s relations with his immediate superior, Colonel Wallace, who sent that SIGABA message to me, are not cordial. Cronley also believes that if you think your superior is going to say no when you ask permission to do something and you know you’re right, don’t ask, just do it.”

“And beg forgiveness afterward,” the President added. “I’m familiar with it.”

“The justification that Cronley offered,” Souers went on, “for arresting Burgdorf and von Dietelburg on his own was that they wouldn’t live long in an Austrian prison—”

Justice Jackson interjected: “And he could then fly them directly to Nuremberg, on illegal airplanes, without the hassle of going through border control authorities.”

“Two Fieseler Storches,” Jackson answered. “Sort of German Piper Cubs, but much better. Three-place, not just two-place. The Air Force ordered their destruction. Cronley appeared not to know about this order.”

Jackson laughed, then went on. “In his ‘innocence,’ he kept his two in a well-guarded hangar in Nuremberg. The aircraft were thus available to fly to the Compound in Munich, first with one of General Gehlen’s assets in Russia, one Rachel Bischoff—”

“Whom the Austrians wanted very much to interrogate,” Souers interjected.

“—and later Burgdorf and von Dietelburg to the same place,” Jackson finished.

“At this point, the Austrians went ballistic,” Souers said. “They issued arrest warrants. For murder, in the case of Lieutenant Spurgeon, and for various crimes and misdemeanors for Cronley, Winters, and everybody else concerned. OMGUS has issued a ‘detainer’ on everybody for illegally leaving and then entering Germany without passing through an entry point. And the Air Force is demanding that the Army bring charges: one, against Cronley for not destroying the Storches, and, two, against Cronley and Winter for flying them after the Air Force declared them unsafe. And also charges against Cronley for flying at all, because he is neither an Army aviator nor an AAF pilot.”

“I’m finding it hard to understand the legal ramifications of a nonpilot illegally flying an ostensibly nonexistent airplane, but that’s where we are, Harry.”

“Lawyer that I am,” Jackson said, “I’m finding it hard to understand the legal ramifications of a nonpilot illegally flying an ostensibly nonexistent airplane, but that’s where we are, Harry.”

“Oscar Schultz,” Souers then said, “on learning what had happened, decided the solution to the problem was to get everybody the hell out of Dodge while he, quote, poured money on the Austrian volcano, unquote. So, everybody went to Argentina just about a month ago. Cletus Frade is hiding them in Mendoza, on one of his estancias.”

After a moment, President Truman, his tone unpleasant, said, “Is that all?”

“I was annoyed with this situation when I first got wind of it today,” Truman went on, his voice rising. “Now that I’ve learned all this—and, more important, that both of you bastards kept it from me—I am what is known as royally pissed off.”

“Harry,” Jackson said, “both Sid and I felt that it would die down.”

“But it hasn’t, has it?” Truman snapped. “Even worse, Burgdorf and von Dietelburg, those despicable Nazi bastards, are now on the loose, goddamn it!”

“Harry, Bob and I decided that you had more important things on your plate—”

“Well, Sid,” Truman interrupted, “you were wrong. The most important thing on my plate at this time is getting those two SS sons of bitches back behind bars so we can try them and then hang them. If this Colonel Cohen thinks Captain Cronley can help him, you get Cronley out of goddamn Argentina and to goddamn Germany as soon as humanly possible. Got it?”

“And you, Bob, you start right now on getting OMGUS and the Air Force and anybody else off Cronley’s back—and Cronley’s people’s backs—and keep them off. They deserve medals and they damn sure shouldn’t have to be running from the law like John Dillinger’s gang of bank robbers. Got it?”

The Greatest Crime Films of All-Time 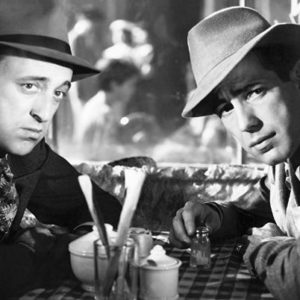