The Evolution of Walt Longmire: Somewhere Between Laughter and Death

For a series of books praised for their humor, death haunts Craig Johnson’s Walt Longmire books prominently, even by murder mystery standards. Like the owl, a Cheyenne symbol of mortality, death always hangs over the beleaguered Wyoming sheriff.

Yet contradictions like this fill the series. Walt is a hero in the traditional western mode, but he fights against many or the region’s worst traditions. His partner Vic, originally designed as a foil whose every trait was opposite to Walt’s own, becomes his romantic interest.

We have spent over a decade reading about Walt, but only a few years of his life has passed. Signing on to do a series with a lead character past fifty, Johnson decided to make each book a season, “Like doing a Vivaldi.” These seasons can be seen as a cycle that guide us through the life of a man figuring out where he is and what he’s capable of, just as that owl comes more into view.

The series begins with Walt in a deep depression caused by the death of his wife. We learn the tragedy is less about the longing of a life mate and more about wondering what he has done with his life and where he has ended up. Much of this cycle plays out through his evolving relationship with Absoroka County, the place he has sworn to protect, yet in which he sometimes feels trapped.

The first novel, The Cold Dish, sets everything up perfectly. Someone is picking off a group of boys who got off with a slap on the wrist after Walt arrested them for raping a Cheyenne girl who suffers from fetal alcohol syndrome, and Walt has to hunt down the vigilante. As he closes in on the tragic truth, he finds a purpose.

The book is an amazing debut—not only does The Cold Dish have the craftsmanship of something usually written by a seasoned pro, but the narrative establishes almost every major character and theme in the series. The sense of community, humor, and Native American spirituality are all set up for Johnson to explore and weave throughout the books. The issue of crimes against women, and the presence of an investigation with consequences that inspire Walt to question his job and how he feels about his town, are themes that announce themselves with clarity, yet with a complexity that evolves in novel after novel. Even the sheriff’s election that runs throughout this first cycle is first addressed in The Cold Dish.

For a series of books praised for their humor, death haunts Craig Johnson’s Walt Longmire books prominently, even by murder mystery standards.

Johnson’s sophomore effort, Death Without Company, has Walt investigating a present-day murder, connected to the past of Lucian Connally, the sheriff before him. The story is a study in the emotional toll of law enforcement and how both sheriffs have dealt with it. We also see the first sparks of Walt’s romance with Vic, as well our first introduction to series character Deputy Saizarbitoria, who enters the scene to help Walt gain understanding of and entrance to Wyoming’s Basque culture during the course of the investigation.

Kindness Goes Unpunished takes Walt, along with Cheyenne buddy Henry Standing Bear, to Philadelphia, to see his daughter, Cady. Soon, Cady is beaten badly by her boyfriend and Walt becomes a suspect when the man is found murdered and hanging from the Ben Franklin bridge. It’s great to watch Walt build allies in a community he doesn’t belong to. He also finds more purpose, discovering he still is very much a father.

Another Man’s Moccasins is one of the darkest books in the series, once again connecting a present murder to the past—this time, Walt’s own past, as he must recall his time in Vietnam and his first homicide as a Marine investigator in order to clear a body dump in his jurisdiction. This is a hero’s journey through the underworld. By facing his past, Walt is given tools to deal with his depression and the dark parts of his life.

The Dark Horse brings this first cycle to a close, as Walt goes to another jurisdiction to clear a woman of a murder to which she had confessed, although his motives are less than altruistic—he doesn’t just want to do this for justice, but to be out of town as the election draws near. Despite his absence, his people prove to be behind him—not only do they reelect him, but practically every major character pops up to give him a hand or get him out of a jam. 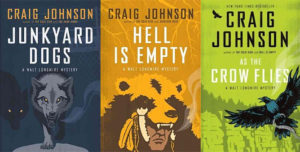 Perhaps because of all those murders he had to deal with in a single year, Walt finds himself facing his own mortality in the next few books. In keeping with contradictions, the first book in this cycle is the most amusing.

After rediscovering his vitality and learning to keep his depression in check, it seems Walt had earned a more comic excursion in Junkyard Dogs. Walt uncovers bad family blood and Peyton Place shenanigans in Absoroka County when looking into the murder of the local junk man who belongs to an accident-prone clan. Even the discovery of the body has a burlesque comic moment after an expression of poignancy. “I set out to write a book about the effects of winter on our worst impulses and ended up with one of my funniest.”

Hell Is Empty most directly deals with Walt’s mortality in an action yarn that nearly kills him. After a killer has escaped and kidnapped an FBI agent, he finds himself back on the mountain that nearly killed him in The Cold Dish. There a few “ghosts”, several near misses with nature, and many references to Dante’s Inferno. Walt goes through Hell to learn he will be a grandfather.

As The Crow Flies concludes the cycle with the idea of renewal as Walt and Henry visit the Crow Reservation to confirm a location for Cady’s wedding. When they witness a woman fall from a cliff who Walt believes was pushed they are drawn into mystery dealing with the politics of the rez as well as the plight and humanism of its people. The idea of death seems to hang even over the wedding ceremony. In the next books it will take on physical form.

The last several books have been consumed with Tomas Bidarte, a Moriarty to Walt’s Holmes. The name comes from the Basque word for “between.” Johnson weaves him through the rest of the books, making his presence known even if he is not in direct confrontation with Walt —as Craig Johnson has described him, “Bidarte is the antithesis of Walt Longmire, who is a fervent believer in the rule of law; Bidarte is the embodiment of chaos.”

Serpent’s Tooth is the most traveling Walt and company do on an investigation. It starts with Walt trying to help a teenage boy kicked out of a polygamous cult to find his mother. The journey leads to a plot involving big oil, drug cartels, possibly the CIA, and Bidarte as the one managing it all. Crossing this mastermind causes one of Walt’s deputies to get killed and leads to an unexpected tragedy for Walt and Vic.

Article continues after advertisement
The last several books have been consumed with Tomas Bidarte, a Moriarty to Walt’s Holmes.

In Any Other Name, Walt and Lucian look into the suicide of a fellow lawman in another county. Bidarte doesn’t appear, but his evil is apparent in this more traditional hard boiled mystery with noir leanings. Some of the darkness is lifted by the birth of Walt’s granddaughter, Lola.

Dry Bones has Walt working a case that puts him in the middle of a political fight concerning the discovery of a fossilized Tyrannosaurus Rex. What appears to be one of the lighter books becomes very dark when Bidarte strikes from afar. Walt is forced to stay in Wyoming close the local case and help his family deal with the tragedy.

An Obvious Fact is a book that gives Junkyard Dogs a run for its money for humor. It strips everything down to the three main characters of Walt, Henry, and Vic as they try to a clear a young man, who may be Henry’s son, of murder, while in the midst of a raucous biker rally. This lighter mystery gives Walt and Vic a moment for them to breathe and to heal in their relationship before Walt enters the next phase. 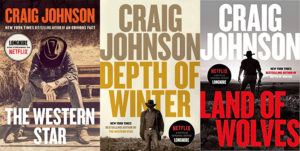 The last two novels have Walt taking a more aggressive move toward Bidarte. In both, a question arises: how much will Walt compromise his morality to get his man?

The Western Star is another dual mystery connecting past and present. One is whodunit on a moving train full of Wyoming sheriffs with Walt as a freshly minted deputy in the early seventies. The other is in the present and has us trying to figure out why Walt has gone down to Cheyenne to stop an inmate from getting compassionate release. They both lead to a somewhat cliff hanger involving Bidarte.

The most recently published novel, Depth Of Winter, begins right after The Western Star. Walt has to go into narco-occupied Northern Mexico to save his daughter and take care of Bidarte once and for all. Humor is provided by a rag tag team of locals he assembles for help, but it has the highest body count of any Longmire novel.

The next novel, Land Of Wolves, will probably move into another transition for another change. Walt will be dealing the fallout from his dance with Bidarte. Johnson has set up several situations and emotions for Walt and company to work out. Expect humor, healing, and rebirth. Also, keep your eyes peeled for owls on the landscape.

A legendary crime bookseller, Scott Montgomery works at BookPeople, Austin's largest independent bookstore, and runs MysteryPeople, the mystery bookstore within the store. He also runs The Hard Word blog, https://www.thehardword.me. Always a crime fiction fan, Scott Montgomery worked on the sales staff of the acclaimed and influential The Mystery Bookstore in Los Angeles for four years. 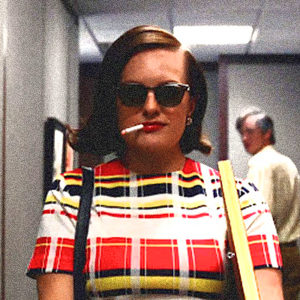 Women have always been ambitious, but it finally feels like we’re allowed to celebrate it, to own our ambition without...
© LitHub
Back to top