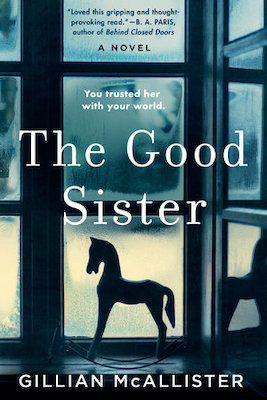 The following is an exclusive excerpt from The Good Sister, Gillian McAllister’s US debut about two sisters, Martha and Becky, whose most intimate of bonds is tested by the most horrifying occurrence—the death of Martha's child, under Becky’s care. As Becky’s murder trial proceeds, the relationship between the sisters is newly and irrevocably challenged.

Christopher lets himself into his seafront town house alone. It smells empty. Cold, too, despite the late-summer heat wave. The cleaner has been here—he has never met her, but he imagines her to be petite and ruthless—and the wooden floor gleams as he sets his briefcase down on it. The dog walker has been, too, and Rumpole emerges, the sound of his claws on the tiles like clinking marbles.

“All right,” Christopher says to him, as if he is a housemate or child.

Rumpole stops and looks at him seriously, then turns his head to look sideways, pointedly, at his bowl.

For the first time in years, Christopher feels unsettled by a case. He shivers in his cold kitchen and rubs the dog’s head.

It is a baby case. Is that why it feels eerie? He supposes so. An eight-week-old, found unresponsive in the morning. Of course that is chilling. Of course it is.

No, that isn’t why, he realizes, as he looks out onto his back garden. That isn’t why he feels spooked and strange.

It is the cause of death. Smothering.

Even the word is sinister. The images it brings to mind.

Layla had been found unresponsive in the morning, and had been in the sole care of the defendant, Becky, for the entire previous evening. There had been no witnesses.

It is cut-and-dried, surely.

The experts were in agreement that the baby had died in the evening—between 8:00 p.m. and 9:30 p.m. The 999 call was made at eight o’clock the next morning. The delay doesn’t look good, Christopher thinks.

That said, the police hadn’t suspected murder for a whole week. Cot death, they’d thought, until the postmortem showed smothering. No, not smothering, he corrects himself. Asphyxiation. There is a subtle difference. Often, asphyxiation means smothering, but not always. Sometimes, it is an accident. She could have rolled over. Become tangled up in her blankets. Something he hopes for. Natural causes. The only possible defense, he thinks.

“We’ll have to see, won’t we?” he says. Rumpole looks back at him, cocking his head.

No, not smothering, he corrects himself. Asphyxiation. There is a subtle difference. Often, asphyxiation means smothering, but not always.

Sadie bought them the dog. Completely out of nowhere, when they were forty-five, and still in love, he supposes. He arrived home from a case about one prisoner encouraging another to hang himself, his gut still in knots from it, and there was Sadie, her slim ankles tucked up underneath her, her legs tanned from the summer, a Labrador sitting upright, primly, next to her as if they were in a waiting room.

“He was abandoned,” she said immediately. Apologetically, he thought.

The dog considered him, too.

“Oh, for God’s sake,” he said to Sadie. A sentence he bitterly regrets.

He pours himself a glass of water now from a bottle in the fridge. He should read the submissions, later tonight. There is something in Becky Blackwater’s past they want him to consider. He hopes it isn’t something bad. Something even worse than what is playing out in front of him.

He’s never seen an aunt accused before. Had Becky done it? He holds the glass up to the light and looks at its cloudy contents. It is a hard-water area. Sadie had always said it made her hair fluffy. He had never said it didn’t. That her hair looked just fine. It was dark, no grays until she was in her late forties, and it shone with glimmers of light when she turned her head. Why hadn’t he told her how beautiful she was?

Is Becky guilty? Hmm. She’d been the only person there that night. And eight-week-olds weren’t mobile enough to have accidents. What other explanation can there be? He hopes for one, though. Some tragic explanation he can’t quite think of at the moment.

Her lawyer is under pressure, though: He can tell. He sips the water again. Sometimes, the lawyers look tense like that when their clients are innocent and they know it. But sometimes they just look like that when they’ve had a run of bad luck, tough cases. It’s hard to tell.

Well, what will be will be, he tells himself. The jury will sort it. He reveres them, these laypeople who are summoned, who give up their time for justice, who listen carefully and—pretty much always—return the right result, even when faced with the most complex of legal concepts.

He finishes the glass and gets the file out of his briefcase. Rumpole places his head on his lap, and Christopher shifts comfortably, content.

Now. Yes. To Becky’s history. He sets the papers on the arm of the sofa and begins to leaf through them. As he does, his hands still. He reads the words again and again.

Oh God, he thinks to himself. Oh God. Now, that changes things.

From THE GOOD SISTER. Used with the permission of the publisher, G.P. Putnam’s Sons. Copyright © 2019 by Gillian McAllister. 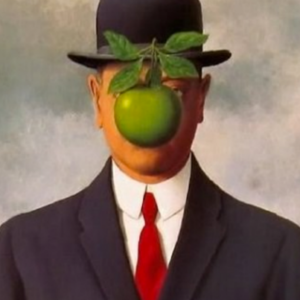 Art World Noir Ah, the art world. The phrase conjures up beautiful and expensive objects and their beautiful and rich owners wearing black...
© LitHub
Back to top