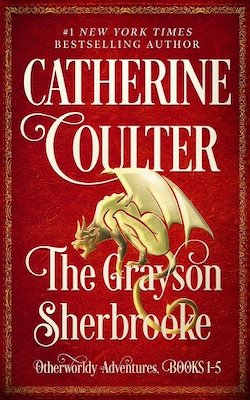 The following is an exclusive excerpt from The Grayson Sherbrooke Otherworldly Adventures, Books 1-5, by Catherine Coulter. Grayson Sherbrooke, a writer of popular gothic novels, also happens to investigate of bizarre events in real life Victorian Yorkshire. This volume collects the first five of his forays: "The Strange Visitation at Wolffe Hall," "The Resident Evil at Blackthorn Manor," "The Ancient Spirits of Sedgwick House," "The Virgin Bride of Northcliffe Hall," and "The Red Witch of Ravenstone Folly."

She jerked up in bed, wide awake, breathing hard and fast. The dream—this was the second time she’d had the identical dream. She was herself in the dream, and she was surrounded by a hazy sort of pale light that kept her from seeing anything clearly. It was as if she were in the middle of a long, foggy tunnel with a low humming all around her that slowly changed to a low voice that spoke quietly at first, all around her, then the voice became gradually harsher and louder, yelling at her. Then she came awake, sweating, terrified, and still not understanding what it was all about. The same sounds were in both dreams, and she realized this time the sounds were words, only they were garbled and distorted as if coming from a long way away, and she couldn’t make them out.

She pinched her arm—yes, she was awake. She was still breathing hard, her heart pounding. Had P.C. had the same dream again? She had to go to her, but suddenly, she was so afraid she couldn’t get spit in her mouth because the once-warm scented air was turning icy cold. She would swear she could see the air shimmering in the dim light cast by the half-moon from her window. What was going on?

She felt the first tremor, only a slight shuddering, and she saw her small writing desk slide across the floor.

What was going on here? She had to get to her daughter.

Miranda lit a candle, threw on her bed-robe and her slippers, and ran into the wide corridor, yelling her daughter’s name. She threw open P.C.’s door, but P.C. wasn’t in her bedchamber. Miranda ran back into the corridor and skidded to a stop when, suddenly, her candle went out, as if an invisible hand had pinched the wick, throwing the hallway into impenetrable darkness.

No answer. There didn’t seem to be another living person in Wolffe Hall, as if she were completely alone, but how could that be? It made no sense. She called out for the Great, her mama-in-law, the servants. No answer. And always as she made her way in the dark, feeling along the wall, she called out as she went, “P.C.!”

Miranda got herself together. “I’m here, love, walking toward the top of the stairs. I yelled your name—where were you?”

“I was trying to find you. Then I heard you shouting my name. Didn’t you hear me?”

She shook her head. She hadn’t heard a thing. Her daughter ran into her, and she hugged her against her side. “The dream came again, but now it’s more.”

P.C. had her arms tight around her mother’s waist. “It’s scary, Mama, really scary. Did your candle go out too?”

“Yes. I couldn’t find you, and it simply went out.”

Miranda felt something in the air itself, something black and cold, and it was building and building. She and P.C. heard a low growl of the voice, that same voice, so far away, but screaming the same words over and over.

“Mama, can you understand the words?”

Miranda got herself together. “No, I can’t, but it will be all right, P.C., because we’re going to leave. We’ll be able to see the moon through the downstairs front windows. Be careful. Come slowly, all right?”

“It’s like we’re the only ones in the house, but you know we aren’t.” P.C. panted out the words, pressing closer to her mother. “Mama, what about the Great and Grandmama?”

Miranda looked back up the stairs. With no light, the stairs quickly disappeared into inky blackness. “We have to try another candle.” Miranda ran into the library and fetched one of the Great’s candles. The flame flickered, but held. The air was so cold both of them were shivering violently as they walked back up the stairs, Miranda cupping the candle.

When they reached her mother-in-law’s bedchamber, Miranda turned the doorknob, but nothing happened. She twisted, but still, nothing. She pounded on the door, but there was no answer.

P.C. whispered, “Mama, where is she? Why is the door locked?”

Miranda pounded on the door again, threw back her head, and yelled, “Mama-in-law! Where are you?” And there it came, the voice from their dreams, not screaming, but low, a whispery faraway voice, muffled, as inside a tunnel, blurred, unintelligible. The same sounds over and over and it was coming from everywhere, closer and closer, like a circle drawing in tighter and tighter, swirling around them. It was becoming louder again, but they still couldn’t understand. Now the voice was shouting, but it was all confused, deep, guttural sounds.

They ran to the Great’s door. It was locked too, but Miranda yelled, “Sir! Lord Great!”

But there was no answer.

Mother and daughter huddled in the dark hallway, wondering about the servants, when they felt a small tremor as if from an earthquake, something neither of them had ever experienced, but instinctively recognized. Then the house began to shudder and shake around them. “Mama, we’ve got to get out of the house, now.”

Miranda knew she was right, but what about the servants? She took P.C.’s hand, and they raced to the bottom of the third-floor stairs. Both of them shouted, “Suggs! Mrs. Crandle! Marigold!”

Again, Miranda felt like they were alone. It was terrifying because it made no sense.

The air was colder now than it had been an instant before, and the slight tremors were coming more frequently. No hope for it. Miranda grabbed P.C.’s hand. “We’re getting out of this cursed house, away from that cursed voice.”

She clasped her daughter’s hand as they ran back down the hall to the main staircase. They paused, listened, but there was no sound of another person, nothing, only silence, dead silence, and the cold air and the growing tremors.

It felt like the hall would be ripped from the ground itself so violent was the shuddering. They had to get out, now. This was real, and it was terrifying.

Once again they heard the voice, and yet again it was low and blurred, enfolding them. “Ignore it.” Miranda pinched out the candle when they reached the head of the stairs, afraid the tremors would make her drop it. The thought of a fire was more frightening than the infernal shaking. They stepped off the bottom step into the entry hall and nearly fell into a gaping hole in the middle of the black-and-white squares, and it was spinning around and around. From where they stood, they could see no bottom.

She grabbed P.C.’s hand and ran around the black swirling hole to the front door. Both of them felt its pull, trying to jerk them in and go—where? To hell, Miranda thought, that black gaping hole went directly to hell. She unfastened the three locks and tugged. The massive door didn’t budge. Miranda pulled, and P.C. added all her weight, but the big lion’s paw knob wouldn’t move. The voice came again, behind them. No more gentle whispers, now it was loud, angry, but still they couldn’t understand what it was saying. Miranda looked over her shoulder. Was the voice coming from deep in that black hole?

Miranda pulled P.C. to the large window beside the front door and unlatched it. It wouldn’t push outward. It wouldn’t do anything at all.

“It doesn’t want us to leave, Mama,” P.C. whispered, so afraid, and the voice kept coming, so loud now their ears hurt.

Miranda screamed, “What do you want? What are you saying? We cannot understand you!”

Louder and louder, the same words or sounds over and over again, belching out of the abyss. Then the voice simply stopped and the tremors became great shudders and the black hole suddenly disappeared. Miranda grabbed the gilt Louis XVth chair in the entryway and slammed it against the window. There was a grunting sound, like she’d struck someone in the belly, then the window shattered, not outward, but insanely the shards flew inward, showering them with glass, and something hurtled them back, and Miranda would swear she felt breathing on her face, fast and harsh, and then a whisper, right in her ear, and she knew it was the same words, only she didn’t understand them.

Miranda couldn’t move, couldn’t think. She felt the pricks of glass shards, but ignored them. “P.C., are you all right?”

“Yes, Mama, maybe a small cut on my arm—I think that’s all. Whatever it is, it’s really mad at us.”

Miranda felt the welling of blood from a cut on her own cheek and wiped it away. The house seemed to tilt upward, throwing them back. Miranda grabbed P.C., pulled her tightly against her, trying to protect her, but the shaking hurled them into a table leg, and the vase of roses atop it went flying, striking the tiles, sending water and flowers everywhere.

“Hold on!” Miranda shouted. She buried P.C.’s face against her chest and closed her arms around her head. The mad convulsions went on and on. Miranda would swear she heard the voice shriek out a low moan and a part of a word—it sounded like hoos. What was a hoos? Or who was a hoos? No more, she simply couldn’t stand any more. She grabbed her daughter and staggered across the wildly swaying floor. She managed to lift her out the open window, climbed out after her, and they ran as fast as they could away from the shuddering house. 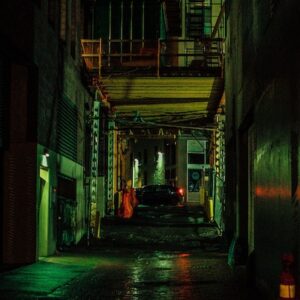 Sara Gran Considers The Art of Suspense The biggest part of writing is an art—having a point of view and the gift to express it. I’m not sure it can be taught,...
© LitHub
Back to top