The Greatest Wine Forger in the World

On Our Fascination with Scammers, Conmen, and Dupers of the Super-Rich

Just before dawn on the morning of March 8th, 2012, a team of a dozen FBI agents in bulletproof vests drove through the streets of Arcadia, California, 15 miles northeast of downtown Los Angeles, at the foot of the San Gabriel Mountains. Soon, they arrived at a white stucco house on Naomi Avenue, the home of Rudy Kurniawan.

Kurniawan was one of the world’s preeminent wine collectors and dealers. In 2006, at just 30 years old, he’d consigned a cellar to the house of Acker, Merral & Condit that set a wine auction record with a sale of $24.7 million. The source of his wealth and his wine was a mystery. There were rumors of a family fortune in Indonesia, where he was born. His collection was said to derive from a cache once owned by the French merchant, Nicolas. Kurniawan regularly played host at exclusive cellars and well-stocked restaurants like Cru in New York and Osteria Mozza in LA, where he covered the bill for hedge fund managers, wine barons, and auctioneers. He was a tasting room savant and a full-fledged oeno-socialite. He was also, as it turns out, a fake, one of the most prolific forgers in the long and storied history of high-class American scammers, which is why the FBI took him into custody that morning in March, 2012 and shipped him to New York City to stand trial on charges of fraud.

With the release of a new book chronicling this strange history (In Vino Duplicitas: The Rise and Fall of a Wine Forger Extraordinaire, by Peter Hellman), Kurniawan joins an illustrious, if not entirely proud, tradition. Confidence men have always held a special grip on our imaginations. The literature offers up a few different varieties. There’s the trickster with a twinkle of innocence and ingenuity, like Frank Abagnale, of Catch Me If You Can fame, whose memoir recalled youthful adventures in check fraud, commercial piloting, and Louisiana law practice. Or the brash outsider whose antics reveal a deeper corruption: think Jordan “Wolf of Wall Street” Belfort and his ilk. On the fictional side of things, there’s literature’s best-known forger, Tom Ripley, the outcast who wants desperately to belong and is willing to cross almost any line to get the life he believes he deserves. The adventurer, the crasher, and the striver.

Rudy Kurniawan bore shades of all three figures. Over the course of a nine-day trial in December, 2013, prosecutors from the Southern District of New York laid out his exploits and methods. Burgundy, by and large, was his wine of choice, although he dealt in counterfeit Bordeaux, too. The process was simple, though by no means obvious. With an American Express Black Card, Kurniawan bought elite bottles at retail from dealers and restaurants, then became intimately familiar with the wine’s profile, usually over the course of an expensive meal with high-profile acquaintances. Eventually, he began scooping up great quantities of very old bottles of mediocre wine. Armed with his connoisseur’s knowledge (his palate was undeniable) and a stock of young wines from California, he uncorked the old bottles and tinkered with the liquid inside, pouring some out, adding a little pinot here, shiraz there, until he had a decent simulation of the world’s most sought after vintages. The old labels were easily soaked off in the kitchen sink. For the new labels—the fakes—he set up a print shop inside his Arcadia home. The paper came from Indonesia and was browned and worn to meet expectations for wines almost a century old. Special waxes were imported, corks manipulated, and printing errors meticulously copied.

In short, Kurniawan had all the tools of a good counterfeiter—the print shop, the seals, access to buyers—but what really distinguishes a confidence man is his story.

In her 2016 book, The Confidence Game, Maria Konnikova, the author and New Yorker contributor, laid out the history and psychology of scams, from three-card monte to Bernie Madoff to the $190 billion a year credit card fraud industry. What Konnikova found was that nothing smoothed the way for a con like a good narrative. “When we’re immersed in a story,” she observed, “we let down our guard. We focus in a way we wouldn’t if someone were just trying to catch us with a random phrase or picture or interaction… The more extreme the story, the more successful it becomes. Emotions on high, empathy engaged, we become primed to help.”

Empathy was, in a sense, Kurniawan’s specialty. In In Vino Duplicitas, Hellman recalls the bacchanals that fueled the wine business in Kurniawan’s glory days—the freewheeling era before the 2008 financial collapse. In New York, the restaurants were Cru and Veritas. Both are now shuttered, but in those days, managers would gladly stay open all night while well-heeled groups dropped $8,000 on each bottle delivered from the cellar. Kurniawan’s customary move, according to Hellman, who was writing for Wine Spectator at the time, came at the evening’s close. Just when his companions thought the festivities were done, Kurniawan would produce one more magical bottle. Recounting one notable evening when, at the end of an extravagant tasting, Kurniawan went to his car for a bottle of Rousseau Chambertin 1923 (“both appellation and producer are supreme, the vintage excellent”), Hellman describes guests’ rapture at tasting the burgundy’s “silky kiss,” as well as Kurniawan’s manner as he poured one of the world’s premiere libations: “[He] avoided lording it over the recipients of his costly bounty. He wanted you to share the pleasure, and did not seek gratitude. And so gratitude is what he got.”

Kurniawan’s story was about grace and companionship, appetite and largesse. Who wouldn’t want to be a part of that? Who but a world-class prick would drink a fine wine from a respected host and think, “sure that kiss was silky, but was it authentic?”

Now, you might be inclined to think those were in relative abundance—world-class pricks. Kurniawan’s actions caused damage across the wine industry, from auction houses to banks to the growers whose reputations he sullied. But mostly his victims were collectors, insanely wealthy men who subscribed to a few more or less insane beliefs: namely, that on this earth were bottles of drink worth many thousands of dollars, that their mouths could distinguish that drink from hundred dollar swill, and that, by God, the more of the stuff they could keep in their basements, the better.

(This simplifies wine collecting, surely, but reading Hellman’s account—the account of a genuine wine lover and a sophisticate—you can’t help but conclude that the industry, like many that cater to the uber-wealthy, is built on illusions and wishes.)

But being rich and powerful doesn’t make you immune to the confidence man’s charms. If anything, collectors of rare goods are the perfect marks: confident in their own expertise but desirous to the point of greed. That, and they know how to spend.

Kurniawan largely shared his victims’ beliefs and their lifestyle. He bought wines at record-breaking prices. He spent lavishly, burying himself deep in debt. In a sense, his story was genuine, if not true. He plainly wanted to be the man he seemed to be.

For Hellman, the history of Kurniawan’s rise and fall brings to mind another figure from the canon of confidence men, perhaps the greatest of them all: Jay Gatsby. In Fitzgerald’s words, Gatsby “sprang from his Platonic conception of himself. He was a son of God—a phrase which, if it means anything, means just that—and he must be about His Father’s business, the service of a vast, vulgar, and meretricious beauty.”

The analogy is almost too perfect. Wine has beauty, no doubt, enough to rival any collection of tailored shirts or rare books with their uncut pages. And at $8,000 a pop, what could that beauty be but vast, vulgar and meretricious?

Reading about con artists like Gatsby and Kurniawan serves up a twin thrill, much to our discredit, perhaps. First, we get proof for our niggling suspicion that the haves of this world are full of shit. But we also get to imagine that one day, with a bit of cleverness—a pen stroke, wax, the right credit card—we, too, could be full of shit.

Kurniawan is currently serving a ten-year sentence at a privately run federal prison in California, at the southern reach of the San Joaquin Valley. He declined to testify at the 2013 trial and opted not to speak with Hellman before the publication of In Vino Duplicitas. Late in 2015, however, the US Marshals Service auctioned off what was left of his wine collection. The marshals made their best effort to separate the real wine from the fake, but ultimately buyers were warned no guarantees of authenticity could be made: caveat emptor. The wine brought in over $1.5 million.

Even when the grifters end up face down in a Long Island pool, adrift in the Ionian, or locked up in a California prison, the stories still manage to hold us in their grip. 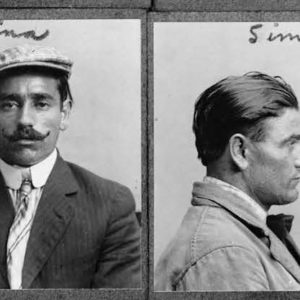 Documenting a crime—never a simple task whether for evidence, publicity or posterity—requires a balance of science and art....
© LitHub
Back to top