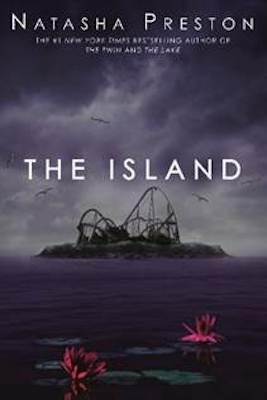 The following is an exclusive excerpt from The Island, by Natasha Preston, forthcoming in February 2023. In this pulse-pounding YA thriller, six influencers are invited to an exclusive experience on a remote island meant for the vacations of the super-rich. But will the teens ever get off the island alive?!?

I upload my latest trailer to TikTok advertising my new YouTube video Killer in the Family and sit back. Within seconds the numbers under the little heart start climbing like if Jeff Bezos was to watch a live stream of his bank balance.

Tearing open a packet of Hershey’s Kisses with my teeth, I wait. Chocolate passes the time. I get a bunch of comments telling me how awesome it is that I’ve posted but it’ll take about thirty minutes for people to head over to my YouTube channel to watch the full video then come back to TikTok to let me know what they think.

My hardcore followers comment on both. Then Insta too.

I can wait. If I go downstairs right now, I’ll just hear my parents arguing over Malcolm’s invitation.

That invitation might just be the single coolest thing that has ever happened to me, without exception, and they’re not certain they’re going to let me go.

When dad initially said no, I thought I was going to pass out. I was lightheaded and everything.

There is no option: I have to go.

Things got so desperate I even had to send an SOS to my brother in college to call Dad and fight in my corner. Blaine is much better at wrapping our parents around his little finger. It helps that he’s a literal genius and gives them excellent bragging rights.

If anyone can convince them, it’s him.

How will I be able to look at myself in the mirror if I have to stay home that weekend while someone else takes my spot?

I’m getting on that island, even if it kills me.

Only six of us have been invited. Six influencers. An exclusive weekend on a new island resort. An amusement park so remote and exclusive that you can only reach it by boat.

The owner, Malcolm, wants us to endorse it. Influencers are taking over the world. If I hadn’t accidentally made it big, I might be a little despaired by that fact.

People listen to someone online they’ve never met more than they do their parents, teachers, doctors. It’s tragic really, but I’m not complaining. I’ll be able to go to a top college and leave without any debt. I can buy a house when I’m done.

I’ve already got a brand-new BMW that my brother was so jealous about. It was glorious. His was two years old when our parents bought it.

I lean back in my office chair and peel the wrapper off a chocolate.

The count climbs. When it reaches over one hundred thousand in minutes, I lock my phone, and go to eavesdrop on my parents.

I’ll come back in a bit to see what people are saying.

Mom and Dad are still debating when I leave my room, as I expected. It’s been two days and my trip is all that’s been discussed. I tiptoe along the hallway and listen to Mom tell Dad that spending a weekend with other successful influencers who aren’t focused on murder might ‘do me good’.

Ellie is my thirteen-year-old cousin. She’s constantly glued to her phone watching some TikToker named Ava dance and vlog about beauty tips, hacks, and tricks.

“I don’t think that’s going to happen, Cheryl. She’s obsessed with this death stuff. We don’t know anything about this place or this billionaire who’s invited her. It’s perverse. Who does he think he is asking my seventeen-year-old daughter to his island for the weekend?”

“Oh, Jeffrey, be real. Malcolm Wyatt is completely legitimate. And this trip? This is what being an influencer is. There’s a group of them, all around her age. And a woman . . . Camilla something, will be their chaperone while they’re there.”

Camilla Jenkins. She’s Malcolm’s personal assistant and is apparently the one who’s coordinating everything. She’ll be watching out for us until the boat picks us up on Monday lunchtime.

“Don’t you see an issue with the fact that you’re only pushing for this in the hope she’ll come home and start doing dances online . . . or whatever it is these kids are posting?”

I close my eyes and cringe. Lord, shine a light.

“Even Blaine agrees with me,” Mom says. She’s smug, I can hear the triumph in her voice. Dad will be rolling his eyes.

See, he’s their golden child. He’s the one not reporting on crime in his spare time.

“Oh, you know he can never say no to her. He’ll agree with whatever she wants to do. Besides, this isn’t up to Blaine.”

Oh, yeah. My brother might be their golden child, but he’s always had my back and let me get my way.

“Forget Blaine. This is about Paisley. It’s a great opportunity for her, Jeff. It’s no secret that I don’t love what she does, but we can’t argue that it’s taking her places. She’ll make some good connections.”

She’s probably referring to the billionaire.

There’s a couple of millionaires on our street but anything beyond that is blocks away, deep in the posh suburbs. This kind of money isn’t part of my world. At least not yet.

Dad’s sigh travels up the stairs. That’s his sigh of resignation. I know it well. It’s the same one I heard after Blaine and I spent a week of pestering him for a puppy. Bailey, our sweet lab, is asleep on my bed.

Yes! I leap into the air in a silent celebration, punching my arms above my head.

I take out the invitation from my hoodie pocket and leap again.

At the end of the month, I’ll be spending a whole weekend on Jagged Island.

8 True Crime Podcasts You Need to Listen to this Winter 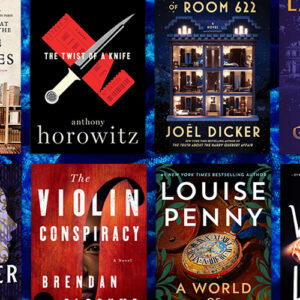