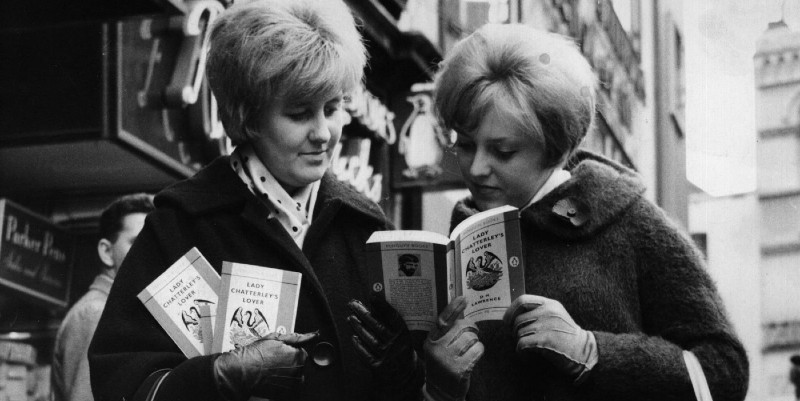 In 1960, Penguin was on trial for publishing a paperback edition of Lawrence's classic. The prosecution asked the jury to ponder a very revealing hypothetical.

Mervyn Griffith-Jones’s question in the Lady Chatterley’s Lover trial is the most famous self-inflicted wound in English legal history. Prosecuting Penguin Books for publishing D. H. Lawrence’s novel three decades after the author’s death, Griffith-Jones asked the jury how they would feel having the novel lying around at home: “Is it a book that you would even wish your wife or your servants to read?” Griffith-Jones was used to cutting an intimidating figure in court. He had prosecuted Nazis at Nuremburg. But when he asked this question jurors laughed. Griffith-Jones had talked past the three women in the jury box, and by 1960 very few British families employed live-in servants—certainly not the retail and manual workers on the jury. It was a moment whose significance was clear to those who had secured one of the sought-after places in the gallery. An American writer turned to the English novelist next to him and said: “This is going to be the upper-middle-class English version of our Tennessee Monkey Trial.” 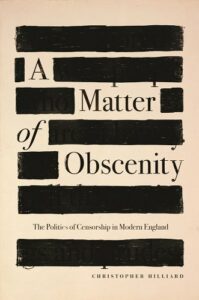 Griffith-Jones certainly was out of touch, but his argument would have been familiar to anyone who followed obscenity trials. Griffith-Jones repeatedly drew the court’s attention to the low price of the paperback edition of Lady Chatterley’s Lover. He made it clear that a paperback that working-class people could afford was an altogether different proposition from an expensive hardcover for scholars or collectors. This distinction— “O.K. in vellum and not O.K. in paper,” as one contemporary summarized it before the trial—had a long pedigree. Publishers knew the score. In the late nineteenth century daring French novels appeared in deluxe editions to show that the publishers were not actively courting working-class readers. This is an instance of what Ian Hunter, David Saunders, and Dugald Williamson have called “variable obscenity,” the idea that a book’s acceptability depends on who is reading it as well as the book itself.

English obscenity law bore the imprint of Victorian debates about literacy and citizenship. The leading case on obscenity dated from 1868, months after the Second Reform Act extended the franchise to working-class men who met certain conditions. When Victorian intellectuals considered the implications of mass literacy their thoughts often strayed to the issue of suffrage. The question of how wisely working men used their literacy intertwined with the question of how responsible they would be as voters. One observer called literacy “the literary franchise,” playing with the idea that the ability to read and write was itself part of being a full citizen. Successive attempts to widen the electoral franchise wrestled with the question of what level of rent or income tax liability could serve as a proxy for the self-mastery required for the vote. Judges and prosecutors dealing with offensive books made analogous calculations. Obscenity law took income or wealth as an indicator of the responsibility a reader would need in order to avoid being corrupted by sexually frank books. Titles that might be tolerated in expensive limited editions risked confiscation if they were published in mass-market formats easily available to readers supposed to have weaker defenses than middle-class men.

Officials, all of them men, worried about female readers too, but while price could divide readers on class lines, there was no equivalent device for keeping a book out of the hands of women while leaving it available to men. Keeping bad books away from women could only be the responsibility of the steady male head of a household. That patriarchal duty carried over from private life to jury service. Jurors’ wives and teenage daughters were often invoked in obscenity proceedings as people the law was supposed to protect. While the democratizing currents of the 1920s and 1930s made it dangerous for politicians to utter bald class judgments, and while slurs on women’s mental and moral capacity later became risky too, the law remained a safe space for these attitudes for much longer. Griffith-Jones was not simply a throwback; his question was a glaring example of the way the timeframes of cultural change are not always in sync.

The prosecutor’s misjudgment created an opportunity to challenge these assumptions and the defense seized it. “The whole attitude is one which Penguin Books was formed to fight against,” the defense counsel, Gerald Gardiner, declared, continuing, “This attitude that it is all right to publish a special edition at five or ten guineas, so that people who are less well off cannot read what other people do. Is not everybody, whether they are in effect earning £10 a week or £20 a week, equally interested in the society in which we live?” The jury acquitted the publishers, whose case was helped greatly by the Obscene Publications Act passed the previous year. The new law enabled defendants to argue that, though it was explicit or offensive, a book had literary merit and publication was for the public good. Gardiner called a procession of literary critics and other eminences to testify about the value of Lawrence’s novel. At the same time as he asked the jury to endorse freedom of expression he asked them to defer to experts. The Obscene Publications Act of 1959 was the result of years of lobbying by authors to carve out a protected space for literature. Erotica from Paris and comic books from across the Atlantic were entitled to no such protection. Freedom for what was deemed literature was premised on restrictions on porn and pulp.

The Lady Chatterley’s Lover trial’s synthesis of democratization and deference unwound within a decade. By the end of the sixties, the law was under attack from a new cohort of morals campaigners. And the anticensorship forces were now less likely to accept the distinction between art that deserved protection and trash that didn’t. There was a shift from anticensorship arguments based on the special status of literature, or the need to test opinions in a marketplace of ideas, to seeing the freedom to read and write as an end rather than a means. This change was part of a more general move away from deference and conformity—the elaboration, as the historians Deborah Cohen and Jon Lawrence have shown, of traditional norms of privacy into an expansive ethos of personal autonomy and choice. The philosopher Bernard Williams, chairing a committee that reviewed censorship in the seventies, spoke of a society capable of supporting pluralism rather than consensus.

People who wrote to the Williams Committee explaining how they felt about censorship extrapolated from conventions of neighborly conduct—if you “kept yourself to yourself,” other people would let you be—to arrive at a homespun version of the liberal principle that consenting adults could do as they wished in private, as long as immorality was not on public display. Others cited John Stuart Mill’s precept that people should be free provided their exercise of their freedom did not harm others. Many of those campaigning for personal freedoms in the sixties and seventies saw themselves as engaged in a struggle against the vestiges of Victorian morality, but this was also a struggle that pitted Victorian liberalism against supposedly Victorian morals. The gay-rights campaigners and porn magnates who quoted Mill to the Williams Committee were not necessarily Victorian liberals at heart: rather, the takeaway version of On Liberty was supple enough to articulate rights claims in a time of rapidly changing personal and cultural expectations. If you wanted to engage with authority on its own terms, that is. Feminists tended not to invoke Mill; punks did not make submissions to official inquiries.

Censorship has been an arena where ordinary people and officials alike wrestled with social change—from the growth of literacy and democracy to second-wave feminism and gay rights, multiculturalism, and the impact of the internet. For a long time English obscenity law reflected uncertainties about what could be said—and, crucially, how and to whom—in a changing society. This is as true of the 1860s as the 1960s. The law evolved—and didn’t evolve—as modern literature and popular culture took shape. The subjects of cases and controversies included penny dreadfuls, unexpurgated classics, “sex-problem” novels, risqué postcards sold in seaside resorts, modernist fiction, comic books, gangster novels, handwritten erotica, pornographic playing cards, avant-garde plays, television documentaries, pornographic magazines, the underground press, 8 mm films, horror movies, sex education, videocassettes, and online pornography. Many of these cultural forms were imports, the products of an increasingly international culture industry. Obscenity law was, among other things, a membrane through which foreign influences were filtered.“

Excerpted from A MATTER OF OBSCENITY: The Politics of Censorship in Modern England by Christopher Hilliard. Copyright © 2021 by Princeton University Press. Reprinted by permission.”

Christopher Hilliard is professor of history at the University of Sydney. His books include The Littlehampton Libels: A Miscarriage of Justice and a Mystery about Words in 1920s England and To Exercise Our Talents: The Democratization of Writing in Britain. Twitter @chrhilli 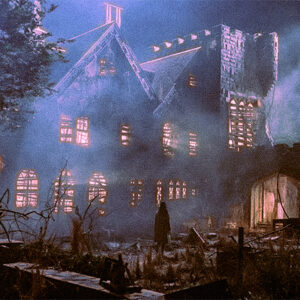 I have always been sort of obsessed with the idea that a house can be a character. Judging from the number of people who watched...
© LitHub
Back to top