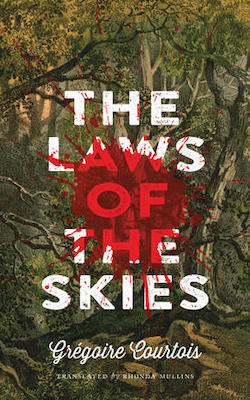 The following is an exclusive excerpt from The Law of the Skies, a terrifying novel by France’s Grégoire Courtois, translated by Rhonda Mullins, which finds a class of six-year-olds on a camping trip. But nature is even scarier than their campfire stories, and fatal dangers begins to mark their adventure.

The bat story was starting to seriously get on Enzo’s nerves. They had been promised scary stories, with monsters and ghosts, whispered around the fire in the groans of the night. Instead, they were stuck with a stupid moral fable, the end of which, there could be no further doubt, would laud the tenacity and self-denial of the brave little rodent, who rejected the inevitable, despite it all. Pathetic, was how Enzo summed it up in his mind. His father had always told him, and his father knew what he was talking about: you shouldn’t get big ideas. Imagining you can change the world when you come from the bottom, imagining you can fly when you are just a garbage-eating rat, is not just pointless; it’s painful to have to bang your snout against all the walls of a labyrinth that can’t be cracked.

I mean, what is going on in this guy’s head? Enzo thought. If you’re a mouse, have fun with your mouse friends, tease them, shove them, bash them about the head until they fall into line, and become the mouse king, a king without a crown, the undisputed king, the one who does whatever he wants, who never lets anyone step on his toes or lay down the law. Living this good life, why would you want to fly? And why suffer so long without being sure of the result? Pathetic, every last one of them, Enzo sniggered, raking the embers of the campfire with a dead branch.

Imagining you can change the world when you come from the bottom, imagining you can fly when you are just a garbage-eating rat, is not just pointless; it’s painful to have to bang your snout against all the walls of a labyrinth that can’t be cracked.

There: the tip of the branch finally went up in flames. He pulled it out of the fire and considered the flame dancing on the end of the stick. Mathis and Hugo were taking their time coming back from the bathroom, and Lucas was using the opportunity to strut about, saying that he was clearly the smartest in this class, since he had so quickly figured out the tale. Unnoticed, Enzo had moved the flaming stick in Lucas’s direction, perhaps not to hurt him, but at least to put an end to his tiresome monologue. The little flame slipped under Lucas’s thigh – he was sitting cross-legged – and in a few seconds, the leg of his pyjamas had started to smoke. The faint feeling of heat changed into a slight pinch and, once his brain had made the connection between the thin wisps of smoke and the pain on the back of his thigh, Lucas jumped up, screaming and stamping his feet, his hands frantically slapping his thighs, his torso, and his bum, as if he were afraid he were already a human torch. The event provoked two different reactions among the children: some of them couldn’t help but laugh at the ridiculousness of the scene; others were yelling and gesticulating, not knowing why, or perhaps to finally release the pressure and the terrors that the night had bubbling up inside them. Enzo was the only one who was stoic, smiling through the chaos, looking satisfied with his piece of choreography, a look that wasn’t lost on Fred, as the teacher leapt on his pupil, blanket in hand, to put out the pyjama fire. Alerted by the noise of the shouting, Mathis and Hugo rushed back from the toilet to find the camp’s calm restored, their classmates gathered around Fred, who was examining Lucas’s minor burn.

But no one heard him. Much more than for the end of the story or Enzo’s umpteenth rude remark, Hugo was impatiently waiting for Sandra to come back to tell him his mother was fine or, at least, that she was on her way to the doctor’s, who would soon make her better. But Sandra hadn’t come back to camp, whether of her own volition or not.

It wasn’t that complicated, she thought, stumbling on the uneven path; she just had to go straight, then turn right near the big pile of rocks. But it was dark now, and without a flashlight, the only source of light being the screen of her phone that she had to keep turning back on, maybe she had got the wrong pile of rocks and hadn’t turned at the right place. But it wasn’t that serious. She would just have to double back until she reached the right junction. She knew that the forest roads were laid out in a grid, so finding the way was never that hard and, in the worst-case scenario, she could always call Fred. But what would she say? She was less and less sure of where she was. Was she getting closer to camp, or farther away? In the faint halo from the cellphone she was holding up in front of her, she wondered whether this trail was really taking her deeper into the forest. Or had she inadvertently left the waymarked routes and ended up blindly following a trail like the one the deer, foxes, and boars had cut through the tangle of the underbrush? If her feckless husband hadn’t done what he did, she wouldn’t be here, she thought. If she hadn’t spent the first hundred or so metres of her return trip mentally tearing a strip off him for having gotten hammered as soon as her back was turned, she would definitely have been more focused and would have had no trouble finding the goddamn pile of rocks. What an idiot, she thought, I mean, what an idiot! That was pretty much what Enzo was thinking too, when Fred had escorted him to his tent, ordering him to bed for the night in front of his classmates, since he was now being punished, deprived of the end of the evening.

‘Whatever. Your story was dumb,’ Enzo spat as a final taunt.

Donald Goines and the Birth of Black Pulp Fiction

7 Creepy (Fictional) Couples Who Will Send Shivers Down Your Spine 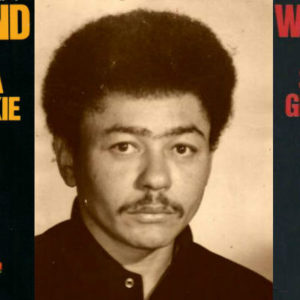 Donald Goines and the Birth of Black Pulp Fiction Donald Joseph Goines was born on December 15, 1936, in Chicago. Father Joseph and mother Myrtle were hardworking migrants...
© LitHub
Back to top