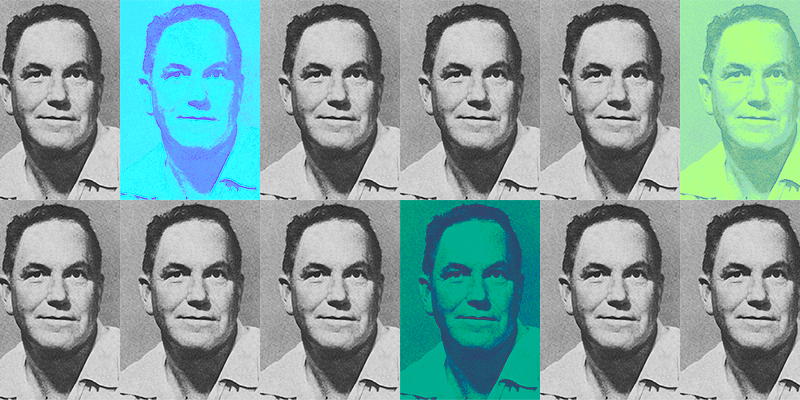 I’ve never forgotten what John Huston wrote about the work of W.R. Burnett—“There are moments of reality in all those books that are quite overpowering. More than once they had me breaking into a sweat.” When I think of the crime novels of Charles Williams, I know exactly what he means.

Williams could write terrifying suspense stories that, over fifty years on, remain almost unbearably gripping. He’s had my heart pounding as his protagonist narrowly escapes murderous criminals, vengeful cops, or sometimes both (in a classic Hitchcock-style double chase)—as in Man on the Run. At times the tension in that book became so unbearable that I just had to set it aside for a couple of minutes. 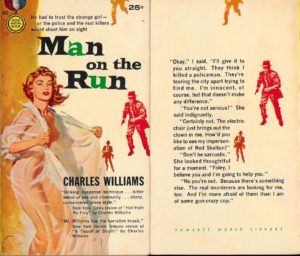 Before I read my first novel by Williams, I was peripherally aware of his work from two film adaptations, The Hot Spot and Dead Calm. Indeed, I finally picked up a book because it too had been made into a movie, a rare and obscure film noir that I love—The Third Voice.

The source material was Charles Williams’s All the Way (1958). This novel immediately reveals Williams as an exceptional writer, his prose showing great economy and understated beauty—“We sat forward under the canopy to avoid the tatters of spray as the Blue Runner knifed into the light ground-swell.” The Blue Runner is of course a boat. Williams, like John D. MacDonald, wrote a lot about boats and life on the water. And, like MacDonald, he often used Florida as his setting.

The ocean is a key theme in Williams’s writing—in All the Way a murdered man ends up far down in its depths, “in the gloom and the everlasting silence, with his chest crushed by the pressure.” But Williams writes evocatively about it at all times and in all moods—“the surface of the bay burned like molten glass in the sun… It had rained during the afternoon, a slashing tropical downpour that drummed along the deck and pocked the surface of the water… I stared out at the water with its hundred gradations of colour from bottle green to indigo.” 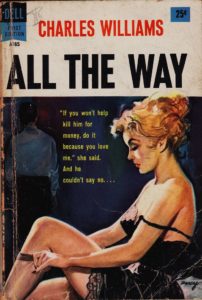 Another key Williams theme is the femme fatale. In All the Way she is the superbly evoked Marian Forsyth. “The blue eyes were coolly satirical… she was unbelievably exciting…. the slender patrician face with the long lashes like soot against the skin.” Dealing with Marian, our hero feels like “an oaf at a county fair.” Eventually, when she diffidently succumbs to his advances she does so in “rather the way you’d buy a potato peeler from a salesman to get rid of him.”

In A Touch of Death we have Madelon Butler with “a magnolia complexion and big, smoky-looking eyes.” Her partner in crime is Lee Scarborough, an ex-college football player. When Madelon makes a reference to Homer’s Odyssey and Lee doesn’t get it, she rather cruelly remarks, “I guess they haven’t made a comic book of it yet.”

Sometimes you get two femmes fatales for the price of one. In Man on the Run we meet Suzy Patton, “as big and vital as a Viking’s dream.” Suzy’s “hardboiled grey eyes were alight with interest” as she works out how to track down the mystery Latina woman who’d framed Russell Foley for the murder of a cop. Prompting her priceless observation, “The brunette being stalked by her only natural enemy.”  (Suzy is a blonde.)

Williams writes women well, but even by his standards Suzy Patton is an extraordinary character. Man on the Run is gripping, witty and thrilling in the extreme, with a strong line in sardonic humour. The apartment where Foley had a fight with the late cop looks like the two of them “had been playing polo on bulldozers.” And when Foley asks if a drowned man was murdered, the laconic response is, “Yeah, unless he always went swimming with a Ford transmission tied to his leg.” 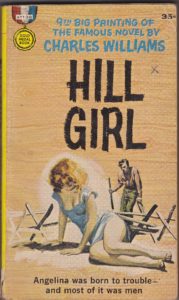 Charles Williams’s first book, Hill Girl, appeared in 1951. It sold a cool two million copies for the pioneering paperback imprint Gold Medal. Hill Girl had previously been rejected by hardcover publishers despite the fact that “the writing was exceptionally good” because the plot was deemed “to be too commercial.” (I’m not kidding. These reminiscences are from Williams’s agent, Don Congdon.)

Twenty more novels followed, ending with Man on a Leash in 1973. I haven’t read all of these yet. I’m going through the list slowly, savouring them rather than devouring them. After all, when they’re gone they’re gone… Although of course there will always be the pleasure of rereading.

Charles Williams, however, really is gone. He died in 1975 at his own hand, grieving for the loss of his wife and also the slow extinction of his career. The kind of brilliant standalone novels Williams wrote had fallen out of fashion. Millions of copies were still being sold in the crime and suspense genres, but chiefly as installments in the adventures of series characters like Shell Scott, Matt Helm, Lew Archer, or Travis McGee.

Williams declined to create his own recurring series protagonist, apparently saying he’d find it a bore (despite having written two novels about John Ingram—Aground and Dead Calm). Which is a shame from all points of view. A more prolific and longer lived Charles Williams would have left us with a greater bounty of superior fiction. But what we have remains invaluable.

Besides Man on the Run and All the Way, I’d highly recommend The Sailcloth Shroud, with its scene in a police morgue like the “grisly filing cabinets of a city’s unclaimed and anonymous dead,” and in which the cops advise the hero to come clean with them “before you wind up in an alley with the cats looking at you.” 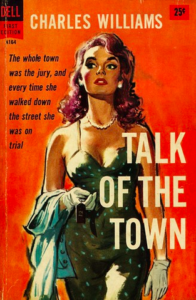 I’d also recommend Stain of Suspicion (aka, Talk of the Town), an addictive suspense novel in a vividly imagined small-town Florida setting (“Shadows were like ink in the white sunlight”) where Bill Chatham, an embittered ex-cop from San Francisco, finds himself stranded after a car crash. He is soon reluctantly caught up in defending Georgia Langston, a beautiful young widow, against shadowy persecutors. Such as the anonymous voice muttering obscenities over the phone, “like something crawling across your bare flesh in a swamp.” The pressure is starting to tell on Georgia. “One of these days she was going to come apart like a dropped plate.” But not if Chatham can help it…

One of the virtues of a Charles Williams novel is you have no idea from the outset what kind of story it will turn out to be. Perhaps the protagonist will heroically defend an innocent woman and triumph against savage wrongdoing. Or, alternatively, he may be captivated by a gorgeous sociopath and join her on a campaign of murderous crime that looks set to destroy them both.

Similarly, Williams will keep you guessing about the ultimate fate of his hero. Sometimes the poor guys ends up trapped in a fiendishly ingenious film noir purgatory. Sometimes both he and the girl of his dreams survive against all odds, only to part company in the most ironic and offhand of ways. Sometimes they get to live happily ever after. Together. But you’re unlikely to be able to predict which.

The word genius is applied far too liberally, so I’ll just say that I was profoundly shocked to realize that a writer of Williams’s stature and quality had been in (and out) of print for more than half a century and I’d hardly been aware of his existence. I’m sure as hell aware of it now.

In All the Way Williams describes a criminal conspiracy so meticulously planned that “It all fitted perfectly, like the stones in an Inca wall.” The same could be said of the construction of his superlative novels.

I’d love to say my own writing has been influenced by Charles Williams—he’s the finest teacher any crime or suspense novelist could wish for. But I’ve only just discovered his work. From now on, however, he’ll be joining John D. MacDonald, Thomas Harris, Charles Willeford and Cornell Woolrich in my own personal pantheon. 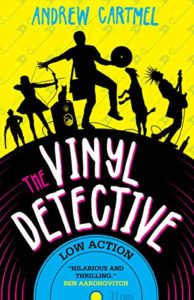 (All the quotes are from Williams’s novels as indicated, except for John Huston on W.R. Burnett, which is from Huston’s autobiography, An Open Book, and the ones relating to Don Congdon which are from Ed Gorman’s article “Fifteen Impressions of Charles Williams” which appeared in The Big Book of Noir edited by Gorman, Lee Server and Martin H. Greenberg.)

Andrew Cartmel is the author of the Vinyl Detective series of crime novels, the fifth of which, Low Action, is published by Titan Books in August 2020. He lives in London with too many books, too many records and just enough cats. 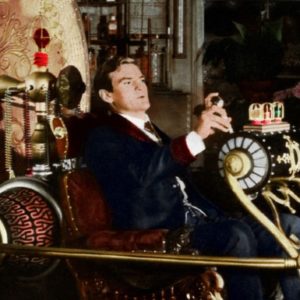 H.G. Wells was not the first author to explore time travel as a literary device, but he popularized the concept in ways that...
© LitHub
Back to top