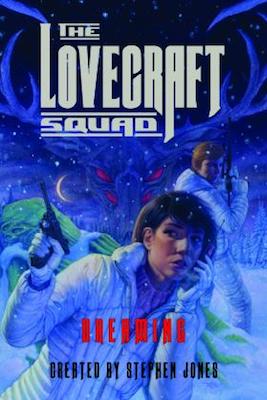 The following is an exclusive excerpt from The Lovecraft Squad: Dreaming, the third in the Lovecraft Squad series, created by Stephen Jones. In the following passage, we read from a 17th century diary in which sailors set foot on a mysterious island full of unspeakable horrors to collect an unnatural relic.

October 6th. On this day we made landfall at the Island which has no name and is not marked on any map. We found an inlet where we could drop anchor and enjoy shelter from the winds. There was but a small beach of grey-green stones where our boats could land, and from there I saw an ancient stepped causeway which wound upwards through the rocks into the centre of the Island. I was for going ashore, but Master Moreby prevented it. He sayd that I and my crew should remain aboard to conduct repairs, but that he would lead a party ashore from among the passengers who would presently bring back to the ship casks filled with fresh water, meat, provisions, and other necessary things for the completion of our voyage. I was much amazed at this, but knew better than to raise objection, for Master Moreby hath a way of looking at one that quells all protest. Among those who went ashore were Martha and Mercy Edwards, and I thought they went with an ill-grace, but I had little reason or power to prevent them.

October 7th. The party is returned from the Island, bringing with them our barrels filled with fresh water, and other provisions, including some herbs and roots, many great crabs gathered from the shore, and two carcasses of fresh meat. When I did ask from what animal came the carcasses, they replyed that they were piggs with which the isle abounded. On my remarking that I had never seen piggs of such length and leanness, Master Moreby sayd that these creatures were native to the Island and nowhere else to be found. Then I and all my men came ashore and made a fire on the beach, where we roasted the piggs on spits and made merry, for it was a long time since we had been able to feast with such abundance. The meat was very good and, especially that from the smaller of the two carcases, most tender, sweet and flavoursome.

On this day we made landfall at the Island which has no name and is not marked on any map.

But I noticed that Master Moreby held aloof and would eat nothing but a few pot herbs and dried fruit, and when I asked him the cause, he sayd that his needs were simple and that he made a practice at all times to live on little. Then I saw that Martha and Mercy Edwards were not of the company, and he told me that they were weary of the sea and had resolved to stay on the Island and convert the natives—if such there be—to the true religion of Christ and make it their home. But I did not altogether believe him, though I sayd naught, and was very troubled in my conscience at it.

October 7th (later). This day I thought we might set sail, but Master Moreby came to me and sayd there was one thing most necessary to be done, and for this he required the strength and skills of myself and my men. He told me that at the top of the Island was a black stone which he wished to be removed and placed in the ship to take to the Americas. He sayd that it required the strength and skill of my men to transport this object by means of ropes and other devices. I protested most strongly that neither I nor my men were contracted to service the random desires of anyone aboard and that, besides, I knew not if my vessell would sustain the weight of such an object. Then Moreby stared at me and sayd that any disobedience to his commands would go very ill with me. He sayd, moreover, that if it were known widely that my men and I had tasted of forbidden flesh, I should suffer the hatred of all the world. Angrily I asked him what he meant, but he, remaining silent, eyed me as before, and I knew, to my everlasting shame, what he meant. I therefore gave instructions to my men, who were much astonished by my commands, but made no murmur of complaint. And so, with six of my crew, a quantity of rope, and other necessary accoutrement, I stepped ashore once again, accompanied by Master Moreby and a few of the more able-bodied passengers.

I had had occasion to remark the strangeness of the Island, even on slight acquaintance; now, on venturing further in, I was struck most forcibly by the alien and unnatural quality of its features. The rocks of which it was chiefly composed were of a greenish hue, but not from moss or vegetation, but like the verdant marbles, so highly prized by the men of Italy. Yet I have never seen such stone in such abundance before, and it seemed to have been shaped by cunning hands. We followed a path of smooth flat stones, like the pavement of some great palace or temple, which led ever upwards between great clefts in the rock.

I noted but few plants growing there, and saw no creatures, not even so much as a sea bird, but nevertheless the isle was full of voices. Strange cries echoed among the surrounding stones, and yet not like the voice of any man or beast that I have heard before. It filled me and my men with a great dread, so that I asked Master Moreby what they might be. He replyed that they were not the cries of man or beast but were caused by the exhalation of air through holes and clefts in the rock, and that these exhalations came from very deep caverns beneath the Island. I could scarce credit his observation, but held my peace.

As we wound upwards, I began to see many curious signs and figures carved into the surrounding rocks. Again, in wonderment, I asked Moreby what these might be, and he told me that these were marks left by a very ancient people, but would not say aught further.

I had had occasion to remark the strangeness of the Island, even on slight acquaintance; now, on venturing further in, I was struck most forcibly by the alien and unnatural quality of its features.

At length we arrived at the summit of the isle, where upon a kind of platform of stone stood a black rock, smooth and polish’d, carved into a conical pillar with its topmost part level and with many strange devices inscribed upon it. Upon the topmost part of this black stone was a carven figure which struck me with much confusion and terror, for it was very like the image that I had glanced in Master Moreby’s great book. It was crouched upon a seat of alabaster, though it was composed of smooth stone of a dark green like the deep shade of a cypress tree. Its eyes were made of milk-white moon stones, and all manner of writhing serpents flowed from its hideous visage as if they were limbs. The skill and art of the limner had truly been put to the service of Hell itself on making that image.

Master Moreby commanded that this monstrous object be taken down from its pinnacle and transported most reverently to the ship. My men professed the greatest reluctance to have anything to do with the removal of this Hellish and Heathen idol, but Moreby was insistent and I promised goodly measures of strong drink to those who would aid us in this endeavour. My men obeyed, but with a very ill grace.

As the idol (as I may call it) was being taken down from its exalted post, I heard many murmurs and strange cries among those on our passage who had come up with us to this place. One of them, known to all as Mother Demdyke, a most pestilential ancient, lifted up her skirts and began to dance, cackling and keening as she did so. Few fouler spectacles have I ever beheld than that toothless crone capering on the summit of such a barren and accursed isle, but her other companions paid no heed.

The idol was lowered into a kind of wooden chariot our carpenter had devised for transporting it to the ship. When this was done, we must perforce handle the black stone itself and this, being heavier and greater in size than the idol, excited more complaint, yet we succeeded. One thing I noted as it was being removed was that, at its base, the stones round about it were darkened by a reddish substance, as it might be blood. I remarked on this to Master Moreby, but he told me in a very sharp voice to attend to my appointed task.

And so the thing was done, and those two stones were safely stowed aboard, but with much ado so that when it was done it was dawn of October 8th. At once Moreby commanded me to set a course, and gave me instructions as to which. I had no choice but to submit to his demands.

Excerpted from “Prologue: The Black Ship” by Reggie Oliver, which appears in The Lovecraft Squad: Dreaming, the third in a series created by Stephen Jones, published by Pegasus Books. Reprinted with permission. All other rights reserved.

The Women of Aussie Noir 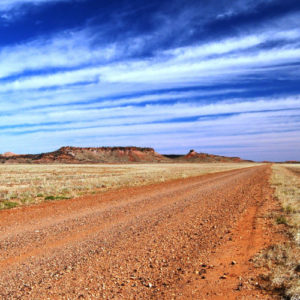 The Women of Aussie Noir The landscape of Australia is a harsh place to inhabit. Blazing heat, bushfires and long isolated roads are hallmarks of this...
© LitHub
Back to top