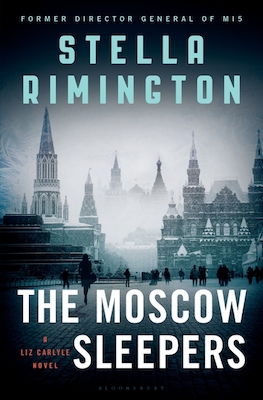 The following is an exclusive excerpt from The Moscow Sleepers, by internationally bestselling spy novelist and former Director General of MI5 Stella Rimington. In the following passage, Peggy Kinsolving, MI5 liaison with the CIA, encounters a challenging situation with some potential Russian spies.

In London the rain was steady and unceasing, as it had been for much of the preceding week, and it remained unseasonably cold. Peggy Kinsolving picked up her telescopic umbrella as it came through the outside scanner and opened it carefully so as not to shower herself and the security guard with raindrops. Then, head down, she ran up the steps of the US Embassy in Grosvenor Square.

As she sat in the lobby waiting to be collected, she wondered whether visiting the Embassy would be less or more hassle when it moved to its new premises in Wandsworth on the south bank of the Thames. More, she thought gloomily. She’d seen computerised images of what it would look like—a huge rectangular glass box on a circular island. She imagined the discomfort of getting there on a day like this and shuddered. It would be OK for MI6, she mused; they were practically next door.

In her present job in MI5’s counter-espionage branch, Peggy was the main liaison on espionage with the CIA Station in the Embassy in Grosvenor Square.

In her present job in MI5’s counter-espionage branch, Peggy was the main liaison on espionage with the CIA Station in the Embassy in Grosvenor Square. At least once a month she met the Station Head, Miles Brookhaven, to exchange information on current trends and cases. Peggy looked forward to these meetings, not least because she got on well with Miles. He’d been Head of Station for just about six months and was unusually young for the post. He was regarded by Peggy and her colleagues as a breath of fresh air after his predecessor Andy Bokus.

Bokus had always made it very clear that he disliked London and the Brits. In particular, he disliked his opposite number in MI6, Geoffrey Fane. The feeling was mutual and each man had set about further annoying the other by becoming almost a caricature of himself. Bokus had adopted an exaggeratedly boorish manner, playing up his humble immigrant background, while Geoffrey Fane, appearing as an archetypal English gentleman in his old school tie, three-piece suits and polished brogues, had patronised the American. It was a game observers suspected they both enjoyed, but it had made collaboration difficult, and Peggy and her boss Liz Carlyle were relieved when Bokus left and was replaced by Miles.

In contrast to Bokus, Miles was an Anglophile, having spent a year as a boy at Westminster School. He had been posted to London several years previously as a junior officer at the CIA Station. He was rumoured to have done stellar work in the Middle East, in the course of which he had been badly injured; it was assumed that the plum London posting was something of a reward.

Up in his office on the third floor, Miles was gazing out of the window as Peggy and the secretary who had gone down to collect her arrived in the CIA suite of offices.

‘Come in, Peggy. Call this a summer?’

‘I’ve been spending a few days with my mother. She goes to Chautauqua every year. It’s an old cultural centre up near Buffalo. The weather up there can get pretty warm in summer. I just got back this morning.’

‘You should have postponed this meeting,’ said Peggy.

‘You must be tired and I haven’t got anything urgent to report.’

‘But I have something for you,’ he replied. ‘It seems to be connected to that case we shared earlier in the year. Those two Russian Illegals; it was a pity you sent them quietly back to Russia. I would have liked to see them prosecuted, though I’m sure it’s not diplomatic to say so.’

‘I agree,’ said Peggy. ‘Though I probably shouldn’t say so either. But the FCO didn’t want to worsen relations with the Russians. I don’t suppose we would have learned much more than we know already, even if we had put them on trial.’

[Pullquote]’I don’t suppose we would have learned much more than we know already, even if we had put them on trial.’[/pullquote]

Miles said, ‘I’d like to ask Al Costino to join us. You know him, don’t you?’

‘Of course,’ Peggy replied. Costino was the Senior FBI Agent at the Embassy and a regular contact of MI5 on counter-intelligence and terrorism matters.

‘He can tell you what his head office has just learned.’

Miles reached for the phone on the table and punched in an extension number. ‘Hi, Al,’ he said. ‘We’re ready for you.’

Unlike Miles, Al Costino was dressed conservatively in a dark flannel suit, white shirt and the blandest brown tie. He had short dark hair and a broad pair of shoulders that testified to a lot of hours spent in a gym. From his features—he had a square slab of a face with a dimpled chin and, even this early in the day, a five o’clock shadow—you would have placed him on the other side of the law, a ‘heavy’ from central casting. But his face changed as he grinned at Peggy, holding out an enormous paw of a hand.

Sitting down heavily on a two-seater sofa, Costino looked towards Peggy. ‘I bring news from Bureau HQ and it’s hot off the press. So hot in fact,’ he said to Miles, ‘that Langley hasn’t even been told yet. It’s about this man we’ve been watching in Vermont.’

Miles turned to Peggy. ‘Do you remember that when our Russian source Mischa told us about the two Illegals who had been sent here to UK, he also said that there was another one in the States? But that this other one wasn’t in play because he was seriously ill and about to be admitted to a hospice?’

Peggy groaned. So this was the news, but it wasn’t very helpful. The hospitalised man in America had been the one remaining lead to the network of Russian Illegals they’d been told about. They’d also been told of another Illegal operating in France, but the French intelligence agencies had so far not made any headway identifying that one.

Al was still talking. ‘We kept a quiet eye on the dying man. His name was Petersen, documented as a Swede, lecturer at the University of Vermont. The hospice made it clear he wouldn’t be coming out, and we didn’t think he’d tell us anything if we made contact with him. So we just watched, waiting to see if anyone showed an interest or turned up to visit him. Nobody did, which was odd in itself. Until two days ago. Then, out of the blue a Swede named Ohlson turned up, just before Petersen died, claiming to be a childhood friend.’

Al scratched under his chin. ‘He said he’d driven down from Canada and he was in a car with Canadian number plates. All we’ve learned so far from the Canadians is that he hired the car the day before he turned up at the hospital. He showed a Swedish passport and gave the address of a hotel in Montreal. He’s not there any longer and the Canadians are trying to trace him. We’ve sent a guy up there to work the case. Someone with a lot of counter-intelligence experience. He’ll be very discreet.’ Peggy said, ‘If Petersen was the Illegal, what was he doing in Vermont? Is there anything special there to interest the Russians?’

‘Couldn’t it be the same thing as the two you caught here?’ mused Al.

Peggy shook her head. ‘I shouldn’t think so. The pair we caught here probably had a general brief to begin with—to stir up trouble in whatever way they could, back protest movements, foment disruption and anti-government feeling. Standard disruption stuff.’

‘If Petersen was the Illegal, what was he doing in Vermont? Is there anything special there to interest the Russians?’

‘But rural Vermont?’ asked Miles. ‘That’s not where you’d plant an Illegal with such a general brief.’

Peggy nodded. ‘No. That kind of stuff could only be effectively done in the capital or in a major city like New York.’

Al looked at them both. ‘And why is this new guy in Montreal? Is he a replacement for Petersen? What happens in Montreal that also happens in Vermont? And would be of value to the Russians?’

It was Peggy’s turn to shrug. ‘Your guess is as good as mine. Better in fact,’ she added with a grin. ‘I’ve never been to Vermont or Montreal.’

‘Perhaps he’s not based there,’ suggested Miles. ‘Maybe he just used it as a base to visit Petersen.’

‘Took him long enough,’ said Costino. ‘That guy was dying for weeks.’

The three of them sat in silence for a moment. Finally, Al Costino spoke. ‘Well, folks, thanks for your time. I guess I’ve given you something to think about. Questions but no answers.’ Turning to Peggy he said, ‘My HQ asked me to say that they’d be grateful for your cooperation on this one. As the Service with the most recent experience of this sort of activity, we’d really appreciate your input. And could you also brief your colleagues in MI6 in case they have any sources who might be able to give a steer on what is going on? And we’ll keep you informed, of course, if we learn anything more.’ With that, he unfolded his long legs, heaved himself up from the sofa and with handshakes all round left the room.

After he’d gone Peggy and Miles sat down again and looked at each other. They knew they were both thinking the same thing.

‘I believe our Station in Kiev still has an emergency method of communication. But they’ll have to agree to do it. He’s their source and they are responsible for his security. I’ll contact them and see what they say.’

‘Meanwhile I’ll brief Liz and Six about the mysterious Mr Petersen and his visitor from Montreal,’ said Peggy. Gathering up her now dry umbrella, she set off into the rain with a spring in her step.

From THE MOSCOW SLEEPERS. Copyright 2018 Stella Rimington. Reprinted by permission of Bloomsbury.

Molly Tanzer and Amy Stewart on History, Crime, and Politics 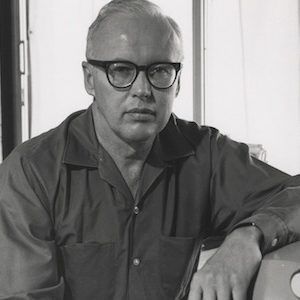 CrimeReads Brief: Week of November 18, 2018 Reeves Wiedeman on the family whose New Jersey dream home turned into a nightmare when they started receiving...
© LitHub
Back to top