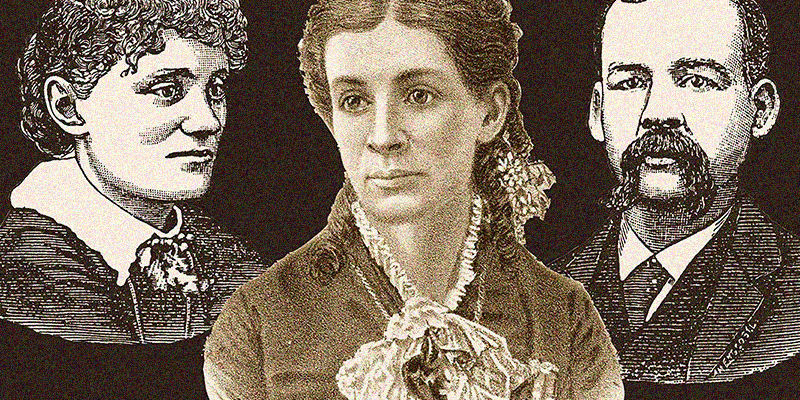 Sarah Graham was murdered by her husband and his new wife. Temperance advocate Emma Molloy helped them with the coverup. Inside the strangest murder case in Missouri history.

I first became familiar with the Sarah Graham murder case in 2000 as I was perusing Jonathan Fairbanks and Clyde Edwin Tuck’s Past and Present of Greene County, Missouri, published in 1915. I was struck by the authors’ assertion that the 1885 preliminary hearing for two of the defendants in the case was “the most spectacular court procedure in the entire life of the county,” and the more I delved into the story, the more intrigued I became.

The case had a cast of characters ready made for a real-life drama. A smooth-talking man with a troubled past who had been twice married to his first wife, the mother of his children. A second wife, a chaste young woman naïve in the ways of the world but completely devoted to her roguish husband. Most intriguing, one of America’s preeminent temperance revivalists embroiled in scandal and accused of hypocrisy by her enemies in the press and the liquor industry. And finally, a mob of vigilantes bent on dispensing rough justice, Missouri style. The case made headlines across the country, with the New York Times calling Sarah’s murder “one of the most shocking crimes ever committed in the West.” 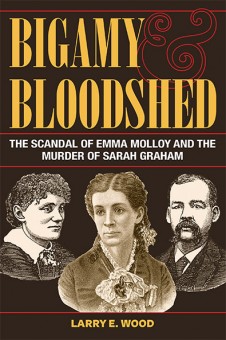 In 2004, I wrote an article about the Sarah Graham murder case for the now-defunct Ozarks Mountaineer, and I thought at the time I’d probably never write about it again. But something kept bringing me back to it. I included a chapter about it, similar to the magazine article, in my 2009 book, Ozarks Gunfights and Other Notorious Incidents, and the Sarah Graham case again made up a chapter in Wicked Springfield, Missouri published in 2012.

Born in South Bend, Indiana, in 1839, Emily F. Barrett was a bright girl, praised in school for her literary bent. Emily, or Emma as she came to be called, started submitting essays and poems for publication when she was just sixteen years old. Strong-willed and determined to establish her independence, she left home to teach school at about the same time.

Emma married printer Louis Pradt when she was not yet nineteen, and the couple moved to Wisconsin. The marriage was strained almost from the outset because of Louis’s excessive drinking, which Emma, who’d grown up in the Methodist Church, found very distressing. After the couple’s infant daughter died in 1863, Louis sobered up for a while, but when their only other child, an infant son, died less than a year later, Louis took to drink again, and the Pradt marriage was doomed.

Emma divorced Pradt in 1867 and married South Bend newspaperman Edward Molloy just a few weeks after the divorce was final. Molloy made Emma a full partner in his publishing endeavors, and, although her male colleagues saw her as a curiosity at first, her writing ability and business acumen soon won over most of her critics. In her essays, Emma advocated temperance and editorialized in favor of progressive causes like women’s rights. In 1870, she stepped boldly into the public arena by undertaking a speaking tour throughout northern Indiana on behalf of women’s rights. The same year she gave birth to her and Ed’s only child, a boy named Frank.

During the remainder of the 1870s, Emma became increasingly active in the temperance movement and earned a national reputation as one of the cause’s most eloquent speakers, astonishing listeners with “her wonderous powers on the platform,” as one newspaper observed. She also continued crusading for women’s rights and became involved in other causes, like prison reform.

On a visit to the Indiana North Prison in 1880, she made the acquaintance of convict George Graham. Articulate but unscrupulous, the twenty-nine-year-old Graham had repeatedly run afoul of the law from the time he was ten years old. He’d served two previous prison terms, and now he was doing a third stint, although he told Emma it was only his second. His charm and intellect won over Mrs. Molloy, who, as she later said, was always ready to help “the outcast and unfortunate.”

Emma divorced Ed Molloy in early 1882, and the couple parted amicably. Soon afterward, she became embroiled in a minor scandal when a married man started chasing after the good-looking, mesmerizing female orator. She was criticized both for leaving Ed Molloy and for breaking up another woman’s marriage. However, a board of inquiry found she had done nothing to encourage the wayward suitor, and her career as one of the leading temperance revivalists in the country scarcely suffered. But the real test for Emma Molloy was yet to come.

When Graham finished his latest prison term, Emma took him under her wing and gave him a job working on the Morning and Day of Reform, a temperance paper she published. A romance soon blossomed between Graham and Emma’s foster daughter Cora Lee, and Graham asked for the young woman’s hand in marriage.

Both Emma and Cora knew Graham had been previously married, but he assured them that his first wife, Sarah, had divorced him while he was in prison. What he didn’t tell them was that he and Sarah had remarried after he got out. Mrs. Molloy verified that such a divorce had occurred, but nobody thought to check for a second marriage.

In the spring of 1884, Emma Molloy came to Springfield, Missouri, for a series of revivals at the First Congregational Church. At the conclusion of the meetings, a prominent local citizen, Judge James Baker, arranged for her to purchase a farm a few miles outside Springfield near Brookline. George Graham and Cora Lee were married near the same time, and the newlyweds took up residence on the farm with Mrs. Molloy, her son, Frank; her adopted daughter, Etta Molloy; and Cora’s sister, Emma Lee.

In the fall of 1884, Sarah set out from Indiana with her and George’s two sons, intent on reclaiming her rightful place as George’s wife. George met them in St. Louis and accompanied them to Springfield, where he deposited the boys in a boarding house, telling them that he and their mother were going on to Brookline and that he would come back for them the next day.

George tried to talk Sarah out of continuing the trip, pleading with her not to “ruin” him. However, she insisted that she was going out to the farm to “clear Cora out,” and the two set off together toward Brookline. It was last anybody heard of Sarah Graham.

George Graham was promptly arrested on suspicion of killing his first wife, and he soon confessed to the dastardly deed. But how much help did he have?

In late February 1885, a search party pulled Sarah’s decomposing body from the bottom of an abandoned well on the Molloy farm. A coroner’s jury concluded she’d been shot and killed before her body was tossed into the well, and her murder was heralded as one of the most heinous crimes on record. George Graham was promptly arrested on suspicion of killing his first wife, and he soon confessed to the dastardly deed. But how much help did he have? That was the real question that faced investigators.

Cora Lee and Emma Molloy were arrested as accomplices, and their preliminary examination turned into a spectacle, due in large part to Mrs. Molloy’s prominence as an evangelist and temperance orator. The proceedings took a sensational turn when Charlie Graham, George and Sarah’s thirteen-year-old son, testified that he’d seen his father and Mrs. Molloy in compromising positions on several occasions, and near the end of the three-week hearing, George issued a statement confirming that he and Mrs. Molloy had carried on a torrid affair even as he was also bedding her foster daughter.

Both Cora and Mrs. Molloy denied the scandalous accusations, but many people rushed to judgment. As Emma herself said, “There are no two classes of people whom the world…so readily believe a scandal about” as “a minister of the gospel and a woman.” Mrs. Molloy, who, of course, happened to be both, continued, “When the two characters are combined, and a scandal can be concocted sufficiently ingenious for the public to swallow, however nauseating and polluting it may be, it is devoured with an ecstasy of delight.”

Cora and Emma’s hearing concluded with their being bound over for trial as accessories to murder, but the sensations in this case weren’t over. In late April 1885, George Graham was taken from the Greene County Jail on the Springfield square by a masked mob and hanged from a tree in the north part of the city. Critics of Emma Molloy even suggested that her powerful friends, like Judge Baker, had orchestrated the lynching to keep Graham from further implicating her and Cora.

Cora Lee’s first trial in 1887 ended in a hung jury, and she was acquitted on retrial in 1888. Shortly afterward, the charges against Emma Molloy were dropped, but the taint of scandal lingered, and she never fully regained her status as one of the most renowned temperance orators in the country.

So, who was guilty of what? Nobody thought that the vigilantes got the wrong man when they lynched George Graham in 1885, and, among those familiar with the Sarah Graham murder case, few would argue this point even now. But there are still today those who believe that Cora Lee and Emma Molloy were guilty as charged. I make a counterargument in Bigamy and Bloodshed, but not everyone will be convinced. What most of us can agree on is that Fairbanks and Tuck’s description of the women’s preliminary hearing as the “most spectacular court procedure in the entire life of (Greene County)” still rings true today, over a hundred years later.

Larry E. Wood has published 15 nonfiction history books, two historical novels, and over 400 magazine stories and articles. His latest book, Bigamy and Bloodshed: The Scandal of Emma Molloy and the Murder of Sarah Graham, is now available from Kent State University Press. 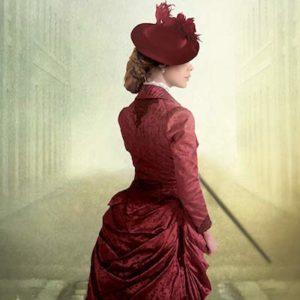 Sherry Thomas and Bella Ellis have long shared a mutual enjoyment and admiration of each other's work, even before they met in person....
© LitHub
Back to top