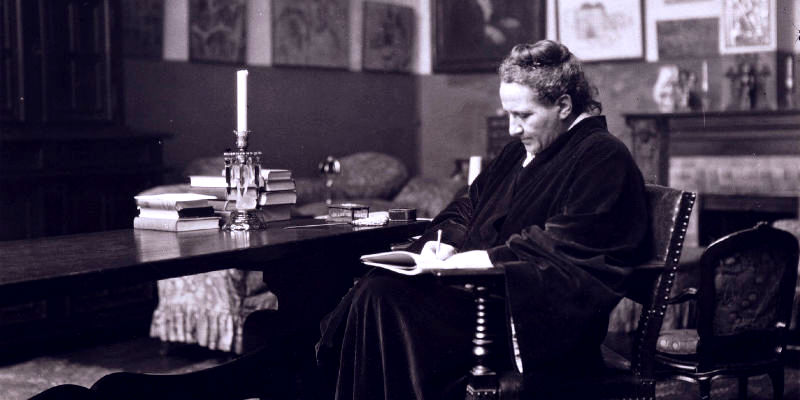 Whatever else had changed during her years living as a Parisian, Gertrude Stein had kept up on America’s criminals—Dillinger, Hauptman, Capone—and especially its crime fiction. “What are detective stories,” she wrote, “detective stories are what I can read.” In October 1934 Stein came home for a triumphant six-month lecture tour of America. When she and her companion Alice Toklas arrived in New York harbor, she had been away in France for three decades, writing Modernist prose and mentoring painters and literary exiles in her Paris salon. (Picasso had famously painted her portrait.) Her latest work, The Autobiography of Alice B. Toklas, was judged more approachable by American readers, who embraced it, making her return a news event flashed on the electric sign in Times Square. Stein and Toklas then rode in their first airplane from New York to Chicago for the debut of “Four Saints in Three Acts,” for which Stein had written the libretto. She had tea with Eleanor Roosevelt in Washington; in New Orleans, Sherwood Anderson showed the women the Mississippi River.

Crossing the country, Stein hunted up detective novels in drug stores, places she otherwise found “dirty” and troubling by European standards. In November 1934, Stein and Toklas spent two weeks living in the men’s dormitories at the University of Chicago, lecturing while studying “American youth.” One night they rode in the back of a squad car on an arranged crime tour with two Chicago police detectives, spending three hours searching for murders in the rain. To her disappointment, the streets proved as quiet that night as they were wet. “We went about for about three hours and there was no crime. They said rainy nights there is no homicide everybody stays at home and there is only really homicide when everybody moves around, as long as they stay home they do not unless it is a family row…” Stein had no interest in domestic crime.

The only violence Stein’s chaperones could produce that night was the distant shooting death of Baby Face Nelson north of the city, which crackled teasingly over the police radio as they drove. Nelson had inherited the FBI’s Public Enemy Number 1 status with the death of John Dillinger in Chicago months earlier; he machine-gunned two agents, who managed to wound him fatally, Stein learned; after running out of gas, he stripped off bloody clothing as he crawled into a ditch. Stein quizzed the detectives about whether they thought they could recognize a potential criminal in an unfamiliar town. They insisted they probably could, then, searching for any kind of sordidness as a consolation prize, the cops finally dropped their guests at a dance marathon, where no one was dead but some were barely standing.

By late March 1935, Stein’s tour reached Los Angeles, where a socially connected Beverly Hills hostess named Lillian Ehrman offered to throw Stein a party with all the best Hollywood people—Chaplin, Paulette Goddard, and a number of big producers. Stein told Alice to answer that they really just wanted to meet Dashiell Hammett: “I never was interested in cross word puzzles or any kind of puzzles but I do like detective stories,” she later wrote. “I never try to guess who has done the crime and if I did I would be sure to guess wrong but I like somebody being dead and how it moves along and Dashiell Hammett was all that and more.” Hammett had recently published his most popular novel, The Thin Man, which was now a hit film, and he was the hottest writer on both coasts.

After a number of calls (to Knopf, his publisher; to San Francisco, where he had lived; to MGM, at work on a Thin Man sequel) Mrs. Ehrman at last found Hammett himself, staying nearby, it turned out, at his favorite hotel in Los Angeles, the Beverly Wilshire. As the call reached him on April Fool’s Day, he at first thought the invitation was a prank, then decided to attend.

Stein was listening to Charlie Chaplin lecture on the uses of rhythm in cinema when Hammett appeared at the party.

Stein was listening to Charlie Chaplin lecture on the uses of rhythm in cinema when Hammett appeared at the party. But she happily turned her attention to the novelist in order to ask him about something that had bothered her, later recalling their discussion in her comma-free style:

“I said to Hammett there is something that is puzzling. In the nineteenth century the men when they were writing did invent all kinds and a great number of men. The women on the other hand never could invent women they always made the women be themselves seen splendidly or sadly or heroically or beautifully or gently, and they never could make any other kind of woman….Now in the twentieth century it is the men who do it. The men all write about themselves, they are always themselves as strong or weak or mysterious or passionate or drunk or controlled but always themselves as the women used to do in the nineteenth century. Now you yourself always do it now why is it.”

This may not have been the party-talk Hammett expected, but according to Stein he said the answer was simple: In the nineteenth century men had been confident, the women were not “but in the twentieth century the men have no confidence and so they have to make themselves as you say more beautiful more intriguing more everything and they cannot make any other man because they have to hold on to themselves not having any confidence.” Hammett’s current novel, which followed a hard-drinking former San Francisco detective much like himself, made Stein’s point quite well.

Two years after her American tour, Stein wrote a piece for Harper’s Bazaar called “Why I Like Detective Stories.” In it, she shared that her current favorite practitioner was now the English writer Edgar Wallace, who was “so good that there is no detection.” She also confessed that she had attempted her own detective novel (posthumously published as Blood on the Dining Room Floor) and found it a frustrating exercise, but one that at least deepened her respect for the form and its practitioners: “I tried to write one well not exactly write one because to try is to cry but I did try to write one.”

During her lecture appearances, Stein was often accused of using repetition in her prose. She denied that repetition even existed in art. As evidence,  she cited the detective story: It was forever the same but always different. 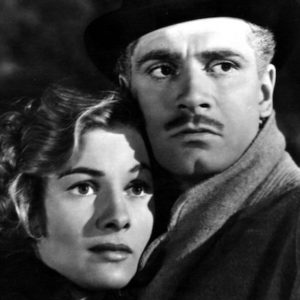 I don’t have a good story about the first inappropriate book I read at too young an age. There were so many books around...
© LitHub
Back to top