The Obsessive Nature of Bird Watching and Detective Work

On the Inherent Creepiness of Close Observation & Dogged Pursuit

If you were looking for a profession to compare with bird watching, you could do worse than detective work. For one thing, both occupations require a similar set of skills. There is the eye for detail; to note the signet ring on the suspect’s finger, perhaps, that matches the scar on the victim’s cheek, or that telltale eye stripe that marks the bird out as a rarity. There is also the patience that is common to both, the ability to wait for as long as it takes for the quarry to reveal themselves, and when they do, to have that particular kind of alertness to detect the faintest twitch of an upstairs curtain, or a whisper of movement among the branches. Most of all, they must share a similar temperament, one that embraces the solitude that comes with their profession, the isolation, the separation from the crowd. They have chosen to watch rather than participate, to operate on the margins rather than within the mainstream.  It is a lonely landscape they inhabit, but it is their chosen one.

These commonalities aside, however, individual birdwatchers are as varied in their approach as detectives. There are the casual types, the Easy Rawlins bird watcher, one might call them, who drift through their birding day picking up whatever sightings come their way. There are the dedicated drudges, the Sam Spade birders, unspectacular but methodical, putting in the hard yards, slogging through the toughest terrain in all weathers, the gumshoe equivalent of pounding the mean streets on the seedy side of town, while a veil of grey rain soaks them to the skin. Finally, there are the hunters, the dog-with-a-bone obsessives, unwilling, perhaps even unable, to let the pursuit go until they have run their quarry to ground.

What mysterious, probably illegal, possibly satanic activities are these people getting up to in the deep, dark woods?

Interestingly, it is at this end of the spectrum that the public perception of two activities seem to diverge. In a 2016 survey by Knox College, many people claimed they found bird watchers to be “creepy.” Those in the birding fraternity put the findings of this survey down to a fear of the unknown. They believe people see birders skulking off into the forest and are quite understandably unnerved. What mysterious, probably illegal, possibly satanic activities are these people getting up to in the deep, dark woods? Birders console themselves with the thought that if only the non-birding public knew the innocent pleasures of their pursuit, not only would they consider birding “uncreepy,” they would undoubtedly embrace the pastime themselves. But I would suggest it’s not unfamiliarity that is the cause of the general public’s unease with birders. It’s the obsessive behavior of birders at this far end of the scale. If you must hide in the bushes, for example, is it really necessary to do so fully-clad in camouflage gear? And as important as that bird undoubtedly is, does seeing it really warrant brazenly ignoring the No Trespassing: Toxic Waste sign on the fence? And as for situations when you might feel compelled to point your binoculars at someone’s bedroom window, well, let’s not even go there!

But, oh, how we love an obsessive approach in our detectives. Words like persistence, determination, relentlessness, all take on a curiously positive connotation when applied to sleuthing. And yet, should they? Set against the easygoing approach of, say, a Kinsey Millhone, is there not something inherently “creepy” about Miss Marple’s incessant poking around? When our suspicious spinster is on the case, no one’s secrets are safe. No conversation is secure from her eavesdropping, no stolen moment of passion remains hidden from her prying eyes. Creepy? To my mind, such insidious snooping is the very definition of the word. And yet, the mystery-reading public universally applauds Miss Marple for her approach, and holds her up as a shining example of her ilk.

Consider, too, Hercule Poirot, another detective who seems to ride the train to Creepytown far too often for my liking. The measured, methodical approach of a Harry Bosch, for example, is to be admired not least because it allows the detective to take a break occasionally to visit some neighborhood bar. Who can imagine Poirot halting his quest for the truth to give the little grey cells a rest at the local cocktail lounge? No, when Hercule is on the case, nothing shall distract him; he will not rest until he has probed every element of the case, parsed every sentence, examined every fibre. As effective as the Belgian maestro’s methods undoubtedly are, I would argue his obsessive, single-minded pursuit of the truth ranks considerably higher on the “creepiness” scale than that of a detective who takes time out every now and then to have a couple of drinks.

Of course, there is an argument to be made that bringing a murderer to justice justifies a slightly more rigorous approach than, say, tracking down a Red Warbler.

Of course, there is an argument to be made that bringing a murderer to justice justifies a slightly more rigorous approach than, say, tracking down a Red Warbler. However, in this particular instance, most birders I know would undoubtedly suggest that very much depends on who got murdered. If it was some treacherous ne’er-do-well who fully deserved what he had coming, then where’s the urgency? On the other hand, any method short of renting a helicopter seems perfectly reasonable if it means spotting the first Red Warbler ever recorded in the continental U.S.

Differing value systems aside, though, it seems clear that bird watchers and detectives are united at their core by two common elements. The first is their desire to solve the mystery, to discover the identity of the individual they pursue, whether rare or merely criminal, feathered or simply in disguise. And the same reasoning, as true of bird watching as of crime detection, will lead them to their answer. To paraphrase Sherlock Holmes, a man who knew a thing or two about birds himself, when you have eliminated all other possibilities, whatever remains, however improbable, must be the truth.

But perhaps most importantly, both bird watchers and detectives must come to accept that they will always be on the outside looking in. The role they have chosen for themselves guarantees they can never be part of the crowd. Their activities will always be viewed with suspicion, their motives misunderstood. And because of this, they will forever be considered outsiders. But the society that relegates them to the margins, these bird watchers, these detectives, needs to bear one thing in mind. They will still be out there, honing their common skills, pursuing their targets. And always, always, watching. Creepy thought, huh?

Steve Burrows is the author of A Shimmer of Hummingbirds, the fourth book in his Birder Murder Mystery Series, published by Oneworld Publications/ Point Blank Books. Steve Burrows has pursued his birdwatching hobby on six continents. He is a former editor of the Hong Kong Bird Watching Society Magazine and a contributing field editor for Asian Geographic. Steve now lives in Oshawa, Ontario. He is currently learning to juggle and play the banjo, though he accepts it’s unlikely he’ll ever be able to do both at the same time.
http://www.abirdermurder.com/ 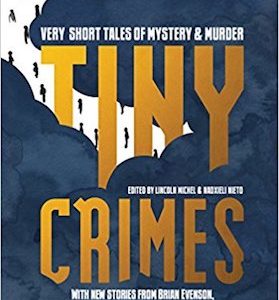 Gladys Gutierrez hated the IRS. In her mind, the IRS had destroyed her parents, crossing them out of her existence like disallowed...
© LitHub
Back to top