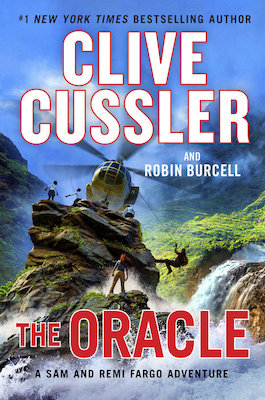 The following is an exclusive excerpt from The Oracle, the latest adventure in Clive Cussler and Robin Burcell's Sam and Remi Fargo series, in which the legacy of an ancient, cursed scroll threatens the lives of the young girls attending the Nigerian school funded by the husband-and-wife duo.

“What curse?” Remi asked as Renee led her toward the villa.

“Not that I believe in that stuff, but it was something about the last Vandal King’s brother being brutally killed because of it.” Renee stopped in her tracks, grinning. “With all the thefts going on around here, it just occurred to me that I should post warning signs. Property Cursed. Violators Will Suffer a Violent Death.”

They laughed, then continued down the uneven path for several more minutes to an area cordoned off with a chain-link fence. A padlock and chain hung on the open gate, and yellow caution signs warning Excavation in Progress were posted around the perimeter.

Renee pointed to their left. “Somewhere over there is where we think the stairs are located. Buried beneath tons of rubble and centuries of dirt.”

“I thought they’d discovered most everything there was to find and that the work now was all about preservation.”

“Exactly what I thought, until I got to know Amal.” She gave a conspiratorial smile. “That’s when I learned about the curse. That was the hook of her thesis. But the idea that the city extended farther than anyone had previously believed came from a strong oral history about Bulla Regia passed down through the women in her family. See that house up there?” she said, pointing past the dig site. “That’s where she lives with her mother. The olive grove covering the entire hillside and all the land just beyond it has been in their family for generations. The university rents the house there at the bottom of the hill for our crew.”

A gust of wind swept through the ancient trees, swirling the twisted branches. “A warning, no doubt,” Remi deadpanned as spent leaves fluttered to the ground.

“Let’s hope not. Last thing I need is to deal with the remnants of a centuries-old curse. Heaven knows it’s caused enough problems around here these last few months.”

“What sort of problems?”

“Trying to get local help. Somehow, word about the curse got out and, next thing we knew, no one would even step foot on our site.” She removed the chain, pushing the gate open. “Thankfully, our graduate students are nonbelievers. They’ve been great at picking up the slack.”

“Curse aside, what was in Amal’s history that brought you all the way out here?”

“Her photograph of a charcoal burner—or, rather, the lid to one—sitting on her mother’s mantel. According to Amal, her grandmother found it when she was a girl not too far from where we’re digging.” She handed Remi a hard hat. “The site is shored up with support scaffolding, but there’s always danger of a loose chunk falling from the molded-stucco ceiling.”

Remi tucked her sunglasses into her shirt pocket, then put on the hard hat. She followed Renee onto a wooden deck structure surrounding an opening from which an aluminum ladder protruded. Next to it, on the deck, sat a metal bucket and a thick coil of rope. “How deep is it?” asked Remi, peering down into the space.

“About eighteen feet.” Renee preceded her down, leading her through a jungle of scaffolding, platforms, and pulleys. “Just wait until you see the floor mosaic.”

The temperature dropped noticeably as they descended, and it took some time for Remi’s eyes to adjust to the softly light chamber. She could make out the dusty masonry of thin, flat horizontal bricks typical to Roman Empire buildings of the second century. At one end of the room was a large arched entranceway, behind which were huge masses of masonry where the ceiling had apparently collapsed. A work light was clamped to the railing on the first platform, its thick orange extension cord looped halfway down the side just above the rubble. “Remnants of the earthquake.” Renee turned on the light, aiming it toward an area marked off with yellow and black caution tape, one end tied to the scaffolding, the other secured to a wooden sawhorse. “We’re lucky so much of this survived.”

When the liquid washed away the film left by mineral accretions, the mosaic patterns shimmered with a remarkable depth, some with semi-precious stones, revealing a temple with a man lying on the bottom step.

She turned the light off and the two climbed down the ladder. At the bottom, she opened her canteen and poured water onto a portion of the mosaic. When the liquid washed away the film left by mineral accretions, the mosaic patterns shimmered with a remarkable depth, some with semi-precious stones, revealing a temple with a man lying on the bottom step. “Isn’t it stunning?”

“The man lying along the bottom step of the temple and looking down into the water is supposed to be Narcissus. You can see Echo there behind the tree on the other side of the temple. She’s exquisite.” Renee tried to brush what remained of her water over the floor. It quickly evaporated. “Or she would be. You really need enough water to get the full effect. I’ll go fill the bucket.”

“It’s not that far to the water tank. Take your time, have a look around. Just stay on this side of the yellow and black tape.”

Renee climbed up the ladder through the maze of squeaking scaffolding and decks, then pulled herself out.

Remi walked beneath the scaffolding that filled most of the anteroom, looking at the patterned mosaic, trying to imagine what it must have been like to live in that area centuries ago. Some of the mosaic pieces had come loose along a crack that ran beneath the rubble all the way across the floor to the other side of the room. She bent down for a closer look as the wind gusted into the chamber, causing the scaffolding and deck boards to creak like the hold of a ship. Closing her eyes against the sting of dust wafting down, she waited for everything to calm down. Soon, all was quiet and she turned her attention back to the mosaic, admiring the workmanship and wondering how long it had taken to place each tiny piece.

Remi looked up, saw her friend silhouetted above her on the top deck. “Still here.”

“Might want to move away from the opening in case I spill water on you. It’s a crude system, but try to guide the bucket so it doesn’t hit the mosaic when it lands.” She lifted the pail onto a hook, the rope creaking in the pulley as she turned the crank. The bucket was no more than a few feet down when a loud crack startled them.

“What was that?” Remi asked. Drops of water hit her as the bucket swung high over her head.

It took a moment before Renee answered. “The pulley, I think.”

“Whatever it was can’t be good. Maybe we should skip the water.”

Renee, still holding the rope for the bucket, nodded. But when she tried to straighten up, there was another crack and the water-filled pail rushed downward. Attempting to stop it, she slammed her foot on the coil of rope. It ripped out from beneath her foot, wrapped around her leg, and knocked her over the side of the scaffolding. Suddenly she was the one falling as the bucket flew upward. Remi braced herself in attempt to break her friend’s fall. But the rope went taut and the woman jerked to a stop, dangling above Remi’s head, too high for her to reach.

It wasn’t until Renee started spinning that Remi realized the rope wrapped around her leg was the only thing holding her up. “Grab the scaffolding,” Remi shouted.

Renee reached out, caught one of the pipes, and pulled herself to a stop. Several seconds passed before she gave what sounded like a small laugh. “Remember that frat party we went to our first year? This feels like that hangover.”

“It’s going to feel a lot worse if you fall.” Remi pulled out her phone to call Sam. No signal.

Remi eyed the length of orange cord hanging down the side of the scaffolding. “Not sure that’s a good idea. Hang on. I’m going to climb up. Maybe I can pull you onto the deck and cut the rope.” But the moment she stepped onto the ladder, she heard another loud crack as dirt and debris fell from above.

She froze. One more step and she’d bring the entire thing down.

From THE ORACLE. Used with the permission of the publisher, G.P. Putnam’s Sons. Copyright © 2019 by Clive Cussler and Robin Burcell. 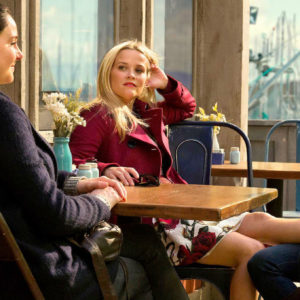 Let Us Recommend a Book Based on Which Part of 'Big Little Lies' You Like Best Summer is here! The temperature's rising, children are growing increasingly bored, and parents are at the end of their tether...
© LitHub
Back to top