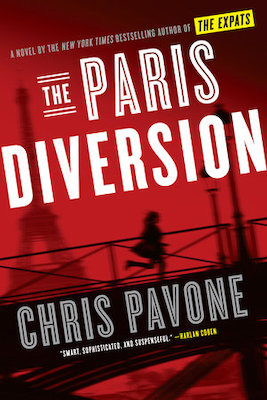 The following is an exclusive excerpt from The Paris Diversion, Chris Pavone’s latest thriller to feature Kate Moore, the director of a small team of undercover agents called the Paris Substation. The events of a single day entangle Kate, Hunter Forsyth, a money-hungry tech CEO, and Mahmoud, who is poised in front of the Louvre with a bomb.

Her arms are growing tired, with the big bunch of flowers, and the bag filled with a heavy dome of bread and a box of assorted gâteaux apéritifs for the obligatory cocktail hour, and fresh fruits and ripe cheeses and a bottle of Armagnac. She dutifully marinated her chicken in red wine, braised it last night, ready to reheat.

Kate cooks, it’s now something she does, she even owns an apron, which was a birthday present supposedly selected by the kids, though it was probably a not-so-subtle gesture by Dexter; Kate pretended to be overjoyed. She has even started teaching the boys to manage for themselves, nothing complicated, no fingertips shaved off by a mandoline, forearms scalded by burbling oil. Just marinara sauce, grilled cheese sandwiches, those sorts of things.

She spots Dexter across the boulevard, already installed with an espresso and Le Monde, still wearing his tennis clothes. As he crosses his legs, he kicks over the racquet propped against a chair, then bends to retrieve it and bangs his head.

She can’t help but smile. If she didn’t know better, she’d think it was an act.

They’ve been in a simmering feud for the past few weeks—no, it’s months now, but it was that recent trip to Champagne that really put her over this edge. It was Dexter’s idea to go see the cathedral in Reims, go on a winery tour. Evincing an appalling lack of awareness of how his children want to spend a Saturday. This ill-conceived trip came fast on the heels of a recurrence of Ben’s health crisis, reminding Kate of Dexter’s role in failing to mitigate it, to manage it. Also her own disappointment with herself for not being home to prevent it. Her reason for not being home.

But day by day, Kate’s anger has been ebbing away. She is once again willing to be amused by her husband. Though not yet willing to let him know it.

The traffic light changes. Kate steps off the sidewalk, not especially paying attention—

A flash of danger, coming fast on her left, it’s a truck swerving in her direction, turning onto the rue de Rennes, clearing out of the path of a pack of police cars speeding past, lights flashing but sirens silent, there must be a dozen of them. Kate leaps back, just barely not getting hit by the truck, which careens into the crosswalk, braking but not quickly enough, not before a few people scream as the tires screech and—

Kate drops her shopping bag, her flowers, and sprints over, ready to help, her mind running through first-responder checklists, don’t move any neck or back injuries, examine pupils, apply pressure to lacerations, tourniquets—

It’s a brown-and-white springer spaniel, still tethered to its leash, whose other end is held by a natty old woman whose mouth is wide open in horror.

The driver jumps out of the delivery truck, leaving his door open, and looks around like he’s coming upon the scene as a curious bystander, not his problem.

A flash of danger, coming fast on her left, it’s a truck swerving in her direction, turning onto the rue de Rennes, clearing out of the path of a pack of police cars speeding past, lights flashing but sirens silent, there must be a dozen of them.

The old woman starts to yell at him.

People are converging from every direction. A young woman kneels to the dog, puts down her motorcycle helmet, wearing tight jeans and tall boots and a distressed leather jacket, cigarette dangling from the corner of her mouth. She examines the dog, who with no warning clambers to his feet and shakes himself off, a full-body electrocution shake, as if he has just emerged from the cool lake, ooh that felt good.

The old woman bends over to stroke her pet gingerly, checking for injuries, the legs, paws, skull. Staring into the dog’s eyes, as if for signs of a concussion, asking the spaniel to count backward from ten, what’s today’s date, who’s the president.

A few people have begun to berate the driver, and Kate can hear a hysterical woman phoning the police. But the dog is now wagging his tail, thrilled with all this attention from strangers, normally the morning walks are so uneventful, we just go get the newspaper and then return to the apartment, plop down at the door and wait for something fun to happen, maybe today is cleaning-lady day.

Kate feels sorry for this truck driver, who’s trying to explain that the police were swarming in his rearview, it was his civic duty to get out of the way, the dog impossible to see down there…

The guy’s points are valid; some people are nodding in agreement, others are still livid. A middle-aged man with a terrifically hooked Gallic nose has anointed himself moderator, he’s wearing magenta jeans and a puffy vest over his tweed jacket, the outfit of a man who sees his rightful place as the center of anything.

Kate is finished here. She’s not going to get involved in any police reports about an uninjured dog.

“What’s all that about?” Dexter exchanges a peck with his wife.

“Spaniel got hit by that truck. Dog fine. People up in arms. How was tennis?”

He grunts, then turns back to the paper, studying up for another day at the computer, in this new career of his, which is not really so new. Kate thinks anything in the past decade is new—new to be a parent, new to live in Europe, new that Dexter is a day-trader. The Internet is new. Cell phones.

“Hey,” she says, “what’s with this?” She points at his new cap, made by the preferred brand of French outdoors enthusiasts, the requisite head-to-toe outfit to faire de la rando in the Pyrenees or the Dolomites. This brand doesn’t really belong in the wardrobe of the man who’s Kate’s husband; Dexter doesn’t hike, he’s not French, he’s not trendy. “What happened to your tennis cap?”

In Luxembourg he’d belonged to a club built on the grounds of a noble family’s old estate, a place where the whole village used to come every year for a hunt, back when that things like that went on. The land eventually evolved into a suburban development surrounding a tennis club whose logo is a kneeling rifleman, which makes a small amount of sense if you know the club’s history, but otherwise suggests that the club is a hunting one.

Kate’s phone vibrates. She doesn’t like being a person who jumps to attention at every electronic interruption, but with all the police zooming around, today is different. Many days, she tells herself something similar.

It’s a text-message from someone who’s identified in her contacts app as Pierre, at the butcher shop, telling her something she already knows: Undetonated bomb at Gare de Lyon.

The guy’s name isn’t really Pierre. He’s not a butcher.

From THE PARIS DIVERSION. Used with the permission of the publisher, Crown. Copyright © 2019 by Chris Pavone. 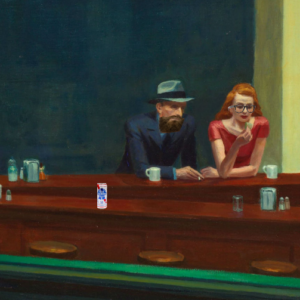 The Great Hipster Mystery: Defining a Canon In the scramble we enact at Crime Reads enact every January while putting together the Most Anticipated List I coined a neologism...
© LitHub
Back to top