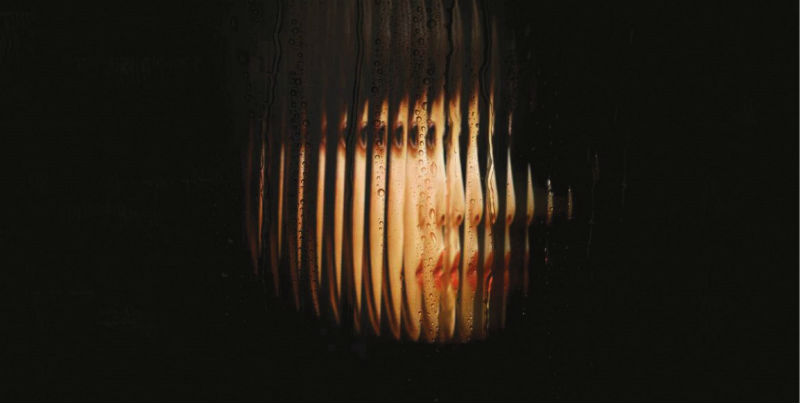 The Power of the
International Procedural

What happens when news from around the world looks like it’s emerged from a particularly unnerving brand of procedural fiction? This could encompass everything from Russia’s handling of the death of Sergei L. Magnitsky to the violent campaign against drugs ongoing in the Philippines. The procedural model here, though, seems less the purview of noble detectives unraveling right and wrong and more the world of brutal, corrupt figures wearing badges in the pages of a James Ellroy novel.

Reading fiction from around the world can be key to understanding larger geopolitical questions. Reading procedurals, which innately focus on questions of the law, societal norms, and questions of history, is especially edifying. Think of Paco Ignacio Taibo II’s novels featuring the detective Héctor Belascoarán Shayne, for instance—though they fall firmly on the hard-boiled side of the spectrum, they’re also enlightening as far as 20th century Mexican history is concerned, whether looking at cases of governmental brutality or the ways in which the United States has had a heavy hand in local affairs.

Some of that’s a question of perspective, and it leads to larger questions that can arise when reading fiction from another part of the world. To what extent is something taken for granted by one reader a surprise to another? Chan Ho-Kei’s The Borrowed, for instance, is set in Hong Kong over several decades, and featured nuanced takes on regional identity, authoritarianism, and state control. A reader based in Hong Kong might recognize those as aspects of recent history; a reader less familiar with Hong Kong’s politics might find themselves with a slew of new information to process.

Consider this a way of watching history filtered through the prism of a certain set of stories. Glaxo, by the Argentinian writer Hernán Ronsino (and translated into English by Samuel Rutter), is a tale of betrayal, toxic masculinity, and the way memory can deepen offenses into something worse. But in telling a chronologically fragmented narrative, it also reveals how authoritarian governments took hold in Latin America, and how business interests from the United States have left a horrific impact elsewhere in the Americas. It’s a taut and effective revenge story, true—but it’s also a lot more. 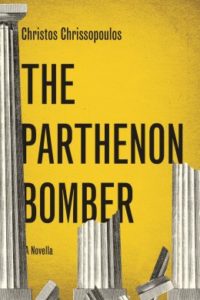 The crime is in the title in Christos Chrissopoulos’s The Parthenon Bomber. (John Cullen handled translation duties.) It’s less a whodunit than a short novel that asks the question of why. In the case of a crime against a historic site with thousands of years’ worth of symbolism and national identity wrapped up in it, the answer is a complex one. The novel is structured as a collection of found documents: statements from witnesses, lists of evidence, descriptions of the accused bomber’s trial, found images, and the bomber—a man referred to as Ch.K.—listing his own reasons for his crime.

There’s also a fair amount of criticism of contemporary Greece wrapped up in the narrative. At one point, the police are accused of “persecuting immigrants, marginal political groups, and other undesirables” as they go about investigating the crime. It isn’t only authoritarian tendencies that are under attack in this narrative. Chrissopoulos is also pursuing a larger question here, which is to examine questions of regional identity. After the Acropolis is destroyed, the result is confusion: “The loftiest emblem of our city is gone, and no one can get used to it. Even the street names sound sarcastic, as though they were there to underscore the loss.” If the most recognizable symbol of Athens vanishes, what does that imply about Athens?

Chrissopoulos creates a sort of intellectual procedural here. While the specter of mass violence in cities is never far below the surface, there’s also a conceptual component to the narrative; the balance between these two elements makes for a surreal narrative experience. On the one hand, this has all of the elements of a crime story: a crime is committed, the police follow leads, a suspect is arrested and tried, and balance is restored. On the other hand, it’s also about the inherent flaws in that narrative: the bomber’s manifesto is secreted away and destroyed for fear of intellectual contamination, which is posited as a wholly unrealistic method of responding to this event, even as it also seems plausible should a real-world equivalent to this event ever take place. 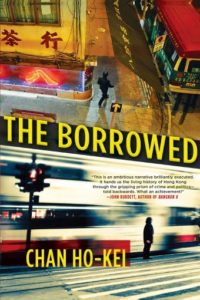 Chan Ho-Kei’s The Borrowed also uses the device of an investigation (several, in fact) to pose questions about identity, with a healthy dash of creeping authoritarianism. (Jeremy Tiang was the translator.) It’s a novel told through six mysteries, each one set earlier than its predecessor, beginning in 2013 and ending in 1967. They’re set in Hong Kong, and the cumulative effect is to showcase the city’s shifts in power over that time, and to find parallels and contrasts among them. This blend of structure and themes is one of the elements that keeps The Borrowed from feeling like a collection of novellas; another is the way that it deftly handles generational questions, on both sides of the law.

At the center of the book is Kwan Chuk-dok, a uniquely perceptive detective, frequently several steps ahead of everyone else in the narrative. In 2013, he’s gravely ill; his protege, Inspector Lok, occupies the center of the narrative as he attempts to uncover the solution to a mystery involving long-running grudges in an affluent family, along with a host of secrets that prove lethal. As the book moves back in time, one of the subtle pleasures of reading it comes from seeing how the status quo circa 2013 has come to be–and how some of the characters established there first appear in the narrative.

Immersing oneself in this novel in the United States provides the reader with a look at how Hong Kong has changed: in the sections set in 1967 and 1977, the British presence there is overwhelming, and the prevalence of the colonial system suffuses the narrative. Even before the narrative has reached that point, that element of history is present: the novel opens with the Hong Kong police oath in use until 1980, which includes a pledge to “faithfully serve Her Majesty and Her Heirs and Successors.”

For all of the historical echoes, shifts in technology, and immersion in the pop culture and geography of Hong Kong, there are some interesting subversions of the genre afoot. Chan also makes use of the device of the detective explaining the mystery’s solution to a group of assembled suspects–something that seems to borrow from the classic period of the genre, even as the sociopolitical context, questions of governmental overreach, and studies of surveillance push this novel to a more ambiguous place. It’s a neatly layered approach, and one that abounds with narrative payoffs and a growing sense of disquiet. 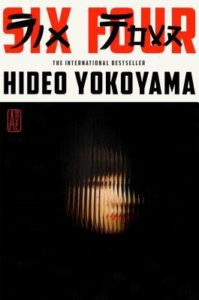 A shifting society and a vast span of years also play a role in Hideo Yokoyama’s Six Four. (Jonathan Lloyd-Davies is the translator.) The novel is set in the aftermath of a kidnapping, in which a young girl was abducted and killed. That’s all transpired years before the novel opens; at the time, protagonist Yoshinobu Mikami was a detective involved in the case. At the time that Six Four begins, he’s working in the police department’s media affairs office, which gives this book an interesting spin from the outset. The title, too, refers to something specific to Japan; as Terrence Rafferty put it in his review for the New York Times, “the crime took place just before the death of Emperor Hirohito put an end to the Showa period, which had lasted into its 64th year.”

Six Four builds slowly: initially, it’s not entirely clear where the novel is headed. The story of Mikami’s daughter, who has also disappeared? The search for a solution to what seems to be a cold case? The slow uncovering of a departmental cover-up in the case—suggesting a rogue element within the police department’s bureaucracy? Or is it about something else entirely? At one point, Mikami is told, “There are no distinctions, no headquarters, no Tokyo. The police force is monolithic.” Much of the novel is dedicated to interrogating whether or not that statement is accurate. And slowly, behind all of the discussions of crimes past and present, a power struggle between different governmental factions begins to reveal itself.

Having a protagonist working in a position outside of an officially investigative role–a little over a third of the way through the novel, Yokoyama writes, “Kidnappings brought with them the extremely delicate issue of the Press Coverage Agreement.” Devoid of context, this might come off as strange or detached; within the context of the narrative, the tense relationship between the press and the police slowly becomes an essential part of the novel. Taken in tandem with the interagency intrigue alluded to earlier, and it becomes clear that Yokoyama has discovered a way to make the particular structure of the police department—and its particular relationship to the media—into the stuff from which grand suspense can be made.

Some crime narratives can be intriguingly transposed from one setting to another. Akira Kurosawa’s 1963 film High and Low adapts the Ed McBain novel King’s Ransom, while Bertrand Tavernier’s 1981 Coup de Torchon adapted Jim Thompson’s Pop. 1280, shifting the setting from the American South to French West Africa in the 1930s. For others, the setting is a crucial part of the work: consider James Ellroy’s novels of corruption in Los Angeles, or David Peace’s Red Riding Quartet.

Crime fiction tells us a lot about its setting: what the relationship between individuals and the state is, how guilt and innocence are perceived, and what the process is by which crimes are investigated. Sometimes crime fiction from across an ocean can provide us insights into another nation’s concepts of crime and punishment; at others, it can shed light on our own national attitudes about those issues. Some of the best stories of crimes and investigations are revelatory even as they thrill us; these books, whether sprawling or concise, certainly do both. 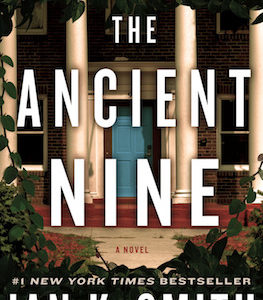 I TILTED MY head back and took in the cathedral ceiling of the marble-and-stone foyer. An uncanny replica of Michelangelo’s...
© LitHub
Back to top