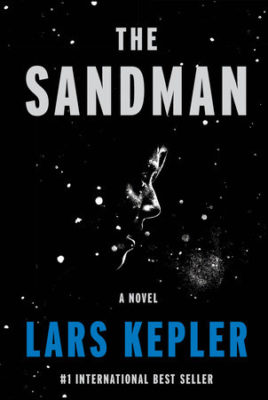 The following is an exclusive excerpt from The Sandman, the latest thriller from international bestseller Lars Kepler. On the cold outskirts of Stockholm, police find a man long believed dead at the hands of Sweden’s most infamous serial killer; his terrifying story launches agents into a dangerous undercover search. Kepler is the pseudonym used by wife and husband, Alexandra Coelho Ahndoril and Alexander Ahndoril, together a leading light of the Nordic Noir phenomenon.

A train is thundering through the nocturnal winter landscape. The locomotive is pulling almost three hundred meters of boxcars behind it.

In the cab sits the train engineer with his hand resting on the controls. The noise from the engine and the rails is rhythmic and monotonous.

The snow rushes out of a bright tunnel formed by the two headlights. The rest is darkness.

As the train emerges from the broad curve around Vårsta, the engineer increases speed.

He’s thinking that the snow is so bad that he’s going to have to stop at Hallsberg, if not before, to check the braking distance.

Far off in the haze, two deer scamper off the rails and away across the white fields. They move through the snow with magical ease and disappear into the night.

He brakes gently as the train heads out across the high bridge. It feels like flying. The snow is swirling and twisting in the headlights.

The train is already in the middle of the bridge, high above the ice of Hallsfjärden, when he sees a flickering shadow through the haze. There’s someone on the track. The engineer sounds the horn and sees the figure take a long step to the right, onto the other track.

The train is approaching very fast. For half a second, the man is caught in the light of the headlights. He blinks. A young man with a dead face. His clothes are trembling on his skinny frame, and then he’s gone.

The engineer isn’t conscious that he’s applied the brakes and that the whole train is slowing down. There’s a rumbling sound and the screech of metal, and he isn’t sure if he ran over the young man.

He’s shaking and can feel adrenaline coursing through his body as he calls the emergency number.

“I’m a train engineer. I’ve just passed someone on the Igelsta Bridge. He was in the middle of the tracks, but I don’t think I hit him.”

“Is anyone injured?” the operator asks.

“I don’t think I hit him. I only saw him for a few seconds.”

“Where exactly did you see him?”

“In the middle of the Igelsta Bridge.”

“There’s nothing but tracks up here—it’s a fucking railroad bridge.”

“Was he standing still, or was he walking in a particular direction?”

“My colleague is alerting the police and ambulance in Södertälje. We’ll stop all rail traffic over the bridge.”

The emergency control room immediately dispatches police cars to both ends of the long bridge. Nine minutes later, the first car pulls off the road from Nyköping with its lights flashing and makes its way up the narrow gravel road alongside the train tracks. The road leads steeply upward and hasn’t been plowed. Loose snow swirls up over the windshield.

The policemen leave the car at the end of the bridge and set out along the tracks with their flashlights on. It isn’t easy going. Cars are passing far below them on the highway. The four railroad tracks narrow to two and stretch out over the industrial complexes of Björkudden and the frozen inlet.

The first officer stops and points. Someone has clearly been walking along the right-hand track ahead of them. The shaky beams of their flashlights illuminate footprints and traces of blood.

They shine their flashlights into the distance, but there’s no one on the bridge as far as they can see. The lights at the harbor below make the snow between the tracks look like smoke.

Now the second police car reaches the other end of the deep ravine, more than a kilometer and a half away.

The tires crunch on the gravel as Police Constable Jasim Muhammed pulls up along the railroad line. His partner, Fredrik Mosskin, has just contacted their colleagues on the bridge over the radio. The wind is making so much noise in the microphone that it’s difficult to hear, but they pick up that someone was walking across the railroad bridge very recently.

The headlights illuminate a steep rock face. Fredrik ends the call and stares blankly ahead of him.

“What did they say about blood? Was there much blood?”

The blue emergency lights play upon the snow-covered branches of the pine trees.

“The ambulance is on its way,” Fredrik says.

There’s no crust on the snow, and Jasim sinks in up to his knees. He pulls out his flashlight and shines it toward the tracks. Fredrik is slipping on the track bed but keeps climbing.

“What sort of animal has an extra asshole in the middle of its back?” Jasim asks.

“That’s what my mother-in-law told the kids.” Jasim grins and heads up onto the bridge.

There are no footprints in the snow. Either the man is still on the bridge, or he’s jumped. The cables above them whistle eerily.

Someone is crawling along the track straight toward him. Jasim backs away and tries to draw his pistol. The figure gets to its feet and sways. It’s a young man. He’s staring at the policemen with empty eyes. His bearded face is thin; his cheekbones are sharp. He’s swaying and seems to be having trouble breathing.

The lights of Hall Prison are glowing through the haze below. Fredrik tries to contact their colleagues, but the radio just crackles.

They head farther out across the bridge. Fredrik walks behind Jasim with a flashlight in his hand. Jasim can see his own shadow moving across the ground, swaying oddly from side to side.

It’s strange that their colleagues from the other side of the bridge aren’t visible.

Out on the exposed bridge, the wind from the sea is bitter. Snow is blowing into their eyes. Their cheeks turn numb with cold.

Jasim screws up his eyes to look across the bridge. It disappears into swirling darkness. Suddenly he sees something at the edge of the light. A tall stick-figure with no head.

Jasim stumbles and reaches his hand out toward the low railing; he sees the snow fall fifty meters onto the ice.

His flashlight hits something and goes out.

His heart is beating hard, and he peers forward again but can no longer see the figure.

Fredrik calls Jasim back, and he turns around. His partner is pointing at him, but it’s impossible to hear what he’s saying. Fredrik looks scared and starts to fumble with the holster of his pistol, and Jasim realizes that Fredrik’s trying to warn him, that he was pointing at someone behind his back.

Jasim turns around and gasps for breath.

Someone is crawling along the track straight toward him. Jasim backs away and tries to draw his pistol. The figure gets to its feet and sways. It’s a young man. He’s staring at the policemen with empty eyes. His bearded face is thin; his cheekbones are sharp. He’s swaying and seems to be having trouble breathing.

The young man tries to speak, but coughs and falls to his knees again.

“What’s he saying?” Fredrik asks, with one hand on his gun.

“Are you injured?” Jasim asks again.

Jasim helps him up and sees that his right hand is covered with red ice.

The doors of the emergency entrance at Södermalm Hospital close. A red-cheeked nurse helps the paramedics remove the stretcher and wheel it toward the ER.

“We can’t find any identification. Nothing.”

The patient is handed over to the triage nurse and taken into one of the treatment rooms. After checking his vital signs, the nurse realizes the patient is in critical condition.

Four minutes later, Dr. Irma Goodwin comes into the ER, and the nurse gives her a quick briefing: “Airways free, no acute trauma, but he’s got poor saturation, fever, signs of concussion and weak circulation.”

The doctor looks at the charts and goes over to the skinny man. His clothes have been cut open. His bony rib cage rises and falls with his rapid breathing.

The young man lies with his eyelids closed, trembling, as the nurse puts an oxygen mask on him.

He looks strangely malnourished, but there are no visible needle marks on his body. Dr. Goodwin has never seen anyone so white. The nurse checks his temperature from his ear again.

Dr. Goodwin ticks the tests she wants to run on the patient, then looks at him again. His chest rattles as he coughs and briefly opens his eyes.

“Where do you live? Can you tell me where you live?”

“He’s delirious,” the nurse says quietly. “Are you in pain?”

“Yes,” he replies with a confused smile. “Can you tell me—”

“No, no, no, no, she’s screaming inside me, I can’t take it, I can’t, I . . .” His eyes roll back. He coughs and mutters something about porcelain fingers, then lies there gasping for breath.

Irma Goodwin decides to give the patient a vitamin B shot, antipyretics, and an intravenous antibiotic, benzylpenicillin, until the test results come back.

Through the door ahead of her, she can hear the staff nurse talking on the phone. Another ambulance is on its way in—a case of kidney failure. The staff nurse is putting together an emergency team and calling a surgeon.

Irma Goodwin stops and goes back to the unidentified patient’s treatment room. The red-cheeked nurse is helping the other nurse clean a bleeding wound on the man’s thigh. It looks like the young man ran straight into a sharp branch.

She stops in the doorway.

“Add a macrolide to the antibiotics,” she says decisively. “One gram of erythromycin, intravenous.”

The nurse looks up.

“You think he’s got Legionnaires’ disease?” she asks in surprise. “Let’s see what the test—”

Irma Goodwin falls silent as the patient’s body starts to jerk. She looks at his white face and sees him slowly open his eyes.

“She’s screaming, all the time!”

Irma leaves the treatment room and half runs to her office. She closes the door behind her, puts on her reading glasses, sits down at her computer, and logs in. She can’t find him in the Health Service Database, and tries the National Population Register instead.

She finds him there.

Irma Goodwin rereads the information about the patient in the emergency room.

Mikael Kohler-Frost has been dead for seven years, and is buried in Malsta Cemetery.

From The Sandman. Used with permission of Knopf. Copyright © 2018 by Lars Kepler. 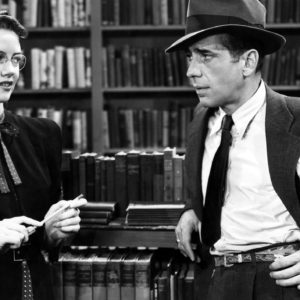 Readers Make the Best Sleuths Readers ask questions, lots of them. Every time we turn a page, there’s a kind of interrogation happening: of a story,...
© LitHub
Back to top