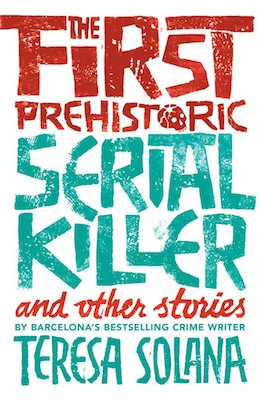 The following is an exclusive excerpt from “The Son-In-Law,” included in the new collection of short stories from Barcelona-based writer Teresa Solana,The First Prehistoric Serial Killer, a collection of short stories as bizarre and darkly humorous as the title of the collection itself. The following passage describes the start of a plan by two elderly women to gain satisfying revenge against a man who’s harmed their beloved.

Marta, my little girl, will soon be thirty-six. I’m seventy-four, and it’s no secret that Andreu and I were getting on when I got pregnant with Marta. Nowadays it’s quite normal to have your first baby at forty, but it wasn’t in my day. If you didn’t have a bun in the oven before you turned thirty, people scowled at you, as if it was a sin not to have children. The kindest comment they’d make was that you weren’t up to it. If you were married and childless, you suddenly became defective.

Marta is an only child. As she was such a latecomer, the poor dear didn’t have a brother or sister. Apart from Carmeta and Ramon, who are kind of substitute aunt and uncle, my little girl doesn’t have any real ones, or cousins for that matter. From the day we buried her father, may he rest in peace, Marta’s only had Carmeta and me; you can hardly count Ramon, Carmeta’s husband, since he had his stroke. Carmen has to feed him with some sort of puree she buys at the chemists that she administers with a syringe through a rubber tube that goes in through his nose and down to his stomach, a torture that’s simply prolonging his agony because his doctors say he’ll never recover. They insisted to Carmeta that Ramon isn’t suffering, though we spend the whole blessed day with him and aren’t so sure about that.

If it hadn’t been for his stroke, I’d cross my heart and swear Ramon would have rearranged my son-in-law’s face and things would have turned out differently.

Carmeta’s the same age as me, and, though I can’t complain about my health, she’s rather the worse for wear. A cancer she can’t see the back of. She and Ramon didn’t have children, and both doted on Marta like an aunt and uncle from the day she was born. My daughter loves them, and they love her. If it hadn’t been for his stroke, I’d cross my heart and swear Ramon would have rearranged my son-in-law’s face and things would have turned out differently.

A pity none of us was in the know a year ago.

We were completely in the dark.

Even though we sometimes said our little girl seemed to be behaving a bit strangely. Sluggishly. As if she were unhappy. But we all have our off days, don’t we?

Our little girl put on a brave front. Partly because she didn’t want us to worry, and partly because she was embarrassed to acknowledge that her husband beat her. If I’d never decided to buy some pastries and pay her a visit one day after accompanying Carmeta to her chemo session, I expect we’d still be none the wiser and it would be life as usual.

That morning, when Marta opened the door barricaded behind a pair of huge sunglasses, our alarm bells immediately started ringing. Something was amiss. She pretended she had conjunctivitis to justify the dark glasses indoors, but Carmeta, who’s a suspicious sort, didn’t swallow that and snatched them from her face. Our hearts missed several beats when we saw that black eye lurking under layers of make-up.

At first she denied it. Carmeta and I are no fools and applied the third degree, and she finally caved in. In floods of tears she confessed that her husband drank too much and beat her now and again. A punch, a slap, a shove … When he calmed down, he’d put it down to stress at work. He’d also say he would kill her if she ever told anyone.

From that day on we never referred to him by his name again. My son-in-law became the Animal, the Son of a Bitch or the Bastard.

I saw a bruise on my little girl’s left arm and told her to strip off. The poor thing couldn’t bring herself to say no and agreed, reluctantly. Then Carmeta and I burst into tears. Our darling Marta was black and blue all over. From that day on we never referred to him by his name again. My son-in-law became the Animal, the Son of a Bitch or the Bastard. We got weaving. We persuaded Marta to report him, and the three of us went to see a lawyer. Marta was afraid nobody would believe her and that the judge would take her child away, but the lawyer did a good job of reassuring her and, in the end, made a start on the paperwork. And it was true: with his executive suits and silk ties, the Bastard seemed like a normal person.

A cunt of a normal person who beat his wife and threatened to kill her.

And our little girl, quite naturally, was scared.

But now she had us on her side.

The Bastard went to live with his sister and disappeared from our lives for months. Marta, who’d been reduced to skin and bones by all the unpleasantness, even began to put on weight. Until one evening he appeared out of the blue at her place and said he was going to kill her.

It was only a matter of time.

Depending on his patience.

And Carmeta suddenly saw the light.

No well-intentioned law could protect Marta. If he put his mind to it, the Bastard would sooner or later do the evil deed.

No well-intentioned law could protect Marta. If he put his mind to it, the Bastard would sooner or later do the evil deed. As he said, it was only a matter of time. A matter of waiting until one of us lowered her guard or the judge decided there were more serious cases to see to and that our little girl no longer needed protection.

That she could manage on her own.

It’s not hard to intimidate someone. Or to kill them.

And, in the meantime, the Bastard would ruin her life.

Hers and everybody else’s.

It’s a piece of luck I have an attic flat and that it’s got a terrace. The woman mosso was right. Attics can be very inconvenient, but they have lots of advantages. And if you don’t agree, just ask the Bastard.

Article continues after advertisement
Attics can be very inconvenient, but they have lots of advantages. And if you don’t agree, just ask the Bastard.

Andreu and I rented this flat on the Eixample just before we got married, and the only thing my husband insisted on when we were courting and looking for a flat was that it should have a small terrace. My parents didn’t have a terrace because we lived on the third floor, but when the weather was good we’d go up to the flat roof and enjoy the cool of evening and gossip with the neighbours. I’d go there with my friends in the summer. We’d put our swimsuits on, lay our beach towels on the red tiles and imitate the film stars in our magazines, listening to the radio and drinking fizzy lemonade or tepid Coca-Cola, pretending it was Martini. Then we’d have to fight off sunstroke with aspirins, water packs and vinegar, but it was worth it. When you’re young, there’s a solution to everything.

It’s not that my little terrace is any great shakes. All the same, twenty-two square metres are enough for a pine, a lemon and an orange tree, a magnolia, a decent-sized jasmine and a bougainvillea, not to mention the dozens of pots of roses, petunias, daisies and chrysanthemums I’ve put in every cranny. When Andreu and I set foot on it for the first time, I could hardly imagine how providential this little terrace would turn out to be.

Because I don’t know how I could have helped my little girl without it.

And I reckon that’s what a mother’s for: to be around to give a helping hand to her children when they’ve got a problems. Whether they like it or not.

From the short story “The Son-In-Law,” included in the collection THE FIRST PREHISTORIC SERIAL KILLER, by Teresa Solana. Used with the permission of the publisher, Bitter Lemon Press. Copyright © 2018 by Teresa Solana. Translation © 2018 by Peter Bush. 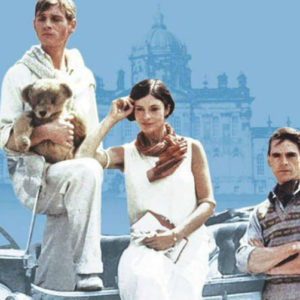 Fiction's Most Alluring Families One review of my novel Three Little Lies likened the family at the heart of the story to “like something out of a V.C....
© LitHub
Back to top