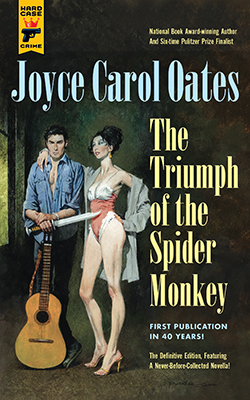 The following is an exclusive excerpt from The Triumph of the Spider Monkey, Joyce Carol Oates’s newly reissued novel about the making of a psychopath. Bobbie Gotteson had a dark childhood; abandoned as a baby, he was raised in abusive foster homes, teeming with anger, growing into a violent adult—one with ambition and drive—he sets off across the country to realize his dreams.

I can play sane, like you. Like everyone. Sometimes I played insane, but now I am very sane. My mind is a net, with holes in it that can be very tiny or quite large; to sift things through or to catch them.

Twice my life was saved by playing insane. The first time, in a jail in Reno on my way out here, I woke up and some old wire-bearded bastard was staring down into my face. His lips were moving. He seemed to see me inside, his eyes were really scooping into mine, and he started mumbling some words about his little girl. He grabbed hold of me and tried to embrace me. He said I had a little girl’s mouth, that it was his little girl, a terrible panic ran everywhere in me and I began to beat him around the face to make him let go of me, but he wouldn’t let go, he was shrieking now, and I butted at his face with the top of my head, in a rage, to make him let go of me. My little girl! My girl! Like hell I am your little girl, Gotteson raged, Gotteson with his muscles and his chest-hair and his deep bass voice, but when he fell down and grabbed my legs I saw he was hurt bad, there would be trouble, already the sheriff’s men were headed for us, so I proceeded to go crazy. It saved me from a beating. I was transferred to a psychiatric ward in a hospital that was very modern, and after a while charges were dropped against me, whatever they were, maybe loitering or vagrancy. I was always an expert actor. At another place where they give you tokens for behaving well, instead of beating you, I acted so well that I accumulated heavy sagging pockets filled with tokens.

By the time we smashed our way through a terrace door and into the sunken living room where a man sat watching television I was all on fire and could not have been stopped except by bullets.

Another time my life was saved by playing insane, out here. A contact came to pick me up, in a blue Ferrari, and he told me to leave behind my guitar because it wouldn’t be needed tonight. I asked him what was wrong. I asked if the client had changed his mind, if the party was called off, and he said well, no, the client has not changed his mind but the instructions were different from what I had been told. He said to put on a blindfold he had in the glove compartment. So I put it on. But I took the guitar with me because there wasn’t a safe place to leave it, and we drove out somewhere up into the Hills, that was pretty obvious, and I just relaxed and thought well hell, I would just relax and not even make nervous jokes to the man who was driving, but try to sit calmly, and relax. So we stopped somewhere out in the country. He said, O.K., take the blindfold off, it’s already past ten and we were due at ten, so we got out and he opened the trunk of the car and took out two leather thongs with fringes on them and a leather arm-band with something propped up on it. I asked him what the hell that was, but he said just to put it on, so I buckled it on my forearm and a car came around a curve just then, so in the headlights I saw that it was a bird pasted onto the arm-band, and it was so strange with its glass eyes and sharp curved beak that I stood staring at it while the car went by, and my friend shouted at me to wake up, or we’d both be in trouble. He had put on a helmet with a feathery fringe to it, going all around the helmet though longer at the sides and the back, and he told me to get going up through the brush and began to explain what the assignment was. We would be told to stop, he said, but we must not even pause—must shout No mercy! No mercy!—and keep on beating the client. I began to concentrate my powers inside my head. By the time we smashed our way through a terrace door and into the sunken living room where a man sat watching television I was all on fire and could not have been stopped except by bullets. The stuffed falcon shivered on my arm. The client, seeing my face, began to scream. But there was no stopping me and no mercy.

In a frenzy I slashed at the client’s bare exposed face and could not hear what people were shouting. A kind of blackness came over me. I seemed to fall through the floor, as if the thick white woolly carpeting of that expensive home vanished and there were coarse floorboards with cracks between them and boards missing in places, through which I fell in my excitement. On all sides I danced and lunged. I was wiry, wily. I was galvanized with energy as if energy shot through me in spasms.…And then I was being dragged somewhere, then someone was shouting at me that it was a mistake, we had broken into the wrong house, and I must stop what I was doing. Must stop! Gotteson need never stop, I told him. Why should Gotteson stop once he begins? It is all inertia, a vast mountain slow to begin its upheaval and then hungry to continue, in fact unstoppable. Gotteson showed no mercy.

And so I pretended madness, to save myself from disaster. Yet I was always sane. I am like you: a progression of states of mind, forms of sanity that keep moving and eluding definition. I was always sane and had practiced insanity so well that in falling through the floorboards I came upon an earlier wiser self, that seemed to know the way out of that house and had no need for the shouting of my friend. Outside, on the terrace, I was overcome by a flash of certainty, a forward-leaping vision of what I must do—what I had already done, in the future, and only needed to remember now in detail—and I wound the leather thong around my friend’s neck in order to strangle him into collapsing, not into absolute death, and so escape. All this was done with calculation, though it took place in two or three minutes—rushed and frenzied and noisy—and I ran back down the hill through the underbrush to safety.

A Maniac is immortal. He cannot be killed except by his own manipulations.

THE COURTSHIP OF THE SPIDER MONKEY

there she is awaiting him

alone in a hole

that is a room

in a house honeycombed

foot-over-foot up the side of the house

the master of gravity

concentrated as a bridegroom

the Moon and the Machete

The courtroom is restless. The third juror from the left, in the back row, is staring at the Maniac with a look glistening as the Maniac’s. There is something about the Machete that excites us all.

From THE TRIUMPH OF THE SPIDER MONKEY. Used with the permission of the publisher, Hard Case Crime. Copyright © 2019 by Joyce Carol Oates.

Once Upon a Time in Hollywood Noir 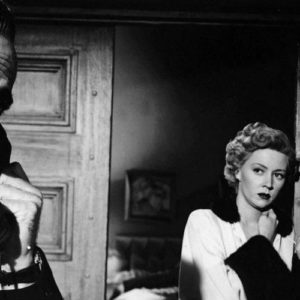