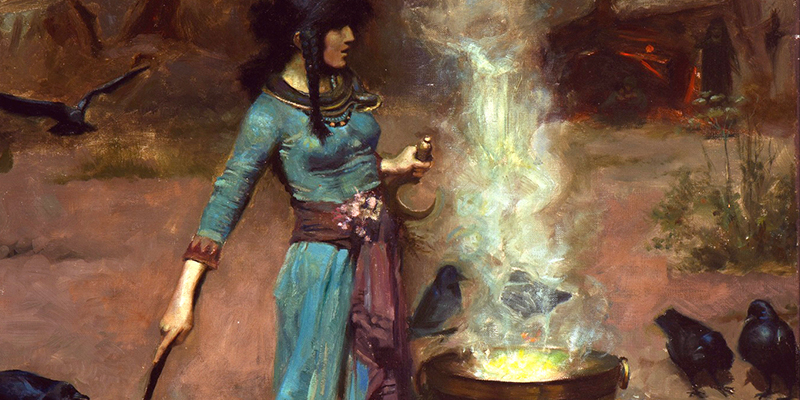 Whether dead or alive, witches always spell trouble. We can’t get enough.

Witches are powerful women. Like all powerful women, they have been maligned, persecuted, hated, desired, feared. They are eternal, mythical subjects, a source of endless fascination. In American history, they occupy a unique place where folklore blurs the lines of reality; we remember the “witches” of Salem, Massachusetts, who were not actually witches. They have become totemic figures in television, movies, books, and pop culture, and their appeal shows no signs of waning: as of this writing, the Peabody Essex Museum in Salem is devoting a full-scale exhibit to the power and imagery of the witch.

The witch has an interesting relationship to ghostlore; she is both part of it and separate from it. Though some lump the witch into the category “all things supernatural,” her status is somewhat distinct due in part to her complex and specific history, symbolism, and relationship to defined spiritual and cultural traditions. Yet where there are points of contact, the witch emerges as a curious but recognizable type of ghost. There are a few defining traits when it comes to the ghost-witch: first, she is generally the ghost of a woman who was accused or executed for witchcraft, whether she practiced it or not (usually not), coming back to seek revenge or draw attention to the injustice visited upon her. Second, she is often associated with a curse, and her powers transcend the grave. She is so strong, she bursts through the boundaries of death and comes back to wreak vengeance on the living. The witch as ghost, then, is defined by pretty much the same qualities as the witch as a living woman: she is powerful, fearsome, and not to be trifled with. The living witch can, however, be put to death; the real terror of the witch as ghost is that nothing can stop her.

Another thing these ghostly witches have in common? Rumor. They probably were never witches at all, and have been so dubbed due to some confluence of coincidence, circumstance, and urban legend—or, as it happens, rural legend, for most of these tales take place in small towns and rural or semirural locations. Aesthetics and appearance have a lot to do with it, whether it’s the appearance of the “witch’s” grave, or the appearance and demeanor of the woman herself. Every town is haunted by the idea of the old woman in a ramshackle house even if one doesn’t exist there. Fear of the crone is fundamentally at work here, and single, outspoken, and old women are always suspect.

In rare cases, the witch’s “curse” can at least somewhat be corroborated with local history, as with the witch of Yazoo City, an unpopular old crone whose deathbed vows surprisingly came true when the entire city burned to the ground a few years after her demise. An outcast old woman cursed the city to burn in a fire on May 25, 1904; after she died her prediction came true and a chain around her grave was found broken (the interpretation being that she escaped and got her revenge). This woman was dubbed a witch merely for her age and supposed but unsubstantiated supernatural powers, alleged mainly in hindsight and rumor. Attributing the fire to her curse merely solidified the legend, making it easy to believe that the witch continued to exert supernatural agency after her bodily death. Even if these stories are, for the most part, pure fabrication easily disproven, there is a collective desire to want to believe them.

A surprising number of so-called witches have in common one specific element: their grave looks a particular way. The grave of “Witch Bonney” in Lowell, Massachusetts, has piercing black eyes, outstretched hands, and a salaciously low-cut robe drooping low to nearly expose her breasts. It is said that her top falls lower and lower each day in October until she is completely exposed by Halloween. Teenagers love legend-tripping at her grave, and Wiccans regularly pay Witch Bonney tribute on Samhain night. In Tallahassee, Florida, the grave of Elizabeth Budd-Graham, nicknamed “Bessie,” evokes witchy symbols in its design, placement, and epitaph, leading locals (usually, again, teens) to ponder in awe this supposed “white witch” and her benign spirit, who appears to her grave’s visitors in their dreams. Her mysterious epitaph refers to a woman “doubly dead in that she died so young,” which some point to as evidence that she was a witch, because you “have to kill a witch twice.” But the quote is from Edgar Allan Poe’s “Lenore,” a poem about a grieving husband mourning his young wife, and not a coded or veiled reference to witchcraft. In both these cases, and in nearly every similar case, the most cursory historic research reveals not a shred of evidence linking them to any witchy activity. But the power of myth mightily and easily outmuscles the more prosaic truth.

Sometimes such stories can actually end up damaging the very graves and cemeteries they feature. The sad story of Mary Jane Terwilligar is one of these: The woman interred at Loon Lake Cemetery in Lakefield, Minnesota, is said to be an accused witch who was beheaded. So many legend trippers visited her grave, including members of Megadeth (who wrote a song about her, “Mary Jane”) that the entire cemetery ended up being repeatedly vandalized and her tombstone stolen. The tombstone is now in a local historical society, but many others have been irrevocably damaged or lost. The fact that Mary Jane was a domestic worker who died of diphtheria and not a beheaded witch doesn’t deter local legend.

Why do so many of the vaguest and most circumstantial stories end up getting pinned on “witches,” and why do so many involve exotic or unusual-looking graves? Is it a reflection in death of what happens to witchy women in life—that is, they are pigeonholed because they (or their graves) look a certain way? Maybe. It’s an intriguing question, and a good example is the story of Ida Black and the “Witch’s Curse” of Bucksport, Maine. In this case, a witch was entirely invented to explain a strange mark on a powerful man’s grave. The story involves so many commonly repeated tropes, conjured in the fires of urban legend, that it becomes instantly familiar and readily adopted, regardless of easy debunking. A vague “truth” immediately becomes taken for granted.

As with most of these tales, the “facts” of the stories are patently false, or at best unverifiable, but the ghostly legends are remarkably persistent, due perhaps to the unending allure of the witch. These are stories nobody seriously believes, but they are worth examining nonetheless as they demonstrate the imaginative power the witch still exerts over us all.

The other type of witch-as-ghost story deals with accusation and injustice. In these stories, an accused or executed witch haunts the site of her injustice, reminding us of the repercussions of scapegoating and fearmongering. Grace Sherwood, the last woman ducked for witchcraft in colonial Virginia, still haunts Witch Duck Pond; Mary Tyler, one of the Salem accused, haunts her family farmstead in Boxford, Massachusetts. Both outlived their accusers, but nevertheless return in spectral form to protest their wrongful accusations. Moll Dyer, accused of witchcraft in seventeenth century Maryland, ran away from her accusers into a frigid night and was later found frozen to death near a rock; you better believe her spirit comes back to haunt that site. And in Stratford, Connecticut, where Goody Bassett was hanged as a witch forty years before Salem, poltergeist activity at the nearby Phelps Mansion was attributed to her angry spirit.

In these stories, the accused witch laments injustice after her death. One such story is that of accused Salem witch Bridget Bishop. The reality of Bridget’s life and death is a maddening tale of paranoia and cruelty, but her spirit remains, quietly reminding those who are paying attention that something unjust happened in that town—it doesn’t matter how long ago—and that they sit on land wrongfully seized by those in power.

There’s also the “Bell Witch” in Tennessee. Her story is an anomaly, a local oddity more evocative of a poltergeist than a witch. This witch isn’t a wrongly accused or particularly troublesome woman. She is a disembodied spirit essentially endowing a powerless teenage girl with surprising psychokinetic abilities, giving her the kind of power that has driven countless teenage girls in modern times to dabble in Wicca. Thus the witch comes full circle.

In the end, the true allure of the witch rests in the concept of power. When in the historical narrative that power is stripped away from her—by being falsely accused or even executed, or by virtue of being a teenager, a minority, or the voiceless dead who cannot defend her reputation against slander—she comes back from beyond the grave to prove that nothing can stop her. This is a satisfying fantasy to consider. No wonder it is teenagers who continue to bear the torch of these tall tales. These witches display all the fantastic power the powerless ultimately crave. If nothing else, the witch is never forgotten, always remembered. Of all the female ghost tropes we have encountered while researching this story, the witch is one of the strongest. Nothing can silence her. Not accusation, not punishment, and certainly not death. 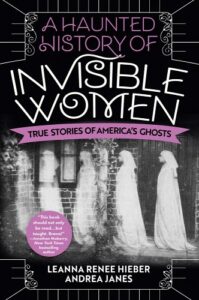 From A HAUNTED HISTORY OF INVISIBLE WOMEN by Leanna Renee Hieber and Andrea Janes, reprinted with permission from Kensington Books. Copyright 2021.

Leanna Renee Hieber is an award-winning author and paranormal history expert. A regular speaker at Sci-Fi / Fantasy conventions, she's appeared on film and television on shows including "Mysteries at the Museum" and "Beyond the Unknown." She's a three-time Prism Award-winner for her debut novel, The Strangely Beautiful Tale of Miss Percy Parker, and a Daphne Du Maurier Award-finalist for Darker Still. After earning a BFA in Theatre Performance and a focus study in the Victorian Era, she spent many years in the professional regional theatre circuit, skills that serve her well as a speaker and a ghost tour guide for Boroughs of the Dead in New York. Leanna lives in New York, NY and can be found online at: LeannaReneeHieber.com Andrea Janes is the Founder and owner of Boroughs of the Dead, New York City's premier ghost tour company, which has been featured on NPR.org, The New York Times, Jezebel, TODAY, The Huffington Post, Gothamist, The Travel Channel, CondeNast Traveler, Mashable, and more. Andrea is also the author of the YA novel GLAMOUR and several short horror stories, and a fiction horror novel Boroughs of the Dead, (the inspiration for her company). Visit boroughsofthedead.com 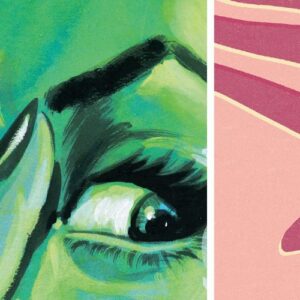 A look at the week’s best new releases. * Kate Atkinson, The Shrines of Gaiety (Doubleday) "[Atkinson] takes on London...
© LitHub
Back to top