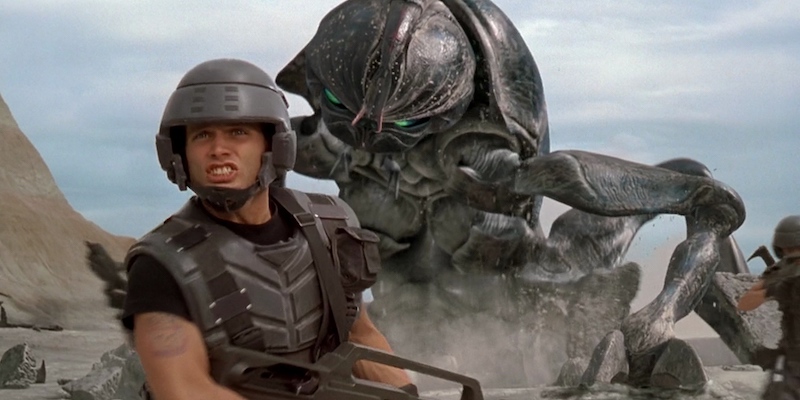 "[W]hen you think about it, [it] is somewhat unsettling. In order for writers to have authentic stories of fictional battlefields, they must first survive real world battlefields..."

As a writer of speculative fiction, by definition, I make things up. I imagine things into existence, at least on the page. It’s an act of creating something from nothing, and it’s limited only by one’s imagination. There’s a kind of beautiful of freedom in that. Andy Weir has never been to Mars, but that didn’t stop him from writing The Martian. Tom Clancy was never in the military, but that didn’t stop him from becoming one of the most prolific military thriller writers to ever work in the genre. Octavia E. Butler never had to trek across countless miles of lawless wasteland fighting for her life in the apocalypse, but that didn’t stop her from writing Parable of the Sower.

My point is, no one owns any particular genre. Anyone can write anything they like, and with enough skill—and a good amount of research—it’s absolutely possible to achieve believability. However, there’s something to be said about having that highly-regarded, holy grail of writing qualities… the element of authenticity.

You see, Weir isn’t an astronaut, but he is a computer programmer with a physicist and an electrical engineer for parents which provided him the background needed to have an intimate understanding of scientific processes, which in turn helped him write about the trials of fictional astronaut, Mark Watney. Clancy wasn’t military, but he was an insurance broker with a passion for naval history which influenced the creation of his iconic character, CIA analyst Jack Ryan. Butler wasn’t an experienced doomsday prepper, but she did grow up in a racially charged environment where she absolutely had to keep her head on a swivel in order to survive, which clearly informed her writing of the Earthseed series.

What I’m saying is you don’t have to be the thing you’re writing about, but it sure as hell helps.

I, myself, am a veteran of the United States Army, having served four and a half years active duty with two deployments to Iraq in 2003 and 2005. My debut novel, Wake of War, is a near-future military thriller about a second American civil war and the horrors those who have to fight in it are forced to face. I’ve been told by a legitimate source that the book is one of the most realistic military novels this person has ever read. Some other early feedback I’m seeing affirms this as well.

It goes without saying that I’m blown away by this praise, and incredibly pleased to hear that this book that I poured my soul into and worked hard to make an authentic and honest story is so far proving a success. And talking about authenticity, I don’t think I would’ve been able to write something like this without having the first-hand experience that I did.

I’ve walked through crowded war-torn cities. I’ve driven miles and miles through desolate, cratered nothingness. I know the smell of burning fuel and explosives. I know the sound of gunfire, and the compression you feel in your chest when an IED goes off nearby. I know what it’s like to look in the eyes of someone who wants nothing more than to see you dead. All of this experience bled onto the pages of Wake of War in one way or another.

Now, could someone with no experience at war write about this? Of course. You can do research, conduct interviews, watch films and documentaries. But somehow, in some indefinable way, it’s not the same as hearing it from someone who’s been there. Someone who’s lived that life and got the scars to prove it. I know I can tell when something is written by someone who’s been through the crucible of war. The honesty, the sincerity, the small details that breathe life into a scene and might otherwise have been missed by a writer who doesn’t have first-hand knowledge of the situation are all made evident by personal experience. And it’s in those details, those small pieces of reality that could only come from experience that draw you into a story and make it so much more engaging and visceral.

But besides realistic details, what else does military experience bring to the genre, you might ask?

Speculative military fiction, and fiction in general, allows us to explore potentialities. Possible futures that we might either want to strive for, or desperately avoid. Writing is a way to express ideas, work out answers to complex questions, discover new ideas altogether. Sometimes, writing can be therapeutic.

For me, writing Wake of War was something of a cathartic experience. I’m not afraid to admit that. Life can be chaotic and unpredictable, and often times the things we experience or are forced to endure can leave a mark. That can make it difficult to look in the mirror, but fiction provides a lens through which we can examine those rough spots. Fiction gives us permission to confront the darkness, to face the storm we might be holding back within ourselves. Because sometimes in order to truly consider the weight of a thing, you have to make it hurt. Like dressing a wound. You won’t do a damn bit of good if you don’t first lay eyes on the wreckage and figure out what happened, and what needs to happen next in order to fix it. Facing the damage is part of the healing process. It’s not easy, and it’s not for everyone. But it is an important part of the process, and military fiction written by people with real-world experience can help move the conversations around such topics in the right direction. We can all collectively begin to understand, at least to a degree, what that world is like.

Wake of War is a tough book that confronts some tough situations. It’s not a feel-good story with easily identifiable heroes and villains. Real life doesn’t work that way, not typically. There’s pain, loss, regret, rage. Sincerity, desperation, hope. Consequence is an important theme in this one. And in order to give the story weight, and to do so with an honest voice that doesn’t exploit the situation, I had to consider my own experiences quite a bit. This book wouldn’t be what it is, wouldn’t even exist at all really, had I not been through much of it myself.

Authenticity continues to be a highly regarded element of speculative military fiction, which, when you think about it, is somewhat unsettling. In order for writers to have authentic stories of fictional battlefields, they must first survive real world battlefields. Maybe one day it won’t have to be that way. Maybe one day these stories can help inspire conversations that move us toward more positive outcomes, and help influence a better future. 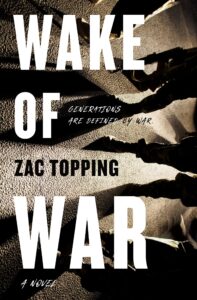 Zac Topping grew up in Eastern Connecticut where, contrary to popular belief, it's not all trust funds and yacht clubs. He spent his formative years on the move, as some do, and discovered a passion for writing early in life. He is a veteran of the United States Army and has served two tours in Iraq. He currently lives with his wife live in a quiet farm town in CT and works as a career fire fighter. Wake of War is his first novel. 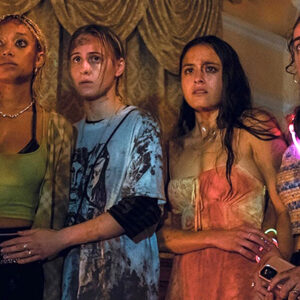 In Bodies Bodies Bodies, the new film from director Halina Reijn and writers Sarah DeLappe and Kristen Roupenian (of "Cat...
© LitHub
Back to top