The World Through Bonnie Parker's Eyes

On the trail of the Parker Gang, camera in hand...

Who was Bonnie Parker? We know the crimes she committed with Clyde Barrow and a smattering of other details: where she was born, where she grew up, that her father died when she was four, that her mother worked as a seamstress, that she was tiny in stature. We know she won first place in a spelling bee, wrote ballads, was married at fifteen. Family members said that she was hot-tempered and daring as a child, outgoing and generous as a young adult, that she doted on her niece and nephew and feared guns. Some of those she kidnapped reported that she drank, smoked, and cursed; others said she was charming and pitiable. One of the lawmen who killed her had been friendly with her when she worked as a waitress in a Dallas cafe. She regretted a playful photo in which she’d held a cigar in her teeth, because it made her seem coarse. 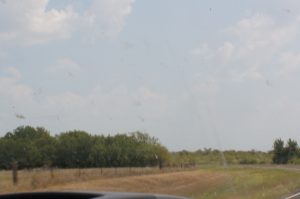 View of the country outside Dallas through a dirty windshield

Bonnie, my novel based on Parker, is my first foray into writing fiction about a historical character. Parker presented an ideal subject in that some facts about her have been well-established but many others are contentious and much of her life, especially the early years, is undocumented. In metaphorical terms, I had the bones of the story but was free to flesh them out. However, perhaps “free” is not the best word. Whatever I made up had to be true to the bones. To do this, I needed to visit the places that Parker had experienced—Rowena, Texas, where she was born; Cement City, Texas, where she grew up; the sites where she and Clyde Barrow clashed with police; the roadside in Gibsland, Louisiana, where she was killed, among other specific locations. I also needed simply to drive, as she and Barrow had, to try to glimpse what she had seen.

For two years, Parker and Barrow were fugitives and lived mostly in their car—or, more accurately, in other people’s cars that they had stolen. Perpetually on the run, they travelled unpaved roads through the South and Midwest—east as far as Georgia and the Carolinas, north as far as Michigan and Minnesota, and west as far as New Mexico. The vista from the passenger’s seat—deep blue skies and shallow gray ones, rich sunsets and star-speckled nights, miles of flat fields, regimented rows of corn, dense stands of trees—would all have affected Parker’s view of herself and of her situation. 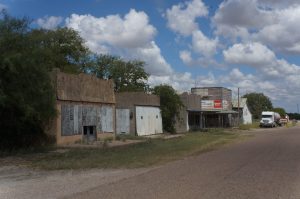 To write a novel, I need a palpable sense of place not only to conjure what I hope will be a vivid scene for my readers but also to understand and reveal my characters. Parker’s first understanding of the world would have been shaped by the West Texas town of Rowena, where she lived her first four years with her parents, Emma and Charles, and with an elder brother and a younger sister. In 1910, when Parker was born, Rowena was a small but thriving new town on a railroad line about 30 miles from San Angelo, populated mostly by German and Czech cotton farmers from Central Texas. In 2013, the town’s school had been closed for 50 years and commercial buildings were boarded up. Still, modest houses with neat front yards and an array of churches remained. In the cemetery, on a rise slightly south of the town, former residents were arranged according to religious affiliation.

Charles Parker was a bricklayer and it made sense that he’d worked on the large brick Catholic church, because its dates of construction matched the family’s tenure in the town. I was sure that Emma Parker would have impressed on her daughter her pride in her husband’s contribution to such a prominent building. The Parkers were Baptists, so their own church may have been the one with the tin roof. A roof that caught the sun, I thought, would have informed an imaginative little girl’s conception of God.

The day I visited Rowena, the sky was a typical West Texas azure, a brilliant backdrop for huge, low-drifting clouds, and distinctly different from the persistent summer haze that was muffling Dallas. Later, when I wrote about Parker’s time there, I envisioned her lying on her back with her hand outstretched, staring up at that sky and creating for herself the illusion of balancing one of those clouds on her fingertips. 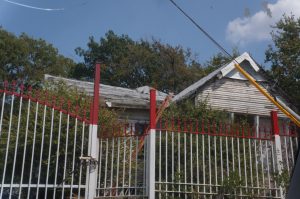 Cement City, where Emma Parker moved with her children to live with her parents and some of her adult siblings after her husband died, was harder to see through Bonnie’s eyes. The big cement factories for which the area was named, with their harsh, pervasive noises and smells, are no more. Dallas has encroached in a desultory fashion, so that the combination of heavy industry and rural landscape that characterized the site of Parker’s childhood had become by 2013 a loose mixture of light industry and residential pockets. I understand that today big box stores have mushroomed across from the old schoolhouse.

The house behind the security fence in this photo was the closest I could find to the farmhouse I imagined for Parker’s grandparents, based on a photo purportedly of a young Bonnie and her cousins among some tall weeds. Given the prominence of the cement factories in the area, it seemed likely that Bonnie could have gazed at the glow of one of them from her attic window as she fell asleep. 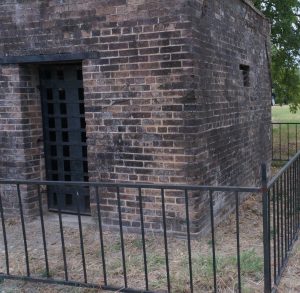 The first time that Bonnie Parker accompanied Clyde Barrow on a criminal endeavor—in this case, attempting to steal weapons from a hardware store—she spent a miserable night and day trying to escape police by running across muddy fields in the rain, riding a mule, and hiding for hours on the cold ground, before she was captured by a posse while Barrow escaped. She spent a night in this tiny jail (a calaboose, in the local vernacular) in Kemp, before being transferred to the Kaufman County jail.

Calabooses exist throughout Texas and their use between the mid-19th and mid-20th centuries testifies to the vast distances between population centers (distances Barrow exploited with his big-engined cars) and Texans’ willingness to take law enforcement into their own hands. Often miscreants were held in a calaboose until an officer of the law arrived. Calabooses have not been occupied for 70 years, but the one in Kemp adds to the sense that this town, like many of the other small towns that Parker knew well, froze in time when its prosperity evaporated. 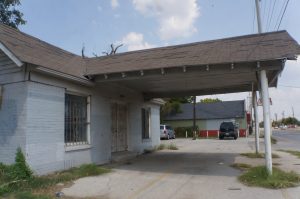 The West Dallas neighborhood in which Clyde Barrow’s parents eventually established a foothold after years of squatting in a makeshift camp on the bog land beside the Trinity River has never been prosperous. This derelict building was once their Star service station, with living quarters—originally a single-room shack—at the back. Barrow and Parker were both strongly attached to their families, particularly to their mothers, and the two returned regularly to this spot, if only to toss at the door a Coke bottle with coded instructions to meet along a road outside the city. 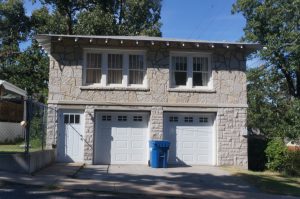 It’s disconcertingly easy to envision Parker and Barrow playing house for a few weeks in this essentially unchanged garage apartment in Joplin, Missouri. According to Blanche Barrow, Clyde’s sister-in-law, Bonnie had been suffering severely from the stress of the fugitive life. The couple’s sojourn here was meant to be a vacation from criminal activities to enjoy time with Blanche and Clyde’s brother Buck. Buck had recently completed a prison sentence, and Blanche was anxious that he remain law-abiding. Clyde encouraged the women to decorate the apartment with items from the 5 and dime, and the group played cards and worked jigsaw puzzles, like other Depression families.

One of the most difficult aspects of writing a novel based on a historical character was giving shape to the mess of real life while remaining faithful to the known facts. This building’s irregular rock siding excited me, because I remembered similar siding on a pair of houses in Rowena. I used the repeated pattern to underscore the yearning Parker felt for a return to the security of a home and family, even as her actions made this increasingly impossible. 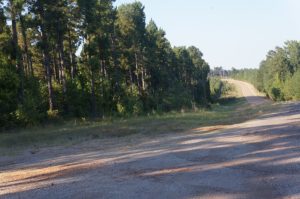 The Bonnie Parker that emerged from my research was a skilled storyteller, good at convincing herself of what she wanted to believe, even as she knew the truth. She told herself and her mother that Gibsland would give her another chance at happiness, that she and Barrow could stop running and settle there safely, outside of Texas but still close to Dallas. At the same time, she knew that they were by this time temperamentally incapable of living within the law and that they would inevitably encounter a police ambush that they could not escape. A pair of eyeglasses were recovered from the car in which she was shot at least 26 times when Barrow slowed at this point on the road outside the town of Gibsland, Louisiana. I can imagine her in the minutes before the ambush, playing with those glasses, sliding them up and down the bridge of her nose to alternately sharpen and soften her view. 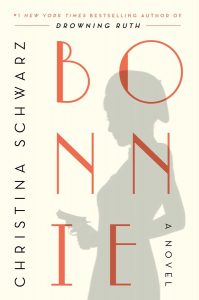 Christina Schwarz is the author of five novels, including The Edge of the Earth and the Oprah Book Club selection Drowning Ruth. Born and raised in rural Wisconsin, she lives in southern California. Her latest novel, Bonnie, is now available. 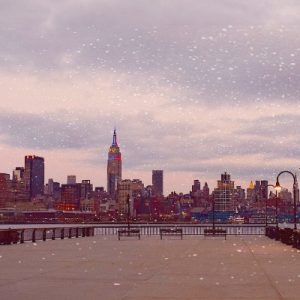 Perhaps it’s the diehard New Yorker in me, but I’m irked whenever someone mocks singer/songwriter Billy Joel. My friend...
© LitHub
Back to top