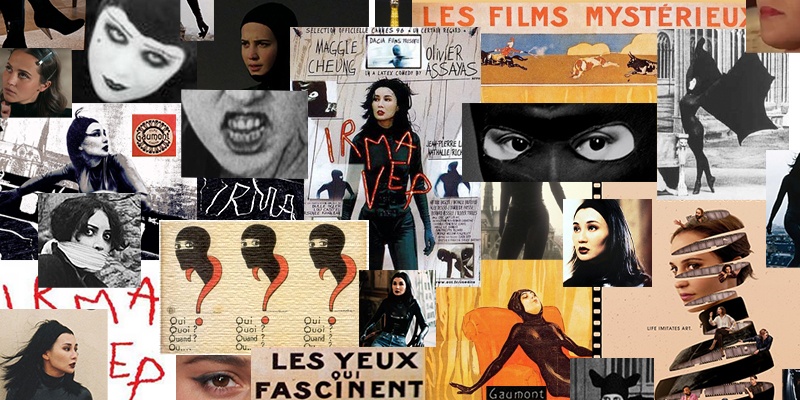 On some fundamental level, HBO’s Irma Vep was a seven-episode meditation on the allure of a woman in a catsuit. Director Olivier Assayas based the show on his 1996 film of the same name, and both film and series dig into our longstanding obsession with sexy women criminals on the screen. Both film and series are also about filmmaking: each depicts an attempt to remake Louis Feuillade’s silent film serial Les Vampires. Feuillade’s serial, at least in part, owes its place in film history to its indelible images of Irma Vep, its ravishing anti-heroine, slinking her way across the rickety rooftops of Paris. In both Irma Veps, this femme fatale is a complex sign that embodies the spooky, hypnotic and ethereal magic of cinema itself.

Feuillade’s Vampires, is a seven-episode serial released from 1915-1916. Its twisty, sprawling plot—about a cabal of jewel thieves that terrorize Paris—takes the classic elements of the 19th century mystery serials, amps it all up, and throws everything at the wall. There are decapitated heads, countless clever disguises, daring escapes, mass poisonings, and even a bit of hypnotism thrown in for extra kicks. Actress and polymath Musidora played Irma with a mixture of sloe-eyed vampiness and a demonic, bone-deep intensity. Her dynamic corporeal grace and virtuosic expressivity embody the particular magic of silent film. Les Vampires was a runaway success; its techniques and structure would profoundly influence great directors and shape the look of cinematic suspense.

Assayas’s decades-long obsession with Les Vampires is partly about the relationship between loving films and making them. He wonders what directors need from, or owe to, the past, and what kind of future cinema might have. The ’96 Irma Vep is a multifaceted gem of a movie: buoyantly comic and elegiac, witty and bittersweet. It’s both a love letter to cinema and its creativity and trenchant satire of the petty grievances and grubby financial considerations that constrain its potential. Here the Les Vampires remake—its financing barely cobbled together through a series of production companies and arts grants—is being directed by the high-strung, once-legendary director René Vidal. Vidal is played with an eerily silent vapidity by Jean-Pierre Léaud, the muse of director François Truffaut. He’s a relic of the nouvelle vague, a moment when French movies were at the cutting edge of world cinema. His presence is a sign of the existential crisis that runs through the movie: What is French cinema now? Does it have a place in a growing world of international blockbusters? Does doing a remake always mean impoverished creativity, or could a fresh take on old material produce something fresh?

The film glides along on the optimistic hope for a new kind of cosmopolitan filmmaking. Luminous Hong Kong superstar Maggie Cheung is cast as Irma Vep. René chose her because of the grace of her fight scenes in her action flicks. For him this violent elegance is the essence of the modern-day Irma. Cheung (playing herself) is a bit tentative in this environment, not entirely sure why she’s been hired for this role. But she does her best to be a low-drama team player even as the production melts down around her, maintaining her cool even as she gets poured into a leather catsuit in a sex shop. (Another nod to international cinema: Vidal’s vision of Irma’s look is inspired by Michelle Pfeiffer’s fetishistic look from Batman Returns.) She’s totally captivating when we see her play Irma (her balletic grace is undeniable), but more revealing when she’s interacting with the crew off screen.

The film’s most fun scenes show Maggie hanging out with Zoë, the ebullient and sometimes temperamental costume designer, played with infectious warmth with Nathalie Richard. (She’s in love with Maggie, and who can blame her? It’s patently clear that Assayas is as well, and the two were briefly married after the film’s release.) These freewheeling scenes are a love letter to the process of movie making, and the weird intimate camaraderie that develops even if (perhaps or because) everything’s falling apart.

The Irma Vep film is such a delight that it sort of seems a shame to have touched it. Yet in this age of the endless repurposing of content, remaking a film about a remake doesn’t seem so far-fetched, and it turned out to be fertile territory.

The Irma Vep film is such a delight that it sort of seems a shame to have touched it. Yet in this age of the endless repurposing of content, remaking a film about a remake doesn’t seem so far-fetched, and it turned out to be fertile territory. Assayas made enough changes to reflect the current state of the industry. The director, still named René Vidal, was rebooted, as it were. This René, played by bumbling charmer Vincent Macaigne, was warm and shambolically lively where Léaud was absent and aloof. There’s more of Assayas himself in the part, too: this René also made a previous film based on Les Vampires that starred his ex-wife; and Cheung’s ghost (literally) haunted both his production and the series itself. Macaigne depicted René as alternately equivocal about demons (he was very fond of his mood stabilizers and sunnily admitted that he’s not very fond of other people) and crippled by insecurity.

The foreign movie star playing Irma was also a big departure from Cheung’s performance of herself. Mira Harberg (played by Alicia Vikander), is an actress fresh off a smash hit superhero film, seems mainly interested in the Vampires project as a way to spend time in Paris until a tabloid scandal blows over. Vikander can be an interesting actress, but she can’t match Cheung in the charisma department, and the role of Mira wisely didn’t require it.

Jaded, sardonic and seemingly uninterested in her own stardom, she slouched and scoffed her way through premieres and interviews. Her blasé attitude had a kind of compelling anti-allure; there was something of Elaine Benes in her smiley-snide contempt for the many hoops that a star of her stature has to jump through. (She just barely grinned and bore it when she had to suck up to the cosmetic executive bankrolled the series in the hopes that she’d sign a modeling contract.) We gradually saw some of the reason for the smirk and sneers: she was on a hamster wheel trying to balance art and commerce in her career. Big-budget superhero movies allow her to do a project like The Vampires, but to make The Vampires she has to do the cosmetic ads. And so it goes.

As subplots and a series of minor catastrophes unfold, the question remained: “Why Feuillade? Why Les Vampires?” It’s a question many of the cast and crew asked, and the audience needed to ask it of Assayas. Why a twenty-six-year obsession with this particular film? What does Les Vampires mean as an emblem of the cinematic? The series Irma Vep got the time and space to really delve into this question, and the answers were sparkling and magical. In Les Vampires, Assayas sees cinema as snaking and swirling, a grace of movement and the quest to capture the ephemeral and the ethereal. More profoundly cinema is magic and spirituality, and the summoning of the supernatural. It was extremely compelling about the way that Mira changed through some alchemical process as she starts to embody Irma’s persona. As she slinks around in the catsuit, as she learns the moves of her demonic dances, she seems to come into possession of her body in an electrifying way. The loopy turn the story took—where Mira starts to inhabit Irma’s persona in her real life (and developing some supernatural powers of her own) was a way of making the viewer feel the expansive magic of filmmaking itself.

The great development that the series provided was an extended and layered portrayal of the relationship between an actress and a male director. Both the film and series are unusually perceptive about this dynamic, and how it is more complicated when the actress is playing such an obvious sex symbol. There’s something very deep here, and something male directors rarely bother to explore with any seriousness or finesse. It’s easy to look at Assayas’s and Cheung’s subsequent relationship and dismiss the ’96 Irma Vep as just an elaborate pickup line, and maybe it was, but it was also much more than that. The film is very aware of the ways actresses are expected to buffet the egos of male directors. There’s a scene where René has a mental health crisis, and Maggie is sent to deal with him. Maggie knows what’s expected of her, and we see the discomfort beneath her cheerily ingratiating demeanor as she tries to placate him and restore his faith in the project. It’s an unsettling, and eerily prescient scene, given that the biggest US distributor of French films at the time was Harvey Weinstein.

The Irma Vep series beautifully expanded in its strongest plot line: the developing relationship between René and Mira. It’s a complex, and deeply heartening story about the relationship between creativity and collaboration, admiration and desire. At the heart of René and Mira’s work together is the question of who, or perhaps what, Irma Vep really is. Can this character be portrayed as something other than a fetish object? Can she be a fetish that women can also get pleasure from? Can she be successfully portrayed as an empowering bad girl, the talented artist that Musidora was in real life?

When Mira and René met and had their first conversation about Irma, it was like a platonic, creative romance: ideas crackled as they built the character together. As in the film, René had a depressive episode and was replaced on the production, but in a plot twist Mira used her star power to get him back on the set, and the odd rapport between them to restore his confidence in the project. Here, again, it fell to the actress to restore the director’s ego, but the depth of their relationship made it land differently. Mira realizes she needs René; his Irma Vep unlocked something in her that made acting real for her again. The question of desire came into play. When controversy arose about a scene where Irma is molested after being rendered unconscious, it sent René into a tailspin, wondering if he’s a “sicko” for finding the scene erotic. Mira reassured him, but the conversation occurred on a level of parity, without abuse of any power dynamic.

The inevitable parting of Mira and René, as she goes off to play a dream part with a bigger director, was adult and elegiac, a severing of a kind of spiritual bond they share through Irma. René told his therapist that his platonic bond with Mira is just as special as the romantic bond he shared with his ex-wife on the original Irma Vep. In closing the series on this odd farewell, all the series’s nostalgia, and its hopes for cinema’s future as spectral magic made us keenly feel its intelligent, wistful mood. 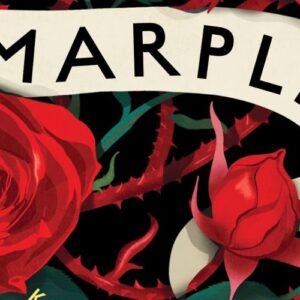 A look at the week’s best new releases. * Yasmin Angoe, They Come At Knight (Thomas and Mercer) “A second round...
© LitHub
Back to top